It was only a couple days ago when X446 had her calf, and wouldn't you know it but the others felt the need to stop waiting to get the show on the road. I did my early morning walk around the pasture, and one of the sure signs that a calve is going to get born is to see the expectant mother off on her own, away from the participating in the normal herd gathering.(There are other signs but I'll spare you)

X406 was all alone, hundreds of yards away from the others, hidden behind the same dog fennels that had so well hid X446's calf. I decided not to approach her; I could hear her thinking "Geez, don't I get a little privacy?". But I suspect humility is not a common emotion amongst cows, after all, it has been many a time when they'll drop their load while looking at me straight in the face.

I returned to the house in anticipation.

That afternoon what I had anticipated came true. On the opposite side of the field X406 had her calf. Maybe she did the cow's equivalent of jumping jacks on the trip over in order to spur this birthing process on. I don't know. The calf was on the ground, getting tongued by her mother as all the other cows watched on. It was T29's turn next. 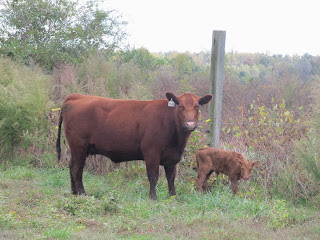 Have you noticed I haven't given them names? Even though you are told not to give them human names should they eventually be served on your plate, the fact is that I have called them by their tag numbers for so long that it might as well be a name, albeit unconventional. They have their own personalities too, so it is hard not to have some kind of attachment. X446 and X406 are the youngest of the four, having been born back in 2010. I'm guessing that they each weigh 1300 pounds or so. Light in frame relatively speaking. They both tend to be followers and will keep a safe distance away from me. Neither is assertive with the other two cows, and as far as mothering is concerned, they will keep an eye on their calves but they don't have any problem putting real distance between them. The only real reward of having the calf right next to them is that the calves will want to readily relieve the mother of udder pressure. You can tell that weaning these calves is right up there on their priority list.

U204 was born in 2008, and compared to the others she is the buffalo of the crowd, easily at 1600 pounds. Absolutely huge. With that she has some obvious strengths....one of them is to bully everyone else away from the mineral barrel or the pails full of corn I occasionally bring out to the field. Don't ever get head-butted by U204; she'll send you into the next field. One thing strange about her behavior is that she really is the matriarch of the group, putting a watchful eye on the calves even though they aren't hers.She will quickly walk over and block them from me should I get close. And the other thing that is at odds with this behavior is that she is the only one that will let me pat her on the shoulder. Shy of the ever so often smell and tongue lick by the others to see if I, as a human, am good to eat (or maybe to identify me), the rest all stay at a full legs reach.

T29 was born in 2007, the oldest of the clan. When I am around she keeps a very close watch over me. She will never allow me to get too close, and I think she treats the others in the same fashion. Though the herd may shuffle around the pasture during the course of the day, she always is slightly away from the others.

Of the four cows, all were artificially inseminated except U204. U204 needed a "cleanup bull" to do the deed. Hence why she is due to have her calf a full month after the others. Using AI is a preferred method to achieve pregnancy if you are trying to improve specific traits within your herd. As big as U204 is, I am surprised that a bull was found to be big enough to handle her.

Every day I go out into the fields and do a head check. T29 is due and one of these days I expect to see a third calf, or at least signs of one on the way. The sign came one evening when a hunter knocked on my door. It was well after sun down and he was on his way home after an afternoon of sitting in his deer blind waiting for a buck to walk by.

He didn't see a buck, but he did see a huge dark brown animal, bigger than any deer he has seen in this area. Upon readjusting his eyes he realized it was one of my cows, and he was nice enough to let me know I had a cow on the loose.

It was too dark for me to go looking for it, so I postponed my search until morning. Anyway, if I had gone out that night it would have spooked it and I am sure it would have bolted into the next county. When I did my head count in the morning, I found out it was T29, who had torn through the barbed wire fence......destroying it.........to find out if the grass was greener on the other side. The search was on.

Posted by Dave at the Vineyard at 4:28 AM