Thursday in Burgundy could be defined by the word: Locks. These were all semi-automatic locks, which meant that the crews of the passing vessels had to initiate the action that would take place, and once the signal was sent the locks would open and close as required. On this day we had nine locks to contend with, and before we were done we were pretty good at the process.

Before I continue it's important to include that at the end of our journey, Diane and I had the pleasure of spending an evening on another boat that was manned by an experienced husband and wife team. We had our wine , of course, and shared stories about our trip with the couple while they inquired about what Americans really believed regarding Europe and the World stage. We walked away with the recognition that all of our mishaps were normal for canal boating, and one has to have a warped sense of adventure, a tough skin, and the patience to crawl through all the problems.

We shoved off early that morning. We had been going to bed early to escape the chilly evenings on the boat, so at the first sign of the sun popping out we dressed quickly, made those instant coffees to get us going, had some pastry , and started the engine. It wasn't long before we reached our first lock.

According to the manual, these types of locks had some kind of radar that sensed our arrival, and once recognized a sequence would occur that altered the water level within the lock to be at our incoming level. Now if we had been lucky someone would have been coming downstream to have set all the water heights in our favor, but leaving as early as we did none of the locks had been pre-set, so we in effect started from scratch at each lock.

The lock gates opened and we slowly crept in, riding along one side until we got to the far end, adjacent to a steel ladder recessed in the wall. Next to this ladder was a pair of ropes: one red and one blue.

We had been told to never, ever, pull the red one. I guess this signals to the world that there is a major catastrophe in the lock and the police, marines, and coast guard would appear instantaneously to save the day. Not wanting to bring in France's equivalent to the National Guard, we did what we were supposed to do, pull the blue rope. More times than not this triggered the correct response. The gates behind us would close, the water would rise raising our boat with it, the upstream gates would open and we would be on our merry way.

Seems simple enough. However there was one time when Diane pulled the blue rope and it did nothing. From my vantage point I could see a problem. All the other times when Diane pulled it I saw the slack removed from the rope with an apparent toggle occurring up at the signal box mounted on a pole at the top edge of the wall. This time there was nothing, as if she hadn't pulled it at all. Diane yanked it again. Still nothing. We decided to switch positions, Diane at the helm while I went down on deck near the bow to try my hand at the rope. That didn't work either. It was now time for a different approach, so I started climbing up the algae laced ladder, only to find that halfway up the side the ladder it was missing a rung. OK, all I had to do was skip the gap and move on. Unfortunately, these rungs had been placed a bit farther apart than usual, so without one I had to literally pull on my knee while I held on tightly with my other one hand holding a slippery rung. This allowed me to be able to get the distance between my feet so as to advance up the ladder. 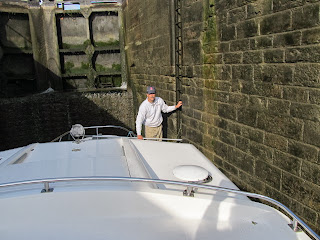 As they say I lived to tell the tale. I reached the top and looked at the signal box and ropes to find that the rope guide for the blue rope had somehow gotten crimped, hence why it didn't pull as required. I reached up to the box and grabbed the blue rope and pulled....Bingo ! I decided I was not going to go back down to the boat, but wait for it to rise and come up to me. Good decision.

Other locks were not as eventful, though on one occasion the boat hook that we were using to pull ourselves closer to the ladder got caught and was pulled out of our hands just when the boat lurched. The hook fell into the water and the good thing was that it floated. The bad thing was that in order to reach it in the water I had to lie flat on mid-deck, grab a bumper and super extend myself down in order to grab the hook. If the boat had swung towards the wall or if I had lost my grip Diane would have needed to pull that red rope.

With all the locks that day, sometimes we were able to cruise for ten minutes or so before we came to the next one. Other times we no sooner went through a lock only to see another one just a few hundred yards ahead. My feeling is that as soon as a couple doesn't need to say anything to get through a set of locks working as a team, you've finally gotten them figured out. I can say Diane and I arrived at that level on our return trip, after navigating through 24 locks.

Thursday night we moored in Chagney (pronounced Cha-knee) and took a walk into town. It was a sizable town with its center square, cross streets full of stores and restaurants and side streets with sandstone faced row homes. Though it was next to the wine country it was not made of wall to wall wineries as we will see in our next stop over. Once again we searched for the local Tourist Bureau for some visitor hints and their WiFi.

Where we stayed we had our water and power. Eight euros for the hookups for that evening. Because we were at a barge depot for a competing service, we had to leave the next morning to make room for their incoming vessels. It turned out to be a positive, for Friday morning we headed just 5 kilometers further up the canal to Santenay, located dead center in the Burgundy wine country. Here we tied up at a casual mooring with no services, but that was fine with us because we had topped off our water and had a fully charged battery to work with from the previous night's stay. Friday turned out to be our finest day of exploring.

Posted by Dave at the Vineyard at 3:52 AM