The Tale Continues - Up the Saone

Diane and I both woke up cold. No real surprise there, after all it is Fall in France just as it is here. Fall in the Burgundy region brings a lot of rain, and before this trip is over we will be able to testify that this is true. But this morning we were cold because our boat's heater had to be turned off before we went to bed. The Manual said we could run the heater while the engine was running, and then up to three hours after we shut the engine down. Neither of us was going to awaken after three hours to turn it off, not with our cold turkey method of handling the time zone change.

The good news was that here in Cuisery we had full mooring privileges, with a water hook-up and a 220v line to the boat. That meant our water heater was fully charged so we could take showers. And when you consider that I still had the same clothes to wear as when I started this trip maybe 60 hours ago, a shower was a welcome gift.

Once we had our coffee, always the first thing we did when we woke up, we took a short stroll around the town marina. We didn't go far, since we had a big day in front of us. To be honest, we didn't know what to expect. We knew that we would be going through some locks, two of which were manual (i.e we had to run them). We knew that we would be entering the Saone River.....how big was it? How fast was the current? How much traffic would there be? Would we be able to find our destination? Can we even understand the signs on the riverbanks or floating in the waters that are to direct us along the way? All very serious questions for a new Captain, and Diane for some reason had full faith in our ability to get through it (or at least she never let on any doubts).

At about 8:30 we decided to cast off. Next stop was La Truchere, a small village just a little further . down the small tributary we were on. However we had to manipulate two manual locks along the way using the matter of fact instructions we were given. Locks are about logic....once you get the basic drift of how they work it is then a matter of using common sense as you turn the wheels, ratchet up by-pass doors, and making sure you let water in (if you're going upstream) or let water out (if you're going downstream).  The shear weight of water is going to prevent you from doing anything too stupid, so as long as the mechanics seem to be operating effortlessly, you're probably doing the right things in the right order. 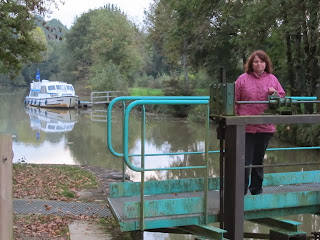 We managed to get past both of these obstacles, and feeling pretty proud of our ability to read hazard signs (like, "Don't Go That Way" or you'll go over the falls) and operate the locks we were now at "Level 2" on the "I'm Hot Stuff" scale. It was now time to start teaching my First Mate how to operate the craft, so I handed over the steering wheel to Diane. After all, how much trouble can you get in going only in one direction on a canal at 4 or 5 knots? ANSWER: Enough to loose a rating on the scale.

You see, Diane didn't have years of canoeing experience to know that river banks that gradually enter the water means that the water is fairly shallow towards these. Diane , I think, was driving the boat like a race car, cutting corners sharply to take the most direct route. So only minutes after she took the controls, we had driven ourselves into the shallow bottom and came to a complete halt. Bummer.
Again grasping the fact that you would be unable to bull forward unless you were an icebreaker, I pulled the throttle into reverse and begged Mother Nature to please let us get out of this without too much trouble. At first there was just a lot of noise and no action. The stream's current seemed to be equitable to the reverse force of the propeller. But with a little more power, and a little more praying, the boat backed up and got us out of this mess. I don't know if Diane thought I was a genius or just lucky. I never asked. She never offered.

We proceeded down the river without incident and made it to La Truchere, tieing up at the public boat dock. The town was very quaint. Buildings that had been there for hundreds of years. An insignificant number of public buildings......2 restaurants and a church, that was all. Maybe another twenty or so homes.  We took our "mandatory walk" which was really quite relaxing, and we walked our way back to the only restaurant that was open. During this time LeBoat at Branges called and said they had been delivered my bag that had been lost. KLM had FedEx'd it to them. They said they would meet us in about an hour where we were at. This timed very well with our lunch plans, so we made a deal.

I don't know if it is particular about France, or maybe it's due to being off season, but when we were sat at a table in the restaurant we had very, very limited choices, and these were "heavy meal" oriented. Forget a simple soup and sandwich. You must decide that this will be your big meal of the day, at noontime. OK, I can get used to this.....just plan on a nap after lunchtime. We stared at the simple menu and , like before there were no familiar English subscripts, no words with any common link. But there was one: BOEUF !! Of course we know what this is: BEEF.

Sure was. We ordered it thinking we would get a hamburger. Instead we got a tasty New York strip, with steak frites. Add to this a soup and an amazing dessert and it was one heck of a meal. I suppose it could have been snails, fried brains, or boiled bugs, but it wasn't. We were pleasantly surprised.

My bag showed up as scheduled, and with that we pushed off to go through one more lock before we entered the Saone River. It began to rain, which gave us a bit of discomfort. Trying to drive a boat from inside, with a wiper attempting to clear the windshield of downward splatter, is nothing short of steering half blind. The two of us stayed up on top as we made our way through the final lock of the day. This one was manned by a Lock Keeper, so our responsibility was just keeping the boat still as the water dropped. The procedure went smoothly, and we were shortly on our way with only minutes to our entering the Saone.

The rain was coming down hard now. Our better senses said to move down below and try to see out the windshield. The river was wide enough such that we thought we could give oncoming traffic plenty of space. And so we went northward in the pouring rain, trying to read all the river signs, our river guide, buoys, and landmarks as we went kilometer after kilometer. Fortunately as we approached our next destination the rain began to subside and Tournus (pronounced Tour-no) became clearer in the distance. The town dock was a nice size, but we weren't alone in using it on this day. We found a spot on the inside of the aluminum docks, closer to the man made riverbank. We had to back in, and this is when we recognized that in a boat this size, unless you have a split rudder, there is virtually no directional control going in reverse. So after three or four false starts trying to get dockside, we finally were able to jockey into position and tie up and have full connections for water and power.

The one thing you can't worry about is if you're being watched. Sure you are ! You are THE SHOW for the locals, The good thing to recognize is that any boatsman can remember when they too went through these embarassing moments, and silently they are rooting you on.

We were both soaked at this time, so we found it to be the opportune time to take a hot shower and put on a fresh change of clothes. It was about time, at least for me.  Afterwards we took a walk around the town, a really good sized town, and did a bit of food shopping while we were out. When we returned, we sat around the dining table, sipping good wine and snacking on some fresh bread loaf and cheese. After all, we had our big meal at lunchtime. We then crawled under the quilts and called it a day.

Posted by Dave at the Vineyard at 4:19 AM