The Tale Comes To An End

It is now Sunday. Our boat needs to be back by 9 a.m. on Monday morning, so with no nearby places to moor, for all practical purposes we need to be at their docks the night before. We have nearly 40 kilometers to cover today, so it'll be another day of just pounding the pavement, so to speak.

Once again we started our engines at 8:30 in the morning, and headed north on another gray and dreary day. Our RPM's were around 1500, which by taking time checks as we went by KM markers came to about 9 km/hour. It's possible to get to our destination at around 2 if all goes well.

The countryside was nearly the same as what we had seen before. Parks bordering the river with the occasional camper tented with a view of the water. Fishermen....those that were taking it seriously and those that used the activity to just get out of the house. Pastures and cows, more pastures and more cows. We made bets on when we would see the first vessel on the river, discounting dingies, and we were both wrong. It was 10:30 before a recreational boat was passed going in the opposite direction.

It seemed like every 10 kilometers or so there was a good sized city we passed through. From our vantage point they were indistinguishable. But then again we were still frazzled from yesterday's multi-lock day and the distance we covered. At one point we saw a 2-headed cow.....ask Diane about it.....apparently our coffee hadn't kicked in yet.

It began to rain again. What else is new. We did a little steering from inside  but soon came back on top......visibility wasn't that good down below and we had two large locks to go through. I just like to be able to see the goings on in these locks so getting wet was the trade off. Locks on the river are massive, for they have to be large enough to handle the commercial barges and the tankers that go up and back. Being a little tiny boat in one of these locks, and watching all the water change places on our behalf is mind blowing. These locks were manned, so we just had to get inside and hold on for dear life as hundreds of thousands of gallons of water brought us up to a new level.

On the trip we ended up going through a 10 kilometer man-made canal that skirted the city of Lechatulet. It was straight as an arrow; we could have put the boat on auto pilot if it had one. Boring too. It reminded us of the by-passes that we see on expressways that are the alternates to the business route. We didn't much mind at this time since it got us to our destination faster.

We finally got to St. Jean de Losne about when we planned. It was a huge boat marina, and LeBoat had a corner to themselves, seeing that it was a major mooring port for their operation. They easily had over a hundred boats there, and I would say 2/3 of them were bigger and larger than ours. Obviously boating in France is big business. We backed into an empty berth, tying stern in to the dock. Fortunately I had a week of experience to help me control the boat in reverse.......I've learned a lot in a week.

Diane and I put our things in place and decided to go for a walk and see what this town had to offer. It would have been nice to stop by a grocery and pick up just a few things to cap off our final dinner meal on the boat; there was absolutely nothing open in St.Jean de Losne. Pretty town, but empty shy of some young local men standing on a street corner shooting the breeze. We walked over to the beginning of the Canal de Bourgogne that went to Dijon and well beyond. For those that want to do the canal scene there are plenty of offerings. 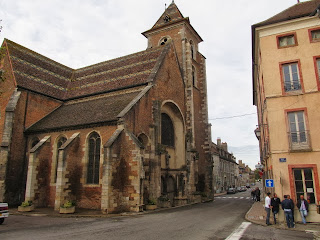 Our our return to our boat we found that two other boats had backed in adjacent to us. There was a young couple from Israel that spoke fluent English. The wife was going to the U.S. in a week to participate in an international math challenge taking place in Cambridge. It's a small world. Another couple had been given a boat to use for a week from some friends that decided to cut their trip short for some odd reason. They had a place in Dijon and a unique background, the two of them originating from England with the Mr. having a professor's post in a French university. They invited us over to their boat for an evening of drinks and an opportunity to share stories and pick each other's brains. It was a fun time and a great way to unwind from a long day.

Our next day was rapid fire too, as we got our boat checked in, jumped in a taxi to get up to Dijon (about a 45 minute drive) where we grabbed a train that would take us back to Geneva. Diane made plans for us to stay the night there, with our plane taking off Tuesday mid-day. When we arrived in Geneva the hotel was supposed to be within easy walking distance from the train terminal. It was easy if you weren't dragging suitcases and didn't take the wrong turn. It was mid-afternoon when we got there and had "the pleasure" of seeing the red light district in full swing readying for the night's entertainment. The ladies walked a five block area that was just down the block from our hotel. That evening we went out to dinner, one of the few times we really went out to eat, since most of our meals were on the boat. We went to a restaurant with a Swiss theme (duh), with its leprechaun dressed waiters, the bull horn and accordion for musical affects, and its regional wines, none of which topped those we had on our trip.

We returned to our room and ate the chocolates that had been put on our pillows. Our trip was officially over, except for an entire day of using trains, planes, buses, and cars to finally get us back to Massachusetts. The day after I jumped in my truck and drove another 12 hours to Virginia.

It was a great 40th wedding anniversary, even with the rain.
Posted by Dave at the Vineyard at 2:41 AM