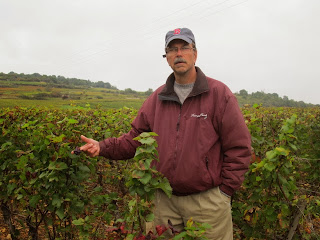 Diane and I had the opportunity to travel to France this Fall, arriving on the scene just as harvest was being completed on October 19th.  We spent most of our time in Santenay, the last major village in the southern part of Cote d'Or.

The village, like many others in the Burgundy area, had a traditional square in the center of town with its fountain and sidewalk seating for people to relax in and just get intoxicated by the views. Mountains in the background surrounded the village that dated back centuries.  Around the square were old stone buildings, many being owned by the larger Domains in the area. Unlike the States where you need to go winery hopping in your car, here these Domains had their own tasting rooms where you could easily visit 4 or 5 all within a hundred yards of each other. There were many many more  outside of town and a quick bicycle ride would get you to those.

The wineries in Burgundy take great pride in their not being like Bordeaux, their neighbor to the west. Bordeaux has succumbed to the global market, changing the labels on the bottles to meet international demands, but Burgundy has held back and kept the Village Name as being the dominant identification on the label with no mention of the grape variety.

We were invited to a private tasting in one of the town's wineries. The winemaker led us down to the cellar on steps and doorways intended for much shorter people. The cellar was really 2 floors underground, lined with bottles covered by dust that was years' old. He gave us each a glass that resembled a brandy sniffer, and poured a small amount of white wine for us to do our swirling and tasting. We asked what it was and he replied Santenay. He poured us another sample, and once again he said it was Santenay, but it tasted different. For a third time we went through the process, and for a third time we were told it was a Santenay.  This is when we were awakened by what was happening in regards to the identification. You see, in Burgundy there are predominantly only 2 types of grapes grown.....Chardonnay and Pinot Noir. So all of the white wine we had just tasted was Chardonnay, and we "should have known this". But the wines were from different parts of the vineyard, and different years. He repeated the process for the red wine, which of course was all Pinot Noir. And of course, we left with a bottle of his delicious wine.

Whenever we visited a village, we made it a point to check out the visitor's bureau. These seemed to be the only places that had WiFi so we could catch up on the doings back home....the Government shutdown was of particular interest because they were holding up our Winery License, the Red Sox were in the playoffs, and I was expecting my cows to start having calves. Also, regardless of what you've heard, once you get in these back villages there were very few people who could speak English, so finding someone who could explain the layout of the land was welcoming.

There is a lot more about the trip that I'll cover in another blog, because on this trip we celebrated our 40th anniversary in a boat while cruising the canals north of Lyon and south of Dijon.

Posted by Dave at the Vineyard at 5:02 AM