The Tale: Where New World Meets Old World In Santenay

I started these blog entries about our trip in Santenay, another one of those cute villages buried in the middle of the Burgundy region. It was nothing short of bucolic. One main road passed through the middle of town which was labeled The Grand Crus Route, and at the center another road intersected from the mountains a bit to the northwest. Vineyards crept right up to the buildings on three sides, each being owned by a different prominent wine family that could be traced back for generations.

The private wine tasting that Diane and I shared was with a family that owned a compound right adjacent to the square. Surrounded on all sides by a fieldstone wall, it housed their private home, the wine making building which could be described as a very large barn (for grapes, not livestock), their own fountain and flower garden, and of course their wine cellars and operations building. We were first introduced to the oldest of four generations living on site; an elderly man with a bend in his frame no doubt the result of many years of working in the fields of grapevines. He was 4'10" at best, but still a short man if, "when straightened", he might have come to 5'2". As soon as we started talking he knew that there was a language barrier ( a common theme of these blogs) so he excused himself to retrieve his son, who could at least pretend he knew some English. If you refer to the travel brochures describing these wineries, they have little flags next to each write-up that represent the languages spoken on the premises. The Union Jack was next to  Domaine Louis Nie, which must have been a strategic marketing decision as opposed to one matching actuality.

As mentioned, this was our introduction to truly knowing the region and their specialization in two types of grapes: Pinot Noir and Chardonnay. What many do not know is that most Champagne is made from these two major grapes along with Pinot Meunier (the Champagne region is immediately north of Burgundy). Other famous districts within Burgundy specialize in Chablis, located in the northern part of Burgundy with its namesake wine which is also made from the Chardonnay grape, and Beaujolais, located on its southern border that uses the Gamay grape.

Most of us in America, when we go to a wine tasting, get to taste maybe a couple of whites, then a few reds, and possibly finish with a dessert wine.  All of these wines are from different grapes. What one should experience is having a tasting of wines all made from the same grape, but from different plots of land that can all be within a mile of each other. It is an eye-opening experience to be able to actually tell the differences and be able to describe the variances that one can get from the different terriors. Terrior is defined as the unique combination of soils and weather that influence the flavor of the wine. Diane and I had this tasting with an old world winemaker within the dim lighted confines of a centuries old wine cellar. 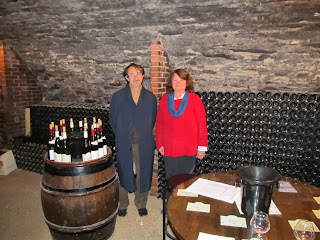 After our session we returned to the outdoors and walked not even a tenth of a mile before we were in one of the vineyards on the outside of town.  This is where I became my usual nosey self, being very involved in our vineyards down here in Virginia. These vineyards were not fenced off, though some of those being adjacent to buildings had a waist high stone wall around them, no doubt being built when the original winery was established in the 17 or 1800's. The vines were all cropped low, maybe being 40" tall at best. In the States the common height of our trellis systems are about 6' tall. On further research I found that their system had also been around for hundreds of years, and there was no inclination to increase the height, some say due to habit and maintaining the old ways, others say it is to keep the grapes closer to the warm earth to lessen frost damage and increase the growing year by a few weeks. When they harvest their grapes, we were told pickers crawled on their hands and knees from one vine to the next; Americans have a limited capacity to bend over when working, let alone get down on their knees. That could be why our trellis systems are as tall as they are, keeping the fruiting region around waist high.

Peeking inside of their winery building, we saw stainless steel tanks amongst the many barrels, and state of the art pressing equipment where the 3rd generation son was shoveling out all the grape skins from a recent press. Though the winemaker may believe that art is still a major influence in making the wine, there is no doubt that some science, and some new techniques, are making their way into the process.

We ended our day going to one of the local restaurants. As before the meal in the middle of the day was designed to be the larger one. The Meal du Jour was a poached fish.....good thing we both liked it because there were no other choices. We made the cardinal mistake however of ordering Coke with our meal. Six Euros later (per 16 oz. Coke) we realized wine would have been much cheaper instead of paying the equivalent of $8 a bottle for soda. Dumb Americans.  The food was good, so from there  Diane and I walked around,  going to a more retail like tasting at one of the Domains right on the square. From here we meandered our way back to our boat, recognizing that we only had two more days of vacation, and a lot of distance to cover, to get to our final port up in St.Jean de Losne.

Posted by Dave at the Vineyard at 3:41 AM