On the previous day I left off telling our tale back in Tournus. Tournus is an idyllic town, one you wouldn't mind staying a few days in. Sitting on the shores of the Saone, its western side gradually rises up a slope with the Abbey of Saint Philibert at its pinnacle. With its fortress like facade, it can be seen from almost any part of the city. Diane and I walked around again, now venturing into sunlit streets that were only shadows the evening before. As in many of our future quests, we were in search of the Tourist Bureau, primarily to use their WiFi. which was located just across the street from the Abbey. 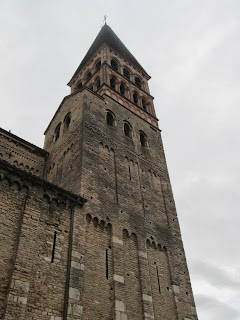 These small centers, set up to promote the attractions in the immediate area, were generally operated by young outgoing types who were multilingual.  Unfortunately on this day those "manning the booth" didn't have English as one of the choices. But they did know WiFi and pointed us to the website, which Diane and I accessed as we sat on a wet outside bench trying to find out about the Red Sox, the Government shutdown, and the status of my 4 pregnant cows that I had left back home. I think Diane had other priorities, but these were mine.

From here we wandered throughout the city amongst its snaking array of streets. Small boutique stores were on the commercial strip, and looking at the men's clothes they were promoting I am glad that KLM found my bag of apparel ! There were plenty of restaurants that I wish we had time to visit, and many other historic sites hidden in back streets. We did however have a schedule to meet, and that meant going further north on the Saone before we took a sharp left to enter the Canal du Centre, our pathway to the middle of Burgundy.

It was much easier to exit our berth than it was to enter it; going forward is always so much easier especially since we had parked the boat with our bow facing up river. And so for several hours we sped on at 8 or 9 knots looking at the countryside as only this part of France had to offer. The pastures of the farmlands came right down to the river, with flat fields of late season corn or cream colored Charolais cattle coming down to water to drink (I have this thing for cows). The grasses were  plenty green and the leaves were still on the trees, though the air was crisp and a partly cloudy day hung overhead. Diane and I were on the top deck catching as many warm rays as we could; our wet clothes and towels draped over the deck chairs in hopes the sun, and the breeze, would somehow dry them. They never really did get dry during the entire trip.

Chalon-Sur-Saone was the big city on the Saone which was turning point to enter the canal. It was the first town that we had seen that was industrial, with its stacks emitting hot gases and piles of raw materials adjacent to the river, having either a place for their being shipped or being dropped off for processing. By now we had figured out the river signage system, and were getting good at identifying the various buoys that lined the deeper water passageways. Caution was always the key here, so as we entered the mouth of the canal we approached slowly just making sure we weren't entering some restricted zone. Our speed dropped to 3 knots or so as we went past even more factories, discarded steel skeletons of barges from ancient past, and remnants of old dock systems. We "sort of knew" we were in the right spot when way ahead we could see a huge set of iron doors, our entrance to the first lock on the canal. They were gargantuan......ten times larger than anything we had seen before. This was our second set of manned locks but it had few of the features of the locks that we had seen before. Here we were, crawling forward wondering if anyone, or anything, would identify our presence and open the gates that would allow us to start climbing the mountain in front of us.

Our questions were answered when we saw water burst from the base of the gates. This is one sign that we are going uphill from the perspective of a canal. The lock was letting the water out that had been at the height of the canal beyond. Once the inside level came down to our height, the gates would slowly opening inviting us into the "dungeon". If you were claustrophobic in any way, this was not the place for you.Once inside the gates closed in behind us, and we were a good thirty feet below the upper edge of the lock. The inside was dank, the walls slimey. Easily 50% of the sun was shut out due to how far down we were from the outside world. Our boat was so tiny by comparison that we could only hope that it wouldn't be jostled around when the waters were allowed to enter in order to raise us up to the next level.

Once again our fears were unwarranted. The boat gradually rose and the incoming waters had only a minimal current.To see the sun again was one of those "Hello" moments as we readied ourselves to exit and continue our trip. Before we were on our way we were greeted  (now there is a stretch) by the Lock Keeper, who had an obligation to find out where we came from and where we were going. I think it was something the officials felt they should have him do to keep busy, since his day probably consisted on pushing a couple of buttons several times a day. He hadn't brushed up on his English in his spare time, and we hadn't improved on our French skills, so when he asked the question we immediately became brain dead on answering any questions without our map to refer to. We stumbled through it and I suspect he put down any old thing in order to fill out the blank on the form he had attached to his clipboard.

We exited the lock and slowly moved on. The canal was straight as a bullet, with green grass lining the banks a couple of feet up on either side of us. On one side there was a bike path for the occasional runner or biker. The trees that enveloped the canals were tall but let in a filtered light as we silently motored on. At one spot there was a restaurant that went over the top of the canal; interesting but far short of our destination for that day, a small village named Franges. We had been on the water for nearly fours hours by now, and we wanted to get tied up and be able to think about dinner. We had a dozen locks to go through, most of them tomorrow, so to get tied up while there was plenty of light and some dry weather would be a nice change.

We came upon Franges with little fan fare. There were plenty of other boats and barges tied up along the northern shoreline and all the prime spots were taken. We can't imagine how there could be any places to tie up if one were doing this in the middle of the tourist season; there was only one more week after our stay in France when they would rent these pleasure boats. Diane took her place on the bow as I tried to maneuver the nose toward shore somewhere near a stanchion so we could tie up. We got close and Diane jumped, rope in hand, only to find the ground beneath her was sloped and slippery. It was not a great moment, as she fell sideways with her legs collapsing beneath her. There wasn't much I could do for her; I was at the helm keeping the boat nose in to the shore. She did get up, both shaken and sore by the experience. Her legs never felt the same throughout the trip though she was a trooper in that regard as we tried to see as much as we could during each of these stops on the trip. She hobbled as best she could, and with movement the warmth of her muscles helped, but she never fully recovered until she got home. It also meant a crew change, as she became better at the controls while I worked the bow and the ropes.

Franges was another one of these little towns along the way that felt a great pride being on the canal and having tourism as a means of welcoming the outside world. It was after the tourism season here though, and the Tourism Center was closed. Franges did provide a new custom for us as Diane went into the Patisserie to get some croissants and French bread for our dinner and our next day's breakfast. The French really know how to do their pastries.

Franges was also the point when we realized that the heater in the boat no longer worked. It did so well the days before, and now it had completely crapped out. We pondered whether we should call LeBoat and describe to them our problem, and we decided that LeBoat no doubt would send out a technician to fix it, albeit it would most likely kill a day in our travel plans waiting for him to show up. As they say in legal jargon, "Time is of the essence", so we decided to hunker under the quilts at night in order to get some time up in vineyard country where we would be on Thursday.