And now I have five (cattle that is)

I was driving south from Massachusetts having just gotten back from France the day before and my phone started to ring. I was in New Jersey.

Though I live in a mild state of paranoia, believing there is a State Trooper watching me just to see if I pick up my hand held cell phone, I decided to answer it anyway. It was Anna. She and her daughter Katrin were kind enough to keep my cat alive while I was gone for over a week. They also had the task of counting my cows periodically to see if any had given birth. Three of the four were expecting when I took off to Europe, and while Diane and I were there Anna had emailed us and said X446 had a calf on the last day of our voyage.

But Anna wasn't calling to tell us another calf was born. She cautiously gave me the news that she couldn't find the calf that day. The two of them had walked back and forth across the nine acres, and the cows weren't too helpful in helping her locate the newborn. Even X446 seemed noncommittal. Other than tell her I'd look around when I got down there, and I was on my way, I didn't know what else to say. The next six hours of my drive my brain was racing from "there's nothing I can do until I get there" to thinking a hunter had a nice piece of veal in his cooler, to wondering if a coyote had made off with the carcass. I kept driving. My arrival was well after dark so the search had to resume the next morning.

I didn't get much sleep though I was exhausted from the traveling I had done over the past two days. There wasn't any real food in the house, so once I defrosted an English muffin and smothered it with peanut butter, I woofed it down, poured my coffee, and went out to the Back 9 to start my search. Believe it or not, trying to find four huge red angus cows can be difficult at times. You just can't stand on a high spot and glance around, hoping they are standing against a contrasting backdrop easy to see. They do get down on the ground, or crouch under trees, making them hard to spot. And last night's resting ground may not be the same as the night's before, or the night before that.

So I started to walk first to the latest hangouts. They weren't there. My next approach was to walk the parameter, and by the time I went 3/4 of the way around, there they all were just staring at me wondering (A) it's about time you decided to show up, to (B) what's your problem? Like many a kid's movie where they have dogs and cats talking in perfect "human speak", I hear these cows with human intellect trying to communicate with me telepathically. Only cows have certainly a different perspective than I do as to what is important or annoying.

I walked up to X446 and asked where her baby was. A blank look came on her face. Mine too as a matter of fact. Getting answers wasn't going to be easy here. But the cows were in an odd part of the pasture. There were thousands of tall weeds called dog fennel surrounding them. Cows don't like to eat them and there isn't any real forage under or within them.  Generally not a good hang out spot, but it would provide refuge for a weak and tired calf, so I started walking around the immediate area and it wasn't long before I found the calf, curled up into a ball having rested the night. Mother came over and she and the calf reunited for their all too frequent milking that occurs until the calf learns to graze. Weaning won't happen for another five months. 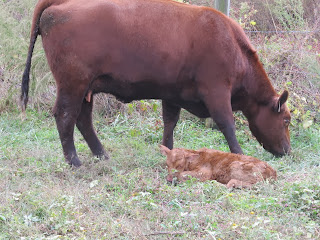 I called Anna and let her know the calf was found. She obviously was relieved not really knowing what more she could have done at the time. It was now time to be on calf alert for two more.....X406 and T29 were overdue.
Posted by Dave at the Vineyard at 11:20 AM