The Tale : Retracing Our Steps

If you look at a map and see the course we've taken, from the Saone up the Central Canal to our target destination of Santenay, you can sort of imagine us being at the top of a roller coaster and now we must retrace our steps, going back down the hill until we meet the Saone once again, where we must head north to reach our final point. We must cover as much distance in two days as we had in our previous four. Whereas we generally cruised only 4 or 5 hours a day, we now are planning on banging out some hard mileage in order to get to where we need to be on Sunday night.

Diane and I decided we needed to be already moving by 8:30 in the morning, and with that being the plan the engines were started right on time. We were however pointed in the wrong direction, so we needed to make a u-turn in the canal to be facing the right way. Not really a problem, I thought. We had made a couple of u-turns before when we were positioning to tie up at one of our daily stops. Not giving it much thought, I increased the throttle just a little to get some forward movement, and then I banged a hard left like I was making a 3-point turn.

The bow hit the side of the canal, almost like how I learned to parallel park when I drove back in New Jersey. I then put it in reverse to hit the stern. My "nudging" of the bank behind us was almost immediate, which meant I may have a major problem. Was the canal actually less wide than I was long ? The boat now was at a 90 degrees blocking the canal; I was in deep do-do. What happened next must have been a sign from God, for as the bow was being pushed against the bank before us, the stern now was squaring off with the bank behind us. The downstream current continued to push our nose in the left direction, and once again I was saved from embarrassment and an international incident. We were on our way.

We were fairly comfortable with the boat by now, and were no longer timid about raising the RPM's and our speed. An hour later we passed Chagny and saw other boats parked where we had been just two nights before. Now we had all those locks ahead of us that we had conquered earlier on our trip, but instead of splitting them over two days we were planning on doing them all in one day.

Our voyage now took us down the mountain, and there would be other hard learned rules that took us way too long to grasp. We were fairly lucky that for every one of the locks they were already at our height level for the gates to open. We didn't have to wait for the locks to rebalance their levels as we had on the uphill trip. All we had to do was enter, close the gates using the ropes as before, watch the water level drop, open the gates, and we were off again. What we didn't realize was that, as we held our bow against the side of the locks, we had a rubber bumper attached to the side of the boat that grabbed the side wall of the locks as the water dropped. We found our bow stuck on the side of the canal and our stern rapidly falling! We were like a dolphin jumping out of the water; the boat tilted until the weight of the boat just got to be too much for the bumper to retain us on edge, and then the boat fell loose once again into the lowering waters of the lock. The first time it occurred it scared the living crap out of both of us......when we saw what was happening we tried to push away but the bumper was stuck in position. Hold on tight, it'll be one heck of a ride. Need less to say, we became aware of this predicament and made sure we weren't hugging the sidewall for the other locks we went through. Whew.

After three hours or so we had arrived at Franges, where we stopped for a short while to have some lunch. We had been alone up to now going down through the locks, and during this time we didn't pass any northerly traffic or partnered with anyone going the same way as us. The season was coming to an end when you do not pass any canal tourists on a Saturday. Our trip continued, where the only person we met was the same Lock Keeper with a clipboard at the final lock on the Central Canal. He asked the same questions, and now we gave him our "We came from Santenay and we're going to Gergy" answer, which apparently from his frown didn't satisfy his requirements but he sent us on our way anyway.

We popped out of the mouth of the canal, cranking at a very respectable 9 knots, nose pointed northward on our race up the Saone. The weather was beginning to change with the occasional drizzle to make our driving a little less than pleasant. Many of our clothes still hadn't dried completely, so this was only another reassurance that being dry and warm would remain out of reach. Our desire to get to our next stop was now becoming competitive. Not knowing the services or the number of mooring spots our next port would provide, we made a special effort to pass anyone we saw on the same northerly path so we could get a place to tie up for the evening.

Gergy was one of those nondescript French villages. They had a cute park adjacent to the river, but the hotel was closed down and the restaurant near the mooring was also shuttered. There was a definite "downtown" flavor, and there were homes bordering the two main roads that had the traditional stone walls around each one. Stone houses with metal or tiled roofs was the common practice in France, and in Gergy it was the same. Martha Stewart's color selection for house paints would be narrowed down to beige trim paint and possibly a few other earth tones.. 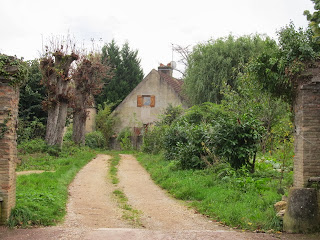 Diane and I walked the town, and it met our minimal requirement of having a Patisserie, which was surprisingly still open at 4 in the afternoon. Some bread and another batch of croissants had become our favored purchase.

When we returned to the docks we were able to help a barge as it slide in behind us. Ropes were tossed and I helped tie up the nose of the barge as its "First Mate" took care of the stern.  It was a barge that had been converted into a houseboat that we had sped by an hour earlier. The Captain and wife were from the U.K. and were spending the summer doing the canals in Belgium along with many others in their own personal water craft, which they had shipped across the English channel so they could start their journey.

By now we were beginning to scrape our food stores down to the final crumbs. It wasn't by accident that we actually had some good well rounded meals planned in order to have nearly nothing left with one more day to go. We cracked open our last bottle of wine, had some cheeses and some meat spread, and prepared dinner as we had many times before. The trip was coming to an end; tomorrow would be another day of full bore motoring up the Saone to St.Jean de Losne.

Posted by Dave at the Vineyard at 5:14 AM