When I finished the previous blog, I had been told the night before that T29 had escaped. She was a week overdue on her calf, and this no doubt was a sign of her anticipation and frustration. The fence she left behind was a mess. Four barbed wires all ripped to shreds and tangled; no doubt the result of her jumping over and/or bulling her way through. The other cows and calves were on the opposite side of the field, so I opted to take a walk along the tree line and see if I could spot her. The adjacent field is owned by another farmer, and he had soybeans still to be harvested. They were maybe 30" tall and a dull brown in color, so you would thing that just by looking over the top of 100 acres of beans I could spot a huge animal.  I spent a good hour walking around, visiting the spots I would go if I was a cow.I had no success.

I returned to my pasture having collected my hammer, fence staples, and spare wire, and proceeded to fix the fence. It was now "solid", or so I thought.

For the next three days I wondered around the back fields looking for T29. I called the Sheriff's office thinking that if someone woke up and found a cow eating their flowers that they would know it was mine....not that I would know how to collect it if that happened. I also went down to the local tractor equipment store and let a member of the local hunt club know that I had a cow on the loose, possibly two, so he should notify his hunters to be on the lookout. A hunter with a quick trigger might manage to knock off a calf.....their coloring and size isn't much different than a small deer.

It was on the fourth day that I went into town to run some errands, and I came back and thought I'd eat some lunch when I looked out and saw T29 eating my side lawn grass.  I slowly walked  over to her and started my ritualistic conversation. She apparently really didn't want to be bothered, so she started walking towards the pasture and back woods. I suppose I could have shooed her into the pasture, but if she had a calf how would I ever find it ? So I slowly walked beside her and for the most part she ignored me and kept walking. And kept walking some more. Nearly twenty minutes later and easily a mile away on the other side of the field she walked and eventually stopped in the middle of a small corner of the field.

I knew what she was doing....looking to see exactly where her newborn calf was and with her occasional mooing try to draw it out of the woods. Within minutes it peeked out, and then the two were united. I approached them and Mom decided to only let me get so close. She turned and started walking even further away from our pasture.

I wasn't going to allow this to happen. If she went deep in the woods I'd never be able to corral her and get her back. And with hunting season I didn't want to lose the two of them for another night. I started to jog next to them hoping I could cut them off and turn them around. The mother and calf started trotting in the away direction.

Being a marathon runner I decided I'd be damned it I was going to let a 3-day old calf out run me, so I went into a full sprint, barely enough speed to cut them off but after a minute I was finally able to get ahead of them to make them turn. Once turned however their trot slowed down to a brisk walk, and they beelined to the pasture, now a good 25 minutes away. As long as they were headed in the right direction I wasn't too concerned, though I knew the fence there wasn't open. But to race ahead to open it probably would have had them turn again. So I followed a few hundred yards behind them thinking they would be standing by the fence when I got there.

I eventually got my way to the back gate by the pasture, and the two of them were no where to be found. At this point I was tired and hadn't had lunch. Time for a break before I worried about them again. When I exited the house a half hour later there they were nibbling grass in my back yard. T29 saw me once again and decided to start going to the back woods again, calf in tow.

If I just followed them I would be right back to where I was hours before. What I did was jump the fence into the pasture, and follow them in parallel until we got to the back corner where there was another gate where I could hopefully be able to let them in, assuming that was their plan (I know it was mine). I had with me a bucket of corn and by now I had captured the attention of the other three cows and their two calves. They came running down to where the action, and the treats were. I needed to open the fence,and here now were another potential five escapees. I decided to feed the cows that had exhibited good behavior, open the gate and see what happens.

T29 worked her way down the fence line, her view being blocked by weeds and shrubs bordering the fence. Her face popped around the corner only to see the other cattle were having a major snack on the corn I had brought out. She was not going to be without, so she mozzied into the pasture aiming directly to the bucket of corn which had by now been totally emptied. I closed the gate right away having finally gotten all the cattle together after four days.

This left only U204 to have her baby, and on the day I wrote this blog entry, December 1st, I am proud to say that she gave birth to a fine calf which was two weeks late. My herd has increased from four to eight within the last 5 weeks. My cow affairs are behind me, though I have to castrate some, tag others, and think about AI'ing the adult cows in another month or two. Time to get back into the fields while the weather is still reasonable. Need to weed wack and prune twice, along with some trellis repairs, all before April 1st, 2014. 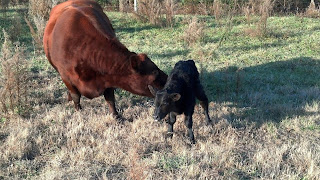 Posted by Dave at the Vineyard at 3:20 PM