Petit Verdot - Before & After

In time I think the Petit Verdot will be one of my favorite grapes.

We planted nearly 1000 of these grapes back in 2010, and you would think right about now they would be pushing out tons of gapes. The fact is, this has been a tough variety to get hold of. Literature about this grape supports our observations. It is late to harvest and difficult to grow. Most of France has given up on this grape, favoring the Malbec for its earlier ripening qualities where it is equally used as a mixing grape. Those few in France that have held on to growing this grape however (primarily in the Medoc region), swear by it for the contribution of alcohol, acidity, and substance that it adds to a blend.

One rarely sees Petit Verdot as a varietal that stands on its own, and if you see it on the shelves grab a bottle and taste its presence and personality and then you will be able to understand how it positively affects a Bordeaux blend.

Two years ago, about when these vines were in their second year, they got hammered by both insects and disease. By my past posts you can see how this is a never-ending trend down here in Virginia. But to be honest, because they were so early in their growth cycle they were also ignored to some extent in favor of the grapes in Block 1 that were further ahead. So last year I decided to pretty much leave them alone and allow them to recover on their own. For me to get in there and try to prune, or micro-manage their recovery seemed like a futile exercise, and besides it would only be a crap shoot as to whether I was cutting off the parts that were truly infected vs. those that weren't. So I let them grow.

Rich and I did get in there once (in Block 2A) and perform a little sucker pruning, but that's about it. We didn't force certain cordon structures to be made, we just let them grow. And grow they did. 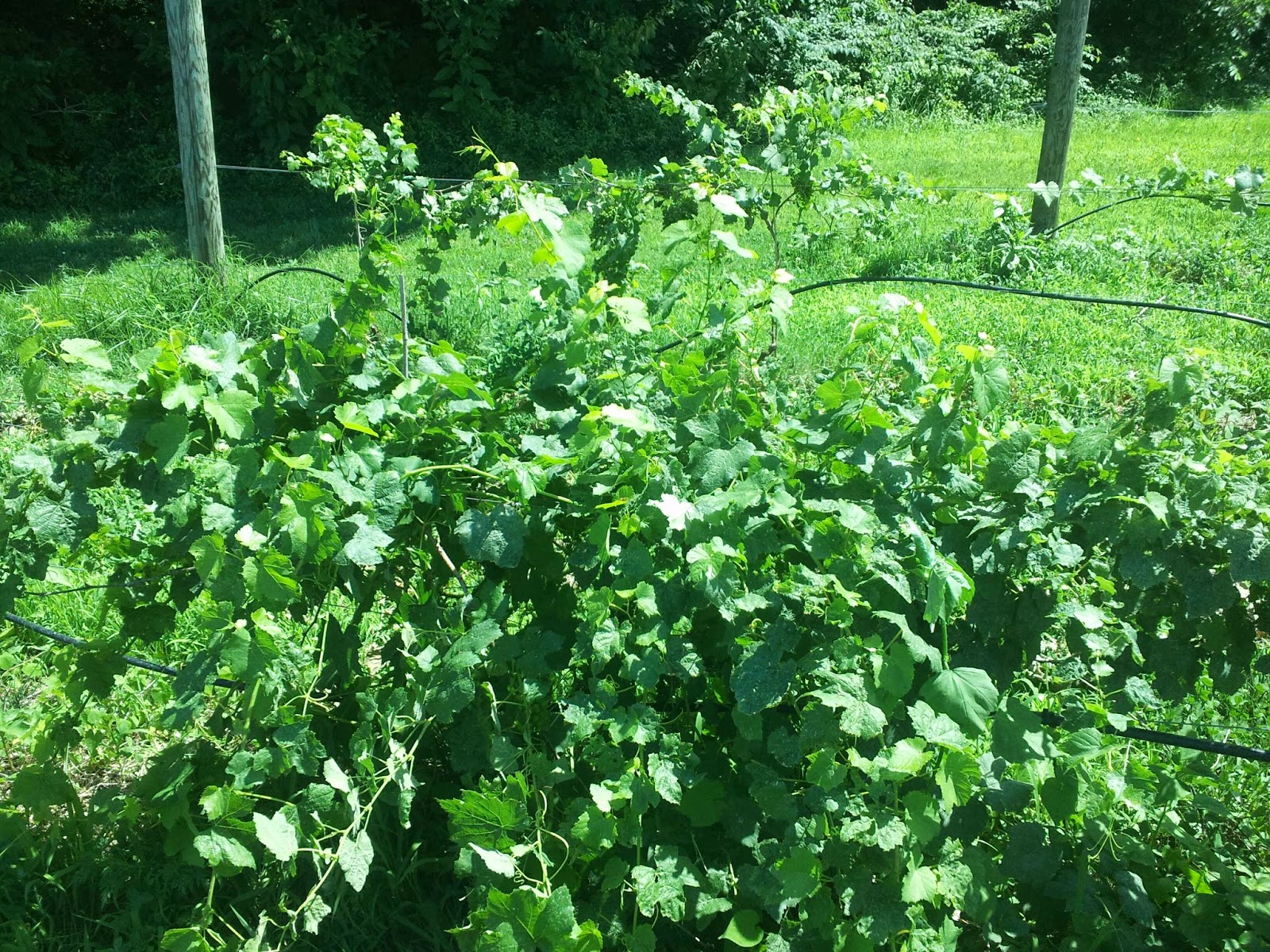 Now I recognize that here it is, almost July of 2014, and I am still pruning. But if all goes well I will have completed the Petit Verdots by the end of June.  What you see in the picture is an out of control vine, that until today was allowed to do whatever it wanted.

When I teach pruning I first start out by asking the new pruner to envision what they want in the way of a trained vine. This is important because it sets in their mind a picture of what they are striving for, and provides some direction as to where to start looking and where to start chopping. It is also important to understand that it is up to the pruner to train the vine and not let anything that the vine has done dictate the training decisions. To leave a lateral (a hyper-growing shoot) alone because it's doing so well is really counter-productive.

Which gets us back to this vine, which unfortunately gets us back to the fact that this vine was intentionally "let go" so it could recover from black rot. It raises the degree of difficulty up some from normal pruning, but many of the basic rules still follow.

To begin, I am generally in the field at about 6 a.m. It is downright pleasant then, maybe 73 degrees with some of the vineyard still shaded by the surrounding trees that are blocking the rising sun from peaking over and increasing the glare and the heat. By noon it is 86 degrees, but with such a high humidity and only a minor breeze, the "real feel" is more like 110 degrees. Need less to say I try to prune as much as I can by noontime.

You see a vine like this one and just say the words "Geez, where do I start?" But after pruning thousands upon thousands of vines, the procedure generally falls into the same pattern. Getting down on one's knees, allowing the morning dew to saturate your denims, you reach in and start pulling away the frontal foliage to see what is really happening behind all those leaves. In this case there were three well-developed trunks coming out of the grafted union at the base. All three had some firm bark on them, but they were different from each other in regards to (1) what direction they were coming out of the knuckle (this is what I call the enlarged area where the rootstock was grafted to the vinifera) and (2) the trunks are of varying size....some the thickness of a pencil while others the diameter of a nickel.

As you look at each of these trunks you follow them up to the second wire, the wire where the cordons are developed and eventually tied to. This is about 36" off the ground. Ideally you want to see a Y or a split in their upwards growth so you can immediately tie them off to begin their cordon development. If this split isn't natural, it can still be created but that means losing another year in the vine's development, pushing off significant grape cluster growth for another year.

Those are the top three conditions one is looking for to decide which of these trunks remain. First the natural Y (to make the cordons), and then it is a managerial decision as to whether the direction of the vine growth   (is it naturally straight up or taking a weird twisted turn out of the knuckle before it heads "northward") is more important than the current diameter of the trunk. Sometimes a bigger trunk starting out sideways but recovering to the upright direction is the better choice, other times a smaller trunk is chosen if it comes out of the grafted union in a  mostly vertical direction and hence having less stress on the joint where the new trunk exits the knuckle.

Makes sense, right ? Well it does after thousands of similar decisions. After about 5 to 6 minutes the vine has been completely pruned and the scraps lay in the row centers for the mower to shred on its next pass through. The final version is a completely different creature than how it began, now allowing the vine to properly develop and put its energy where it belongs, in making the grapes large and plump, and storing the necessary carbohydrates it requires to get through the next winter. No sense putting energy in growth that doesn't contribute to either of these two things. 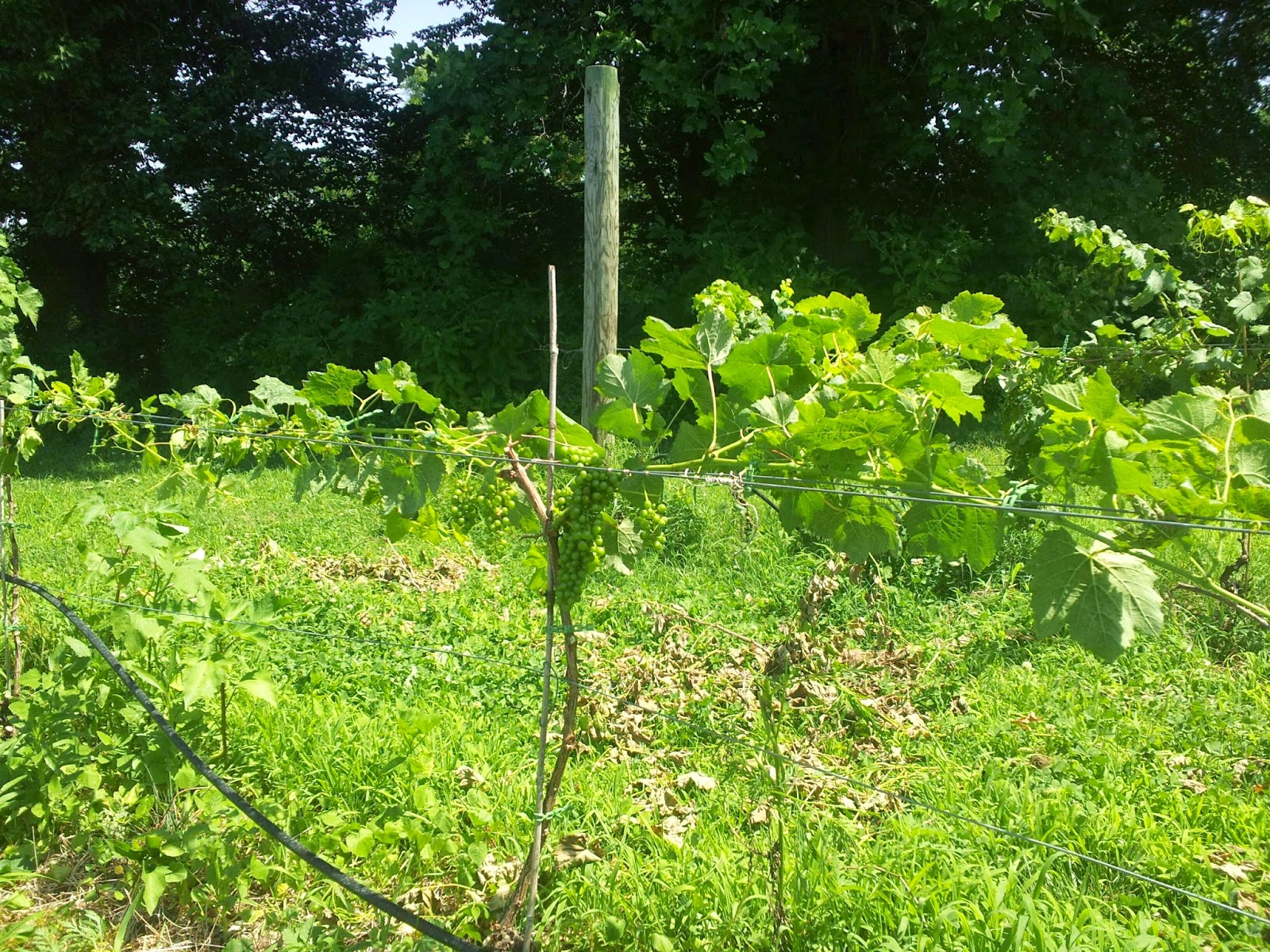 Posted by Dave at the Vineyard at 5:16 PM