There are good bugs and there are bad bugs. The sad part about it is that it is a lot easier to control the bad bugs than it is to manage the good bugs.

With bad bugs one just has to wait and observe when they arrive, and then slam them with some kind of insecticide. Of course there is the school of thought that you shouldn't apply a chemical until the damage by the bugs has reached the "economic thresh hold". I have been told that a vine can easily sustain a 15% loss of leaves without any significant detrimental affect.  Unfortunately, what this ignores is that much of the damage is caused by larvae or caterpillars and by the time you spot these in the vineyard it is already too late.  In a previous year one of our vineyard blocks was attacked by yellow fuzzies (Virginia Tiger Moth), and in a matter of just a couple of days all the leaves on 1400 vines were wiped out. This led to nearly every vine dying because there wasn't enough green matter left in the late summer to provide the carbohydrates needed to be stored in the trunks and canes to last through the upcoming winter.

So what we do here is a preemptive strike, putting insecticide on the vines about as soon in the season as we can coinciding with any visible signs of bugs. As I have discussed in the past, Japanese beetles tend to be our most hated bugs, arriving in the first week of June and causing grief for about two months. Though our earlier applications may be with an insecticide called Malathion, as soon as Japanese Beetles are seen we rapidly switch over to Sevin. The good news is that it also kills the Virginia Tiger Moth, so our two worst bug preditors are being challenged.

Earlier in the season an Agricultural Inspector came through the area and asked if she could put up several traps to see if certain insects had expanded their territory into the Tidewater area. These traps have a female mating peromone in them as an attractant, and once a mate enters the trap a sticky surface captures them. Of course I applauded any help I could get handling these creatures, so she placed 4 traps around Block 1. As of early June there haven't been any of her bug subjects caught; European Grapevine Moth and Light-Brown Apple Moth were the bugs being sought. 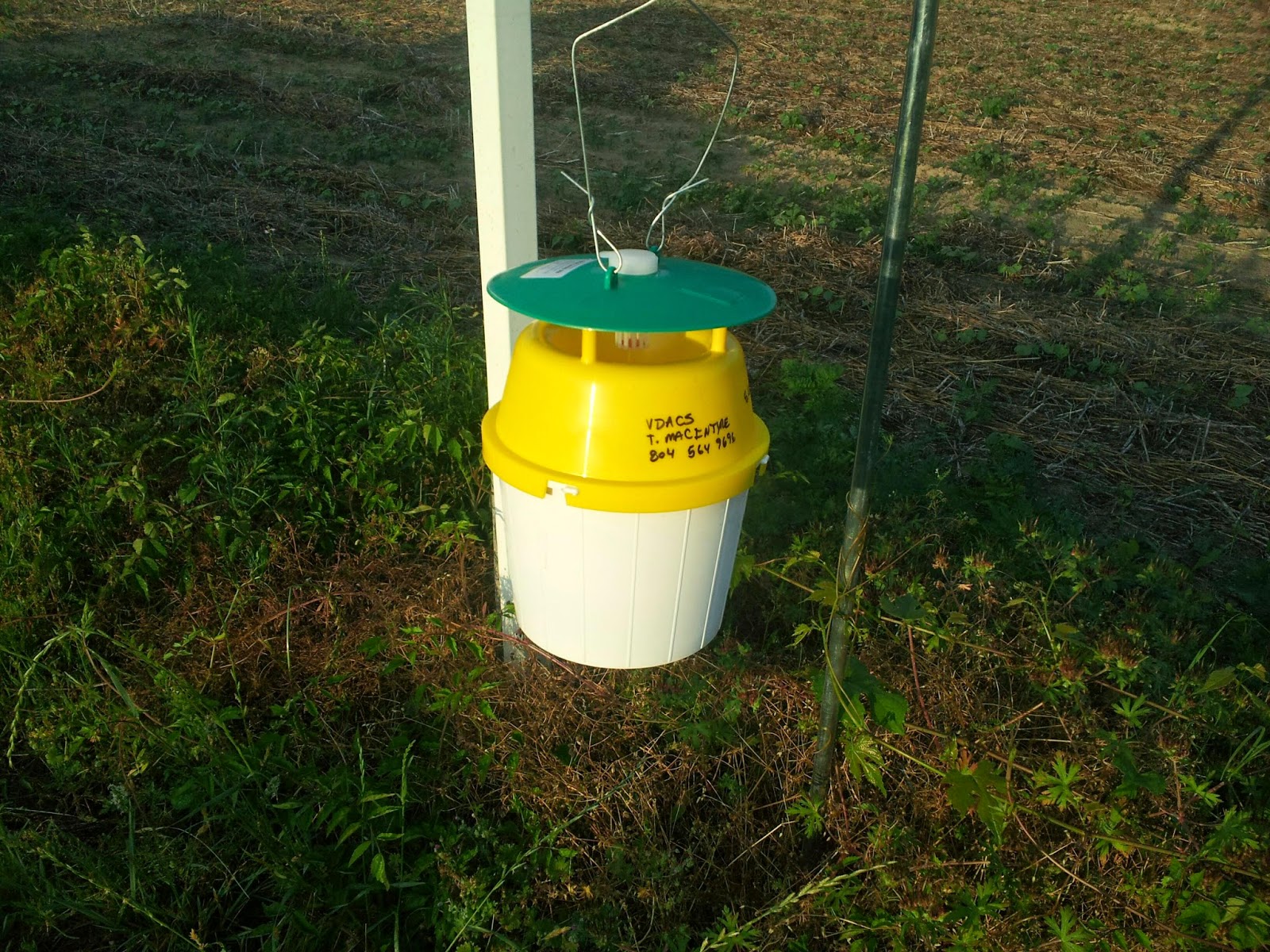 Good bugs on the other hand are a bit more difficult to deal with, because they arrive early  and tend to prance around the vineyard throughout the entire summer. They are affected by the same insecticides as the bad bugs; Malathion and Sevin are killers of good bugs too.

Our vineyards have three beehives located on the borders of our three main blocks. All are occupied by a New World breed of honeybee. In the Spring a hive may have as many as 10,000 bees in it, and this number will grow as the season warms up, possibly growing to as many as 30,000 to 50,000 bees. Depending on how well the hive prospers, the need for frames (those honey-comb panels that you often see a beekeeper handling) will increase. It is not uncommon for 1000 bees to be on a frame at a time; it takes 10,000 bees to generate a pound of honey and 30,000 bees to fully pollinate an acre.

So, what'll we do ? Since the vineyard  manager needs to deal with the bad bugs, but doesn't want to adversely affect the good bugs, the best thing to do is remove the nectar source within the vineyard. On the day before we want to spray we mow between the rows, clipping off the flowers of the weeds and ground cover so it doesn't attract the bees. Inner-row blankets of white clover turn green again. We then do our spraying very early in the morning or late in the day when the bees have returned to their hive. Once the spraying is completed and has dried on the vine leaves, the risk of exposure greatly reduces and should not affect the health of the hive. 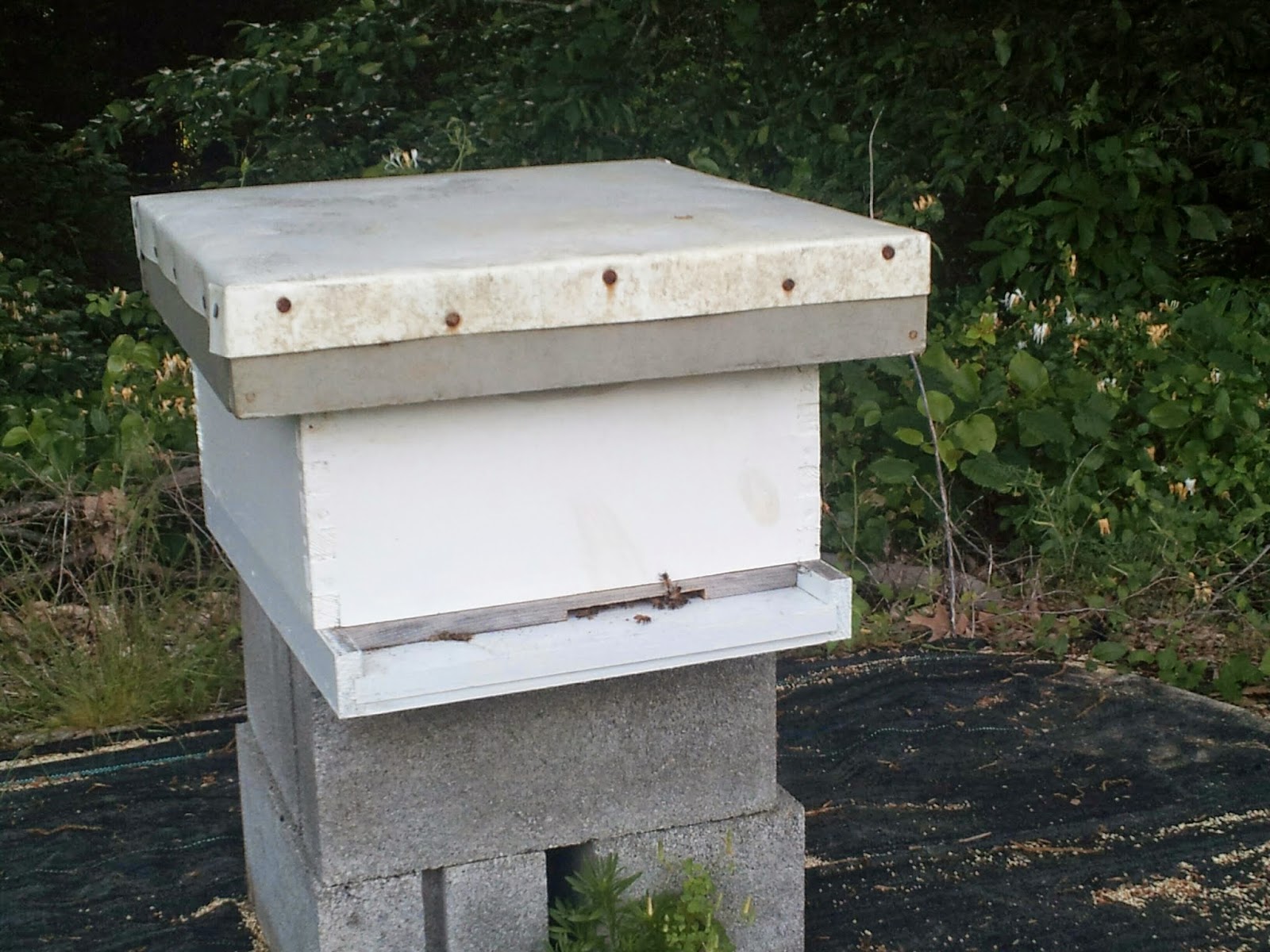 2013 was the first year we had hives, and their health had mixed results. One hive did extraordinarily well surviving the really harsh winter, while the other two hives were hard hit. Talking to the beekeeper (not me thankfully), he blamed himself on the loss of the two hives, having not cared for them in a way that would have insured their well-being. I was hoping for a little better feedback to see if our process was well thought out or whether we needed to tweak it so that we in the vineyard could be better partners with these bees. I guess we'll have to see how it goes at the end of this season.
Posted by Dave at the Vineyard at 5:55 AM