Not Your Everyday Peas 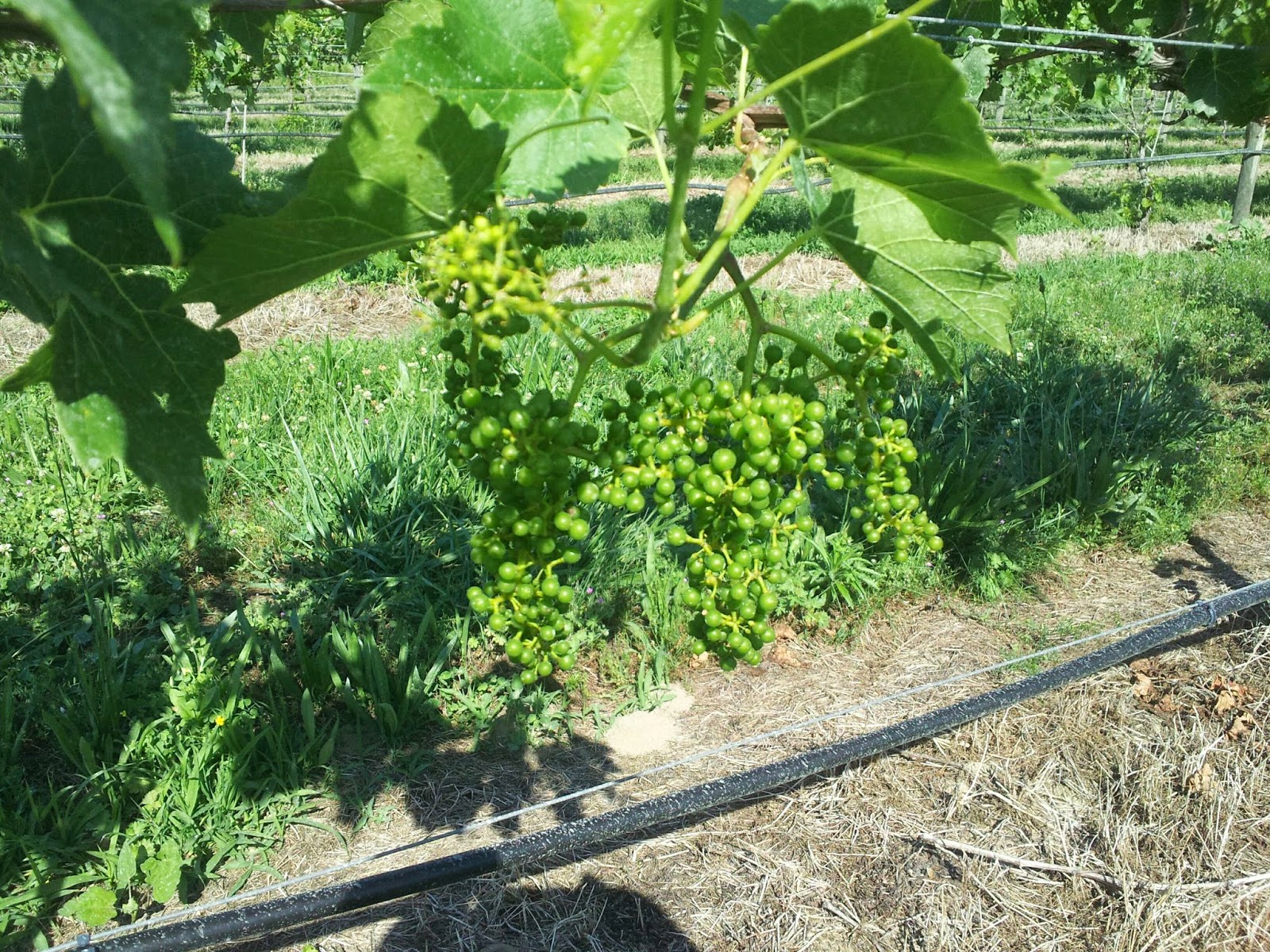 I go north for just a few days and when I return (after a day or two of trip decompression), I notice how far along the grapes have come. In one of my earlier posts just a week or so ago I was talking about bloom. We have rapidly jumped forward ten steps to Step #31 out of an industry standard of 47 stages of growth. This step is officially defined as "Berries Pea Size", where berries are 7 mm in diameter and the bunches have enough weight to start hanging down.

From here the berries will expand in size, and bunch closure will occur simultaneously. This is when I cross my fingers and hope all my spraying has done what it was supposed to do.

The particular berries in the picture are from our Seyval Blancs. They are a French hybrid which appears to do very well in this section of the state. We harvested a ton of these last year, and the wine Diane has made from these has been bottled and is ready for consumption. I can attest that is tastes great. . We expect maybe triple this amount this year; the grapes just look like they are developing well.

Our other grapes are all at varying stages. The Cabernet Franc which are right next to the Seyval Blancs are coming along fine too. Last year they got walloped by Black Rot, but appear to have recovered well and are producing some nice sized bunches. The Viognier immediately adjacent have been through some hard times (fungus issues the last two years) but they seem to be doing a lot better, though we only think we'll get a small crop this year. The Nortons, an American red, look rather weak this year. Though they normally do not have the vibrant green leaves as the French varieties, they appear to be rather faded this year even after we gave them a dose of Nitrogen fertilizer in the Spring hoping that would pep them up. There may be some reasons for their anemic appearance.They were unusually hit with Black Rot last year too, and they don't like the toxic affects of sulfur, which we used for a brief time last year before I found out it wasn't a bright idea. As I may have mentioned more than once before, there are no easy lessons in this business.

Time in the vineyard is a combination of catch up and typical maintenance. Along with the weekly mowing and spraying, I had to pull Dale (our intern) over from his Cabernet Sauvignon duty and have him trim for suckers and arrange the shoots in Block 1 where most of the grapes we will harvest will come from. They are growing like crazy and it is not uncommon for shoots to be extending well above the trellis, 7' in the air. He is trying to redirect the energy from a non-productive area to where it can do the  most good, and by rearranging the shoots with their leaves, he is maximizing the sunlight potential for energy conversion for photosynthesis (remember this from 3rd grade ?). I on the other hand am still delegated to getting the Petit Verdot pruned, putting their cordons in the right position. We may get a very small crop of these red grapes this year if we're lucky.
Posted by Dave at the Vineyard at 6:00 PM