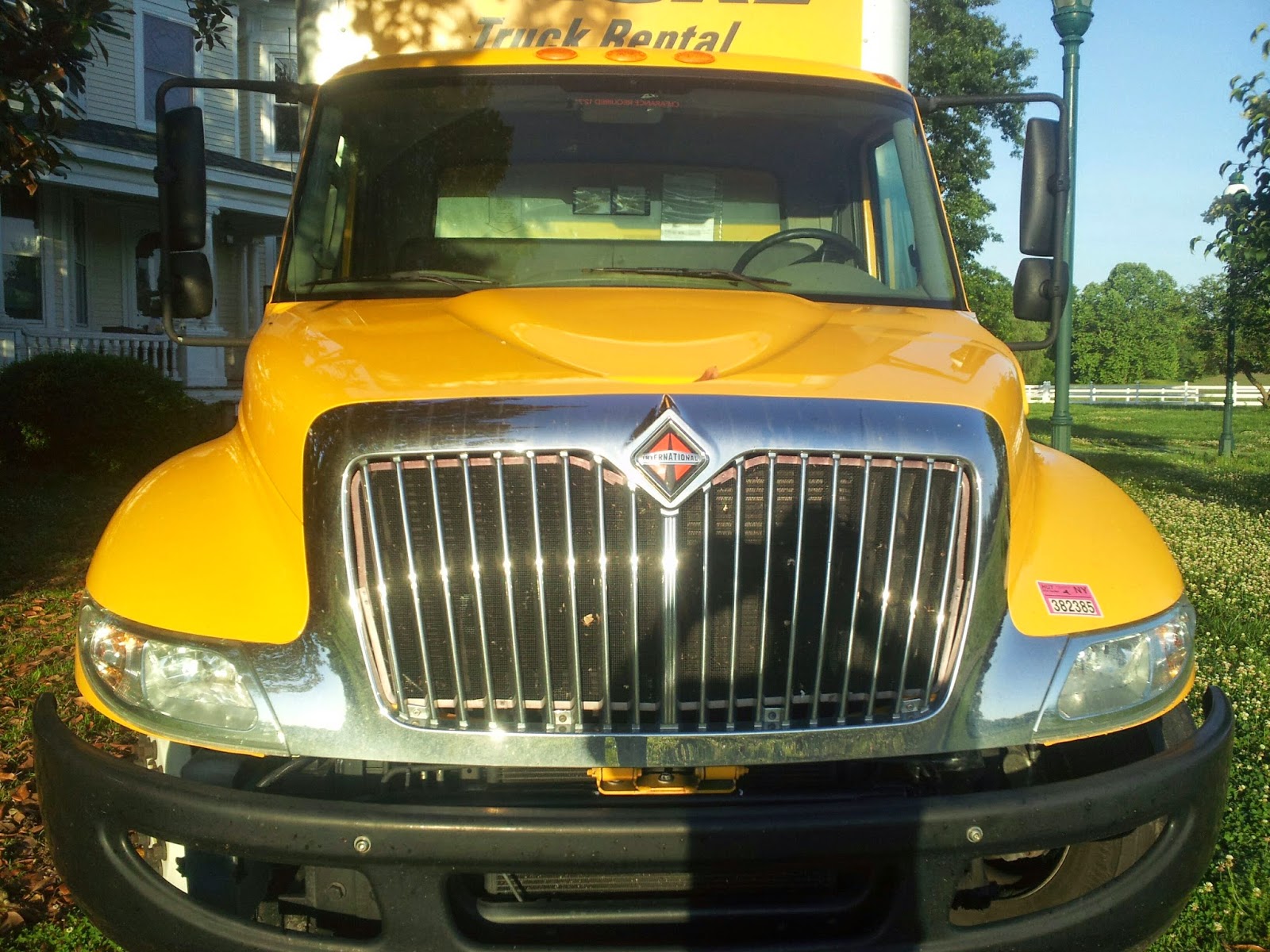 These past few days have been the culmination of our 7 year journey to move ourselves from New England to the state of Virginia (both Commonwealths for some fluke reason).

When we bought our (first) Virginia home back in 2006, we recognized that there would be several years before we were fully moved down. The time frame was loosely set, but it more or less coincided with when we thought we would be getting our first harvest. And of course let's remember that selling our home up north, along with selling my plastics business, and along with getting a winery up and running each played an important role in determining the exact time of an official move to Virginia.

There were several years when I shuttled back and forth, usually with the truck, but sometimes flying if I required a quick turnaround. This is when we first planted Block 1, and new vines needed very little care at that time, or so I thought.  It was common for me to say that watching vines grow was much like watching paint dry. The vines just didn't need my full attention. For every week I was in Virginia, I spent 3 or 4 weeks back up in Massachusetts. Whenever I took a trip south, I easily had a fully packed truck, and during the first two years I frequently was pulling a U-Haul trailer.

In year #3 I was now spending 2 weeks in Virginia with the balance of the month back up in Massachusetts. The vines needed more attention now. I was doing a fairly sloppy application of pesticides, being only worried about the Japanese Beetles wiping out all the leaves. There was now also a fair amount of pruning too, trying to establish the cordons and in some cases directing some newly grown shoots. And each of these trips meant bringing more stuff down.

In all the trips I made coming south, I think only once I came down without a real load of stuff.

Bigger items were also being directed down to Virginia. On a least two occasions I flew north so I could rent a large 20' truck, driving down and unloading it with whomever would help with the unpacking. The house was now getting full, while the homestead up north hardly looked like it had been hand-picked of items felt important enough to ship south.

And then in February of 2012 we bought our house in Elberon. The one with a name: White Oak Farm. It is a monster of a house. Our plan was to empty the first house, forever named [the Vineyard at] Bacon's Castle, and rent it out. All the stuff there would be brought over to where we were going to live, and of course being a much bigger house it provided us greater opportunity to find places for even more stuff from Massachusetts. Again I rented trailers a couple of times in 2013, rented a truck once too to bring down that 17' canoe and anything that could fit around it.

During this time I finally sold my business, and with the sale of a manufacturing facility comes all the stuff that didn't get transferred in the sale. Other than the numerous files (easily 100 trees worth), there were all the neat tools and things that the company had bought during its active 27 years but had become obsoleted as the product mix changed in the plant. For instance, there was a huge, and horribly heavy, granite block that was originally used as an inspection surface, but could be a chocolate maker's dream in a candy factory.

The surge of items that were too cool to throw out and had to be moved south didn't get fully understood however until we sold our house just 2 month's ago. At that time we recognized EVERYTHING must go.I rented a Penske 22' box truck and jammed the thing as full as I could. A 22 footer should be able to hold 3 to 4 rooms of furniture. Rich was available to help with the packing and later the unpacking on this trip. It had bedroom sets, chairs, a dining room table, a craftsman lawn tractor, slate from a pool table (I had to dismantle it to get it out of the basement), a couch, you name it. What was left in the house were the bare necessities for Diane to live until the closing. A queen-sized mattress (on the floor), the washer-dryer, a bureau, some wicker furniture that acted as her living room set, and all sorts of miscellaneous stuff where the time, or the lack of pressure, hadn't motivated us to box them up for safe travels.

Our closing was scheduled for a Friday, so knowing we had "so little" stuff to pack I flew up Wednesday to rent one final 22' truck. Chris was the designated packer with me that Thursday, so he and I went over and picked up the truck around 9:30 am or so. As soon as I backed the truck in position, we were loading the big items in. However, as we pushed these big things to the front of the truck, it left a lot of room for boxes to be jammed in tightly. There was to be no compromise on the use of space. If there was a hole, it had to be filled. We couldn't afford the luxury of getting to the end of the truck and finding there was still more stuff that needed to be packed. Diane was inside doing the box packing, and it was a good thing that her sister Annie came over to help. There were all the dishes, pots & pans from the kitchen, and reading lamps. Glassware and china needed to be wrapped. There were all the clothes still hanging in the closets, and being hoarders we fortunately had kept wardrobe boxes from our 1986 move to Andover that were useful once again. There was the snowblower, that had done a round trip to Virginia and back because of the bad winter Massachusetts was forecasted to have. There was an entire barn full of garden tools and a mower that needed to find a place in the truck. Try to find an efficient way to pack a garbage can with rakes, shovels, fishing rods, and loppers sticking out of the top.

Chris stayed until after mid-night and Annie hung on till around 2. We were all exhausted and there still were items on the ground adjacent to the truck that needed a place. Hoses were ultimately flung into the back of the truck; we were numb to the possibility that the tangled mess that ensued would have to be undone when we unpacked. Diane's car was designated to carry some of the breakables, mostly pictures and flat glass items. We also had 4 coolers of refrigerated items to bring down which we shared our front seats with.

It was way too late to get a room at the inn, so Diane and I crashed on the carpeted floor for the night. We were too exhausted to care about less than soft accommodations, and we knew the anxiety of Friday's trip would make the aches and pains be of minor consequence.

We got up late by normal standards, around 7 a.m. From here we packed up the few things we had lurking around, did a final walk through (or two), started the engines and, I can't answer for Diane, but I never looked back. Virginia had been my home for over a year now. By my calculation, between the trailers, pick-up truck loads, and trucks, we had moved 47 rooms of furniture and stuff. Way too much stuff.

The 625 mile trip really was about 80 miles longer. With the truck I couldn't take the Garden State through Jersey, and I refused to take the G.Wash.Br. through New York. We took the loop around the City and got back on the Jersey Turnpike about where the Parkway intersected it, and then for the most part we followed 95 the rest of the way until we got to be just north of Richmond. We munched trail mix along the way, and had a very late lunch around 4:30 p.m. or so. Diane and I were beyond tired at this point. When we stopped we didn't even have the energy to complain.

Our trip, though long, was uneventful until we were on the final state road giving us only 27 miles to go. It was around midnight now, and we both could almost feel the comfort of a soft bed at the end of a very long two days. But as fate would have it, our main road was blocked off due to an accident by a  driver who missed a turn and barreled off into a phone pole. There was no where to go but back across the James River and follow Route 5 into Williamsburg to be shuttled via ferry back across the James. At this time of night there is only one ferry an hour, and needless to say we had just missed our chance for an uninterrupted drive. For nearly 50 minutes Diane and I sat in our respective vehicles waiting to board the next ferry. It wasn't difficult to doze off, but when the time came we sprung into position on the ferry for the quiet and dark 20 minute ride across the river. Once landing, it was a seemingly quick 15 minute drive to the house.

We were too tired to do much at this point. The truck would wait until tomorrow to be unpacked. Diane and I did unload the coolers, where much to our surprise the ice cubes still had some mass, being helped by a dozen pieces of frozen blue ice. The cat met us; the chickens and cows were assumed asleep.

"Good night" was all we said to each other. Tomorrow is another day.

Posted by Dave at the Vineyard at 3:19 AM