Convincing a cow to do something it is not inclined to do is another one of those animal behaviors that has no easy solution.

Even though I don't have to milk the beef cows three times a day, they do require some care. A month ago Rich and I steered them into a squeeze pen where I administered vaccine shots to the 2 calves. The pen is a lifesaver, holding them still to be able to lift some neck skin for needle insertion. Via mail order or at your local farm supply store, it is easy to purchase hypodermic needles and the  vaccines required for periodic administration. Just don't know what all the fuss is about in the inner city pertaining to getting these needles, but I suspect a heroin shot with one of these babies would make your eyes roll up into your head fairly quickly.

Anyway, with that task behind me, my next caretaker item is to address the fly situation. Cows attract flies like crazy. Especially with all the poop around. Last year I used a small hand held pressure sprayer and it didn't go over real well. One shot of mist at a cow led to the herd running away. So I had to keep my eyes out for a better solution. They make these insecticide saturated ropes that extend between 2 poles, thinking that the cows "just know enough" to walk under it, rubbing their backs on the rope. My cows are likely to use the poles for scratching and not go under a rope; the cow would ask what the rope is for.

The solution came around this year, as technology met the need to satisfy a farmer's craving for new toys. They now have a paintball gun designed for shooting fly repellent globules at the sides of a cow. One application lasts for 5 or 6 weeks.

As with all things that send out flying projectiles, there is a 20 page booklet of instructions, 18 pages of which are dedicated to legal obligations and warnings. Geez. There are only 2 moving parts.....a trigger and its safety. Well, one of the warnings had to do with acclimating the cows to the sound of the gun. They suggested that you go out and feed them some corn (or equivalent as a positive reinforcement) and, standing 30' away, shoot off the gun a few times. They said this may have to be done several times until the cows get used to the sound of the gun and associate it with the other good things going on.

I loaded up the gun with a CO2 cartridge, carried the gun oh so carefully out to the field, paced off my required 30' (no, not really), and proceeded to shoot the gun at the ground, unloaded of course. While the cows were eating from their pails of sweet corn, I pulled the trigger and then the gun went........poof. That's right: poof. Not BANG, not CRACK. Just a "poof." Think of a rolled up pair of socks being tossed underhanded against a wall. Poof.

The cows didn't turn an ear. They didn't look up at the sound. Corn was all they cared about. So, Rich and I then scheduled the next day as our day of reckoning. I loaded the gun with the globules; bright orange ping pong ball sized spheres were placed into the chamber. My CO2 cartridge was still in place. We walked out knowing we had to approach the cows from the side and be about 15' away before I could shoot at their front shoulder area. 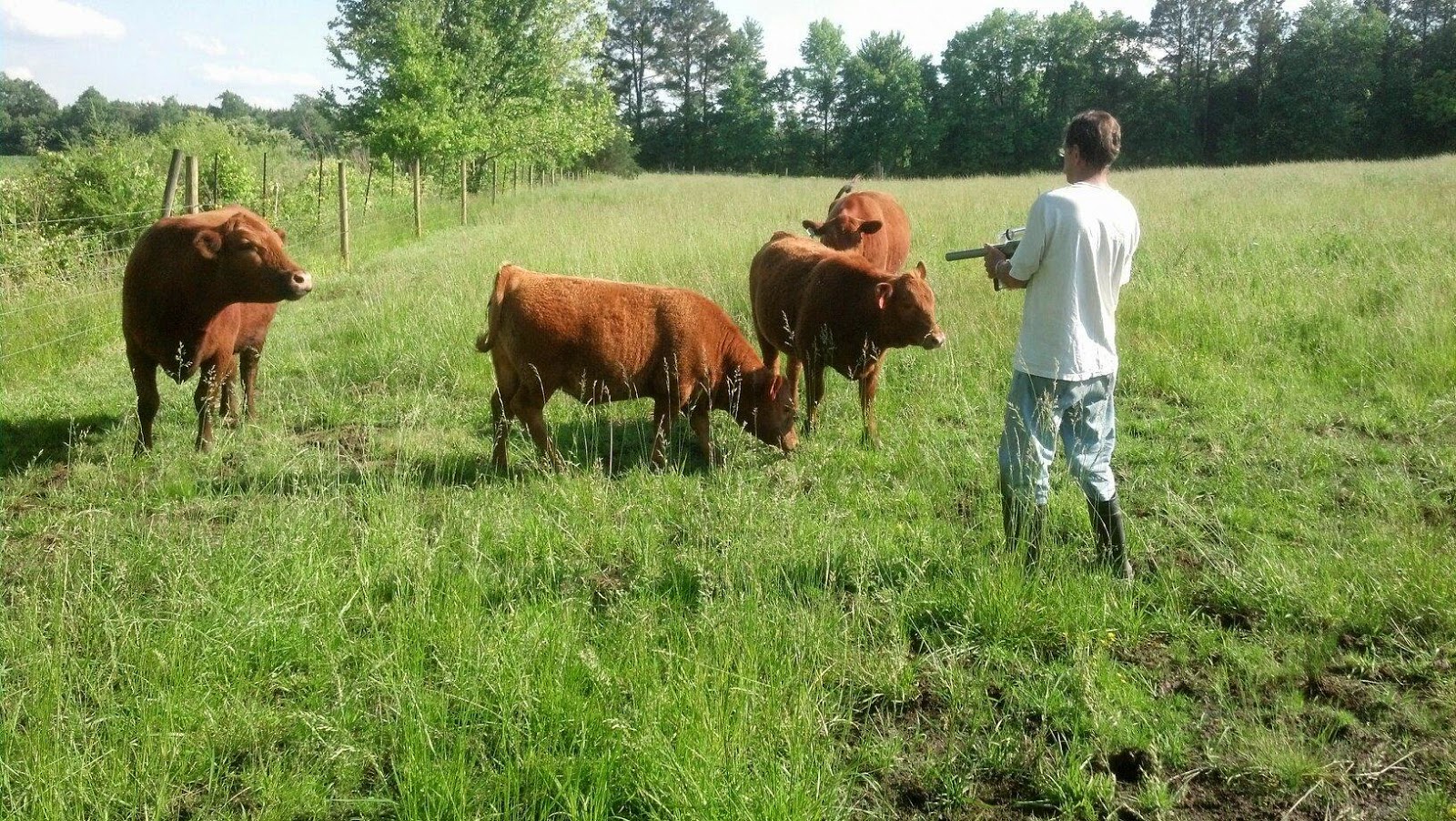 As you would suspect, Rich and I were the greatest excitement that the cows had seen all day. They raced across the field as we approached the gate. Almost had to push them out of the way to allow the gate to swing to allow us in.  I backed up as per the instructions and located the spot on X446 to make my first shot. It had been a long time since I fired a gun and I thought the bigger target would be a good place to start. Holding the gun as if it was a machine gun right out of a Chicago gangster movie, I took aim, pulled the trigger, and then poof, followed by a SPLAT ! Orange slime slipped down the cow's side. The calves now were nearly right on top of me, and without missing a beat I went poof, poof, and one last poof. The job was done. In a matter of minutes all the cows had this insecticide applied to them. They seemed disinterested in the whole process, other than maybe some disappointment that I didn't feed them their sweet corn. Bummer.

I went back the day after to do a fly count on the cows, and I can truly say that they are fly-free. It really worked.

More vaccinations in a couple of weeks need to be done. I think however I'll leave the artificial insemination scheduled in the Fall to the Vet.

Posted by Dave at the Vineyard at 4:37 AM