When Rich turned of "age" I brought him down to a small brew club where he was able to make a case of his own beer. It was a Killians Red knock off, and for his first attempt it came out fairly good.  Since he has gotten more involved in our vineyard episodes, he has taken on a rather exploratory role in drinking wines, where now he regularly chooses odd brands and little known grapes to share with dinner. He introduced me to Carmenere for the first time; a Chilean wine with French origins which has become one of my favorites.

Rich enjoys the outdoor work in the vineyards. A sense of quiet but with the urgency and caring one needs to provide for the vines as they struggle to get through another year of harsh weather and pestilence. But he still likes his beer.

The last couple of trips down, Rich has gotten into making some hobby beers. The first time he made an Indian Pale Ale; a little light on the alcohol but strong on ale taste. This most recent time around he opted for a lighter beer. It is in the bottles waiting for its proper time to pop open and help us define its taste. Taking queues from how we started into the wine business, he is stepping up his game each time he makes a beer. The first time we rolled the barley on the kitchen counter. This last time he purchased a mill cutting the time from a couple of hours down to ten minutes at best. He is also exploring non-traditional aspects of the business: trying to grow hops.Rich purchased six plants and had them shipped in. All bunched up in their little pots, we kept them watered and in the indirect sunlight  for two weeks. The hops have names I had never heard of before. Cascade. Brew Gold. Chinook. Fuggle. Newport.

After some debate as to where the best place was to install a hops trellis on the farm, we decided on putting it over at our Bacons Castle location, allotting it Row #25 adjacent (but not too close) to the Cabernet Sauvignons. Strange bedfellows they make. 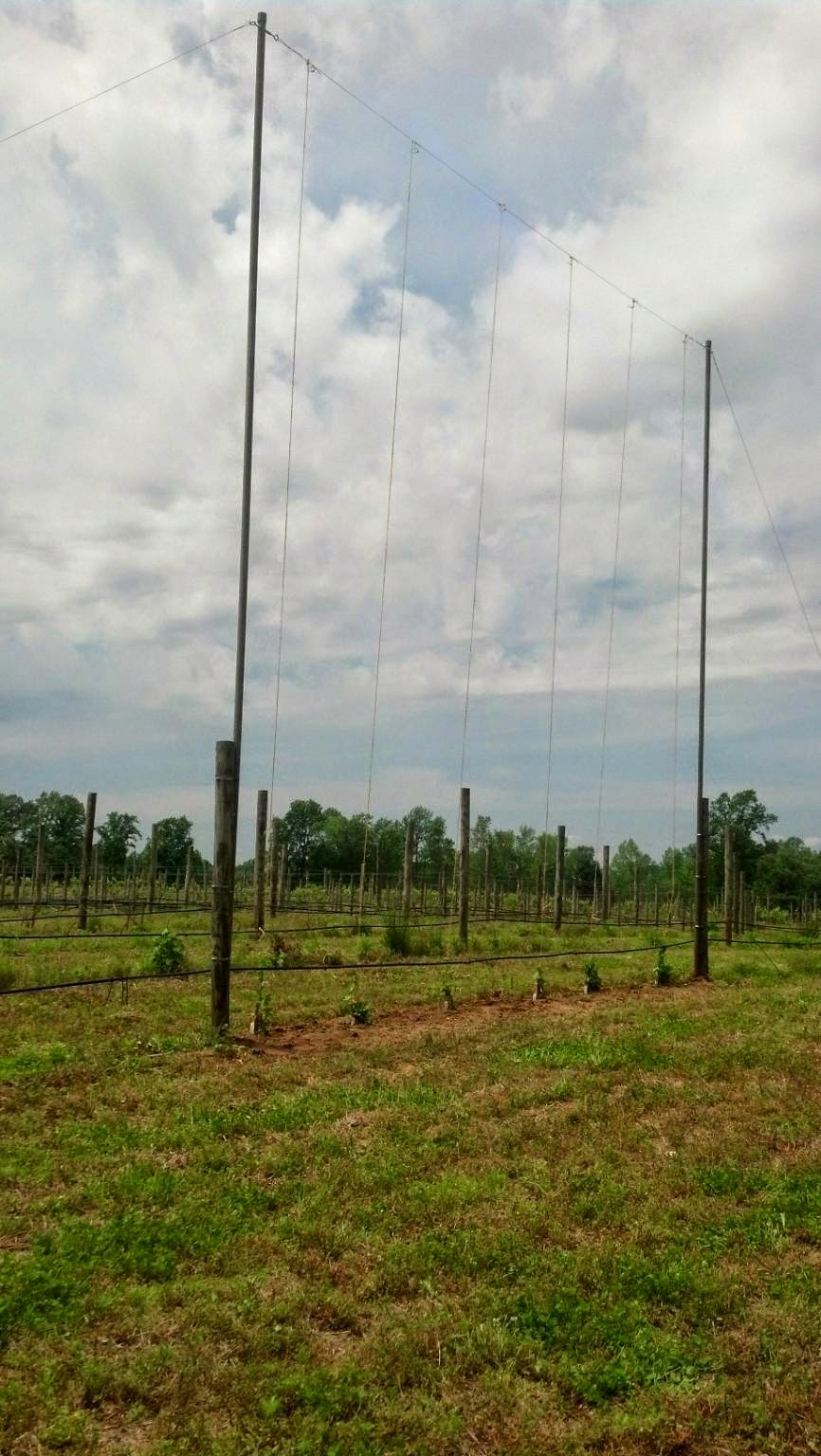 Hops grow over 20' in height, so the trellis we needed to make would look nothing like those we have built for the grapevines. Our heads churned, but typical of many of the solutions I have come up with, at 3 a.m. I had another "Ah-Ha" moment and realized we had all the items on the farm needed to make this super tall trellis. Typical of many farms, there are piles of stuff all over from past projects that are kept around never knowing if there will be a need sometime in the distant future. Our farm is no exception. I have a small pile of steel tubing left over from a chain link fence installation from a previous owner, and in that there were two 20' rails of fairly heavy wall piping.

We strung high tensile wire between these, at exactly the same distance apart as the vineyard poles we intended to lash these to using 6"-7" pipe clamps. We then tied six pieces of twine to the wire, allowing 4' of spacing for each hop plant. Rich and I hoisted the pipes into place and secured them to the wooden posts that were already in place, watching as the twine dangled loosely down to the intended locations for each plant. Rich planted the hops and then placed a stake at each spot to tie the twine to.

Where the plants were tall enough, Rich wrapped the hop around the twine. "Clockwise" he said, "The hops like to follow the sun around as they grow vertically each day." Sounded good.

They have been watered daily since their being planted on May 18th. They all have gone through a shock period as they got accustomed to the bright light, drying wind, and strong heat. But they are still allive. It will be interesting to see how far up they grow and how fast.

Rich will have to decide a couple of things however before it is time to harvest. What will he do with the buds when it is time to use them in his process. And how will he get them down !
Posted by Dave at the Vineyard at 5:28 PM