My last couple of weeks have been trying to play catch-up regarding the first pruning of the season. It really can be described as our final dormant pruning prior to the start of the new year, but since the vines are well under way it is a real stretch defining them as dormant. What we are now doing is limiting the number of buds and/or shoots were are allowing on each vine. Though there is a complicated way to determine this, we are basically leaving 24 shoots per vine.

Rich has been busy on the French vinifera, while I am on the Nortons which require a completely different mind set in how they are pruned. I also hired an intern this year, and assigned him to the Cabernet Sauvignons to prune. It is a great place to start a new guy. The vines aren't overly complicated to understand at this point. He is primarily setting their height for cordon development this current year. He also will be on weed patrol, inter-row ground cover cropping, trellis repair, "sucker patrol", and irrigation repair. It is a good way to be introduced to the vines without being overwhelmed.

Though I wish all this work were behind us, to get it done by June 15th is still OK. It must be done before the shoots get too long and the tendrils are fighting against your desire to spread out the canopy for proper light distribution among the vegetative and fruit growth of the vine. The vine is growing at its own speed and now they are at pre-bloom stage. 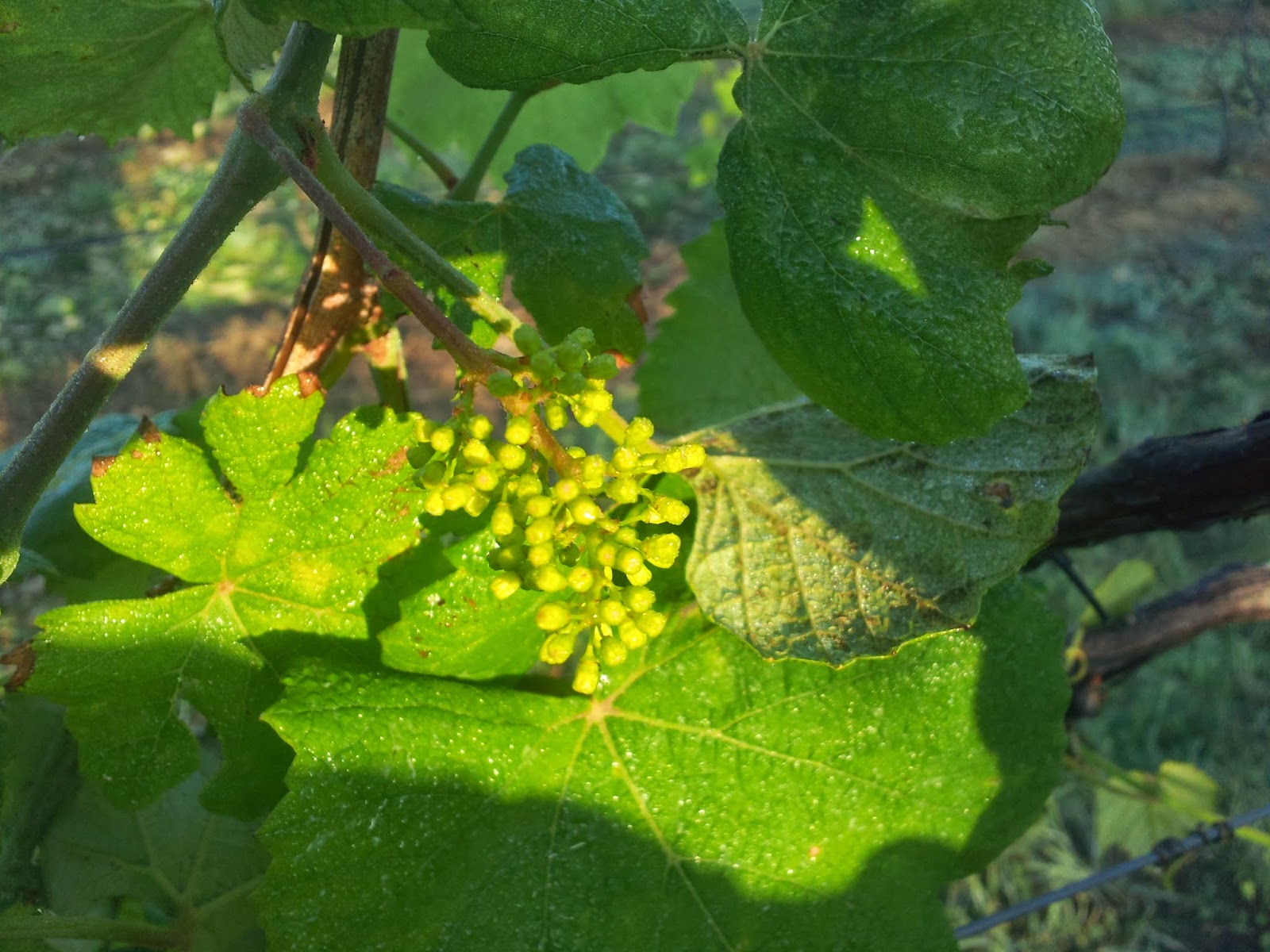 At first you would think you are looking at little tiny berries on a stem, but upon close examination they really look more like tightened tulips that have yet to open. Many are closely packed, while others are a bit more loose as in the picture. The designs for these bunches follow the genetics of the type of grape that they are. Some tend to be rather tight, while others a bit more loose. Loose bunches are ideal where we are, because it lets the breeze dry out any moisture that can be trapped between the grapes, providing fewer places for fungus spores to hide and grow.

This is a critical stage in our spray program. When we spray we need to get into all those little crevices with the fungicide to prevent any kind of spores from making these small spaces their home. If fungus is allowed to stay there, they will remain invisible until it becomes really hot and humid in July and August. Our berries will be fully formed at this time, starting to go into a stage called veraison where they change from green to the color of the grape, either a deep red or a vibrant yellow-green. It is also a time when the skins begin to soften some and that is when they are most susceptible to  fungus invasion. Bunch rot, sweet rot, sour rot, black rot etc.etc. all bring nightmares to a vintner. And bugs aren't much help either. If they penetrate the skins looking for some sweet nectar, that it all it takes for the fungus to spread wildly.

It is so much easier to grow grapes in California, where their weather is a lot drier and there is a steady breeze from the Pacific Ocean. They are not plagued with all the diseases we experience in Virginia. It is the choice I made.

Posted by Dave at the Vineyard at 4:55 PM