What City Folks Think That All Country Folks Should Have

For a year now I have been directing projects that my father could make when he was in his winter home in Florida. Simple things I imagined. A wrench to turn off an underground water valve. Engraving some numbers to attach to the vineyard posts. A more complicated project such as a goat feeder since I know I will have goats in the not too distant future.

With that being said my brother Ron decided that no good farm should be without chickens. My experience with these foul is that farm fresh eggs are way better than store bought. The yolk is richer and has more color than the pasteurized eggs that the big box stores sell you.  I know this because a couple of my neighbors have brought over eggs they have in excess....it's not hard for a handful of chickens to crank out over a dozen a week. [cholesterol should  not be a major consideration]

So all of a sudden my father's project was diverted, from goat feeder to a more immediate need of a chicken nesting box. Ron was going to visit  me in the Spring and he was determined to bring up chickens from Florida.....there had better be a place for them when they arrived. Being short of time to build a chicken coop, I sucked it up and dropped $99 on a small chicken coop with the idea that I will place it in a fenced in area that had previously been used to protect the vegetable garden. My father proceeded to build a multi-level nesting box, with removable partitions should size matter to a chicken, and with a slanting floor that allowed the egg to roll to the front of the box. Made out of 1/2" exterior ply, this thing could support a car. Ron on the other hand built a portable chicken coop, with hinged top and chicken wire enhancements, so he could drive north for 600 miles and have the chickens oblivious to the time travel. 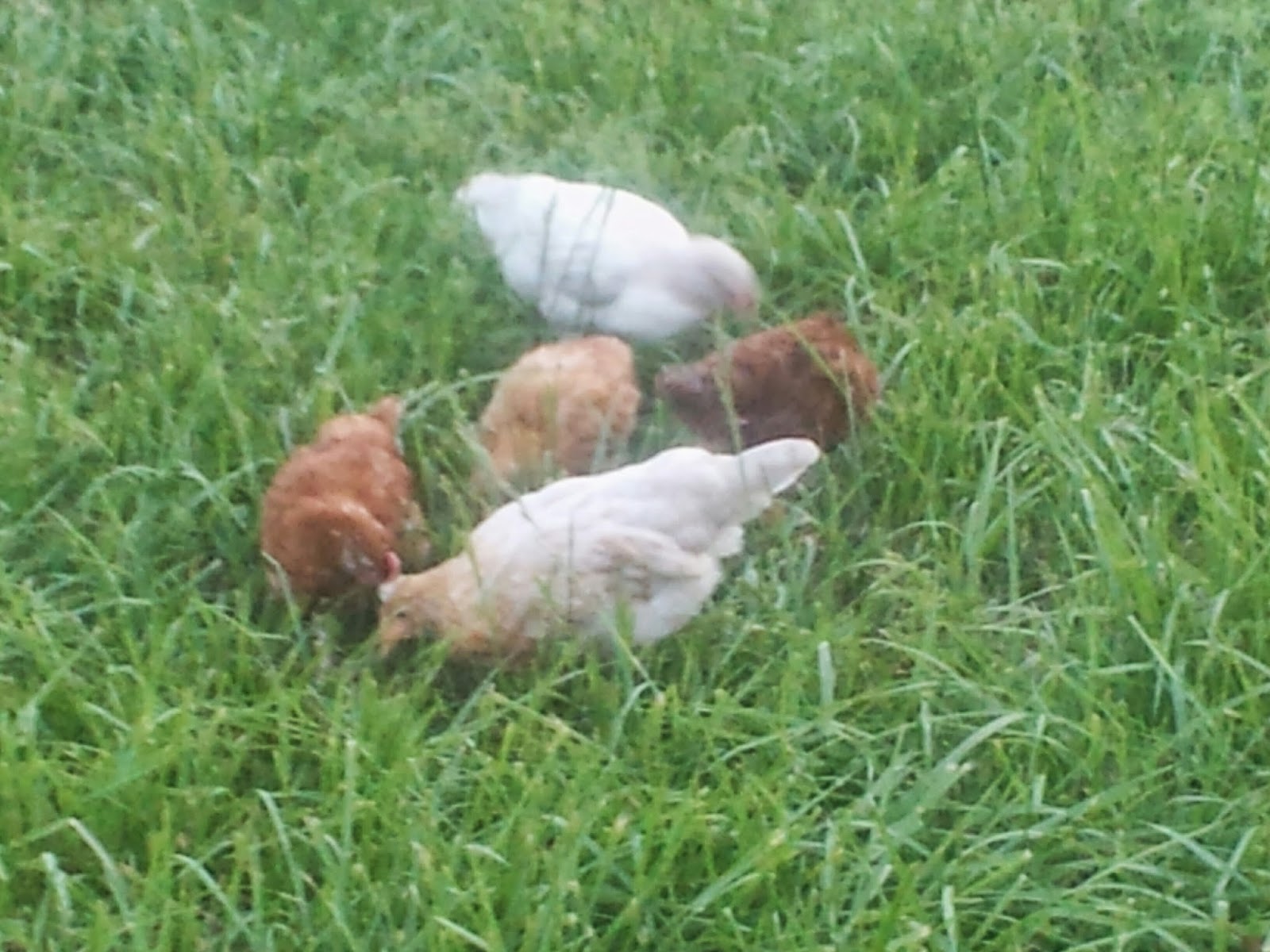 But Ron did not just build a box. For weeks he visited a local chicken swap to understand the hows and whys of chicken purchasing. Pullets, roosters, hens, chicks. All new jargon to a city boy. The time came near to his trip north so he shelled out the $24 for six chickens, presumably all female hen-types. There were a couple Rhode Island Reds, and Americana, and who knows what else. Getting pedigreed chickens is not a priority at these chicken swaps. So for a week Ron watched over these chickens in his garage as he acclimated them to life with a Sheldon. They never had so much attention.

Being maybe 6 or 7 weeks old when they arrived here just the other week, Ron and I introduced them to their new home in the vegetable garden. The new coop, up on legs, was eagerly accepted, and the fenced in area was 1000 times bigger that the small cage Ron had them in.

Chickens are chickens however. They navigated the parameter until they found a hole they could squeeze through, and every day they manage to go through it and relax under a boxwood bush immediately adjacent to the fence. They don't tend to wander far, though I have spotted them in my backyard. My cat either hasn't spotted them, has but doesn't care, or the chickens are just fast enough to stay outside of claw range. As they get bigger I suspect they will be able to handle themselves, though to be honest I have accepted the fact that THEY ARE JUST CHICKENS !

I did the "Rocky" thing once, chasing them around the pen to get them in their coop at night.....a locked haven from predatory creatures. It was a loosing battle. Now I just wait for 8 p.m., put a fresh bowl of feed (medicated of course) in the back of the coop, and wait a minute or two for the march into the coop. Seems to work without too much grief. They have always been there at night time.

One morning I was out and about at sun up, and heard one of them give the cock-a-doodle-do. A rooster in our mitts? I slowly approached them and they clammed up. Other attempts to spot the culprit have been without success.

Chickens start laying eggs when they are about 6  months old. So sometime during September I should be able to have farm fresh eggs. At a store price of $2.99 a dozen, I hate to think what my break even point is for these chickens.  Oh, and for you city folk, you don't need a rooster to get eggs !

Posted by Dave at the Vineyard at 2:18 AM