As I look out my window, I barely see the progress made this week. Not that there was little progress....there are just trees in the way of a full panoramic view of the new building. This past weekend was devoted to catching up after a gross engineering error, and it seemed like everyone was spinning in place as the otherwise well orchestrated plan took an unexpected twist.

The concrete guys came in and spent an entire week laying down sand. A pressure test on a buried water line blew, so that had to be excavated and repaired. Platforms had to be built for concrete pads which will hold 3 air conditioning units, along with a humongous transformer. Maybe a generator will slide into a spot here too. And then there were the yards and yards (or is it tons and tons?) of gravel that was brought in and tamped down.

I found out why they didn't just throw all the broken cinder blocks from the "bad wall" into the center to just be poured over. Turns out that if one of these block pieces happens to be thrown over a buried piece of PVC, it might rupture the piping when the additional weight of the slab is put over it. Actually makes sense.

On Friday the metal weave and rebar was put in place in preparation for the slab. It will take 2 days to drop that much concrete in place. 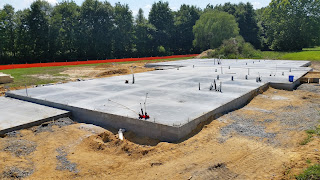 As you can see the slab has been laid down. They did the major portion in one day, and used a 2nd day to do all the pads and steps that are around the parameter. It was a lot more work than just having a cement truck back up and drop the many loads. Four guys riding around on machines that sort of resembled those swamp air boats you see in the Everglades, evening out the slab to align with the outer walls. Another 4 guys troweling edges and cleaning up around all the piping that was sticking out. For the most part, it was completely set by the end of the day, before they actually left the site. The framing is next. The building is beginning to take shape and allow one to better visualize the 6000+ square feet of the completed Visitor's Center.

DO YOU KNOW WHAT THIS IS GOING TO BE ? 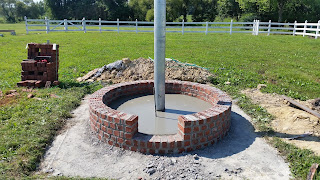