One of his placements was to put floor drains in the bottle-barrel room. Two drains in all.....1/3 back from thee rear wall, 1/3 forward from the front wall. When they finished the plumbers saw that the middle third was a lot bigger than the two other segments. I don't think they used the word: "Whoops". Sounds too prissy in the building trade. Expletives are in order, and fortunately in this case they weren't self-directed.

The site supervisor was called over, and he took out his giant sized tape measure and started to measure all the obvious things, starting with the front to back measurement of the wall locations. The rear wall, all 110' of it, was off by 4'. Though a "Do Over" was an easy answer, some effort was made to see if the design could be altered to accommodate this error. Unfortunately, trusses couldn't be changed and roof lines couldn't be altered without significant costs being added or structural integrity being compromised.

The error was identified....miss reading the specs. on the blueprint by the Degree-certified engineers that staked out the job. Determining who was responsible (and who will pay for the repair work) was easy; now urgent scheduling of cement trucks, concrete contractors, and masons had to be entered back into the work load immediately to try to remain on schedule with all the subsequent work that was already tightly planned. What a mess. 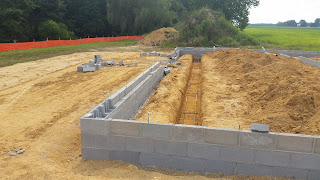 The masons worked both Saturday and Sunday on this. Two new walls had to be built. The fireplace, that had been centrally located, was severely out of skew and needed to be rebuilt. Brick counts were off and the Supervisor had to race off to pick up more bricks and mortar....fortunately the supply house was open till noon on Saturday.

It had rained heavily shortly after the new ditches were dug. Our good luck with the weather had finally run out and the site looked like Amsterdam with all the new "waterways" holding the water. Nicely dug building pads had to be ripped up and dis-functional walls had to be slotted open to allow this water to drain off. Some pools of water still remained however and the masons had to adjust their mortar mix so it wouldn't dissolve in place while they laid their brick. They tried very hard to make order out of chaos.

And when they were done, the old wall still has to be dismantled and moved. What do you do with 382  cinder blocks, some broken, some not, with dried mortar hanging from all the edges?

DO YOU KNOW WHAT THIS IS GOING TO BE ? 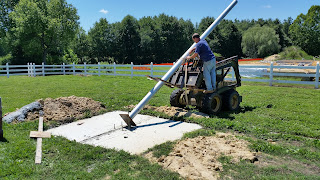