Being Framed - Building the Winery: Part 14

Wow, am I behind the eight ball. This past week has been 100% harvest, and while we're picking grapes the building has absolutely taken off. This is what 12 guys (and 1 gal) can do in 3 days. A day of laying out the walls, a couple of days putting up the outside framework, and then all of a sudden the plans move from being 2-dimensional to something where one can actually picture what  the finished product would look like. 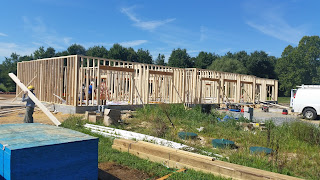 The weather down here has been great for both builders and grape growers. Sunny, with the occasional cloudy day, and nearly no rain.

The 7 openings you see in the front are for carriage doors, since this will be a giant-sized carriage house when it is completed. The first owner of our home was Harry Spratley ("I'm just wild about Harry, and Harry's just wild about me" fame), who spent his life partying it up and raising carriage horses for the NYC carriage trade. The new building was inspired by the farm's original purpose.

As for picking, our first harvest in 2015 was Seyval Blanc. Where on a mere .8 acres we pulled in 5 & 3/4 tons of grapes. It was our largest crew ever, with 18 people taking part in the 2-day picking event.For this white grape we needed to make multiple 11 mile trips from the vineyard to the winery because we were picking faster than we could process and we needed to recycle our yellow lugs faster. All of these grapes resulted in 2500 liters of wine juice, after they were destemmed,crushed, and pressed.

Two days later we picked our Viognier. From a poor showing of 180 pounds last year, we pulled in nearly ten times that this year, primarily due to the added attention to pruning methods and being  a recovery year after we had a bad disease problem in 2013.

It is up to the winemaker to tell us what is next, but I suspect after pulling our whites, the reds will start taking center stage for future pickings. It is a combination of Brix, acid, potential for disease, and weather that determines when we pick.   Based on our weekly readings, I think the Petit Verdot are next in line.

Posted by Dave at the Vineyard at 2:48 PM