From the Ground Up - Building the Winery: Part 9

With the well being put on hold temporarily, the next big "Action Item" is putting in the foundation. Unlike up North, where nearly every building has a basement, footer foundations and poured slabs seem to be the norm here. It is probably just as well, after you took a look at the high water table in my previous post.

It may lack excitement to most readers, but after nearly two years of fighting to get this far, to see some earth being moved around and some concrete poured is pretty exciting stuff.

After some flagging, a concrete firm came in and dug a trench all around the parameter of the building footprint which was about 18" wide x 36" deep. In this gravel was placed, and then nearly a day's worth of setting in re-bar. Laser sensors are now used to place "sight rods" which indicate exactly how high the concrete is to be poured in and leveled off. And then the true exhibition took place. The site supervisor had his directorial debut, where 3 different companies came in to perform "Act One" of the foundation project.  It started with a brand spanking new half-million dollar truck with this extraordinarily long boom on it which pumped concrete and shot it into the trough that had been dug. The operator used a hand-held control box as he directed the boom and nozzle into the ditch, slowly shooting the concrete around into the new walls. On one side of him the concrete workers hand leveled the paste, while the traditional cement truck backed up to the pumper and shot it's barrel-rotated mixture into the pumper to keep it primed. 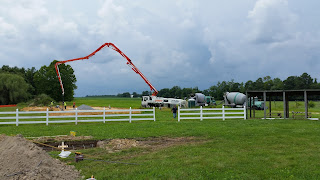 It was an all day project which required 2 1/2 cement trucks to provide all the cement that was needed. It only needs a couple days to set before the masonry guys can come in to start the brick work....


WHAT IS THIS GOING TO BE ?

We have a side project going on too. I'll just be putting up pictures as it moves along in unison with the new winery building. If you have an idea as to what it is going to be, send your guess to my email address: DSheldon23883@gmail.com
If you already know, please don't post it yet; it'll be interesting to see the varied input which I will share in subsequent posts. 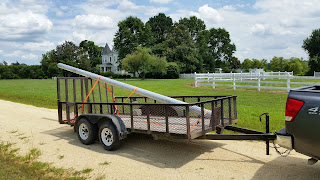 Posted by Dave at the Vineyard at 3:41 PM