The site has been fairly busy this week, but in a few short weeks all the work that is being done right now will be invisible. The slab will be poured soon, but before it is one must put all the feed piping in that will connect surface drains or allow feeds of wire through for all the above ground connections to be made later. It is a strong testament to these subcontractors who "somehow know" where the walls are going to be built, and make sure these lines are placed exactly right so the specs. can be accurately followed on placements of toilets and sinks, floor drains and electrical power. 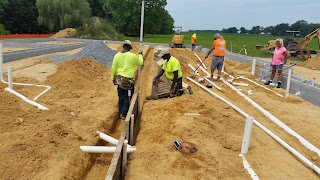 It is a jungle of PVC pipe....white for the plumbers, grey for the electricians, working their way through hand cut ditches. The pipe is buried under just a few inches of soil now, but when the slab is set there will be 12" to 18" of sand, gravel, and concrete over the tops of them. There will be no going back to tweak their location. The sub's reputation is at risk. Nothing worse than a framer pointing out to the G.C. that what's his name didn't have a clue, and a change order is required to move a wall or position.

In the meantime, working within the same parameter walls, another crew is putting in the framework to pour a center stemwall.....a wall going  down the center which will hold the weight of the center of the building. Fluorescent shirts seem to be the rage in the building trades as you can see. Piping had already been placed allowing for feeds from the front to the back of the building.

We have been lucky so far in regards to the weather. Any rains we have received have been only light ones; none of which have affected the schedule.

Over in the vineyards the work is hurried as we try to get everything ready for harvest. The grapes are rapidly changing color which is a sign that harvest is just around the corner. Diane has measured the BRIX twice so far, and with a BRIX on the Seyval Blanc approaching 16, it signals picking to be in about 3 weeks. But as mentioned in prior blog entries, late season fungus might accelerate our harvest plans, and a heavy rain might dilute these readings and set us back some. Last season we starting picking August 18th, so we aren't far off from this. 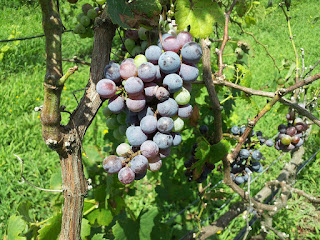 DO YOU KNOW WHAT THIS IS GOING TO BE? 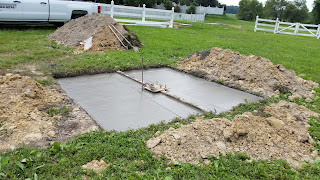 Posted by Dave at the Vineyard at 3:42 PM