All Is Well - Building The Winery: Part 8

My blog entries have been rather quiet lately, but the vineyard activity has followed its typical (if there is such a thing) routine. We  had a fairly good harvest last year, and with that success we feel compelled to try to beat it this year.

My son Rich has joined us full time, primarily working the vineyard over at Bacon's Castle, while I am left to tend to the newer vineyard that is right in front of our house. He certainly has more vines to tend to, mostly established vines on about 6 acres. My vines are newer covering 4 acres. In fact, of those I am watching over, we planted 1475 Malbecs just this past April to replace nearly the same number that didn't survive an insect onslaught.

But the real news is that after nearly 2 years, we finally wrestled down our financing for the new Visitor's Center and will continue the building effort until completion, scheduled for sometime in late fall. Hopefully I will be more active with the blog, but for those that want to follow us via Facebook, check out Hampton Roads Winery.

We had to change builders during this process, which was no easy task. And the ordeal with the Bank had its own fair share of grief which would have killed weaker men. It is one of those memories I care not describe without an evening's supply of wine to complement the story. We are now off to the races, as they say, and the first step occurred this past week with the well guy driving on the lawn and starting to make an exploratory pit prior to drilling. 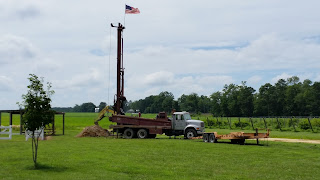 His enthusiasm had to be dampened however, for after I went out to poke my nose into his business, I found out that he didn't have a permit to drill a Class 2B well , which is required for an operation which is expected to have the general public involved. I had to pull in some favors, but the very next day we had a State Inspector out to view the site and make recommendations. The downside is that getting a bureaucracy involved  takes time, so our permit won't arrive till probably later this week. So right now I am looking at this hole that has filled with water. A visual tells you how high our water table is.....within 12" of the top surface. Yikes ! You would think the earth would move just by walking on it. 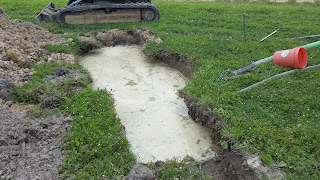 This week we should also start to see some foundation work being done. All this will be on the building pad we had put in last October & November. Seems like ages ago.

With only 4 months to Grand Opening, there is soooo much to do. As I work through the largest To Do list one has ever seen, of course not alone but with the help of Diane and Rich, I'll keep you posted.