There wasn't one of us missing out on all the news coverage regarding Hurricane Matthew. The hurricane was performing just as many of the models anticipated. Significant damage was occurring south of us. The Carolina's were getting walloped with severe flooding and unfortunately storm-related deaths. Compared to what they experienced, we had little right to complain.

But there is still the optimistic side of us that wants to think that somehow we will escape the wrath of this weather event. Chris was steadfast in getting his wedding underway and on schedule.  He had planned on an outdoor wedding, so the white folding chairs were placed on the back lawn, over looking the pond that reflects the sun on days when it doesn't have clouds to mask its performance.

I on the other hand am more the realist. I took as my job for the day to just get out of the way. My A-type personality would only interfere with Chris' driven desire to stay on message and schedule. My Dad was in town for this event, and some relatives passed through in anticipation of the evening's ceremony; they were my excuse to remain distant.

I am not sure when certain things happened. I was watching from our home's kitchen window the wind and rain sweep across the back lawn, knocking over the white chairs. Was this Matthew teasing Chris to see if he had it in him? By the time I made it over to the winery all the chairs had been brought inside. The arbor that Chris and Lacey would stand under during their vows was at the back of the center space. The huge carriage doors were wide open so you could glance through the arbor and notice nature's wrath was not taking a time out. Fortunately the winds whipped sideways, keeping the torrents of rain outside. 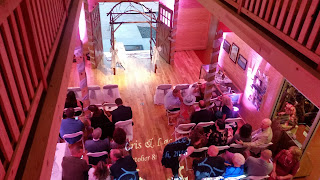 Due to a "miss-step" in the previous night's rehearsal (what rehearsal?), we were all trying to figure out a common way of proceeding with the wedding. Everyone seemed to be in the wrong place prior to the beginning, but we all knew where we needed to be when it officially started. Lacey was upstairs in the loft with all her bridesmaids. Chris had a following of best man and ushers hanging near the front ready for anyone to give a sign. Some people, like Diane, managed to be seated where they were intended. I was completely out of place but worked my way next to her once everyone's eyes were watching the bride come down from the loft and walk the center aisle. The D.J. and the lighting guy had worked together before, so they pretty much controlled the flow.

Ceremonies like this always seem to be thought of positively when they are all done. The vows are the key ingredients that make it all seem flawless.

The reception was in our Function Room. Round tables and plenty more chairs were squeezed in for a truly unique, simple yet Southerly, meal. The caterers, who had originally intended to have a tent set up outside, were forced to grab a corner of our bottle storage room to prep the food. The white chairs set up for the ceremony miraculously were removed to ready the area for a night of dancing. 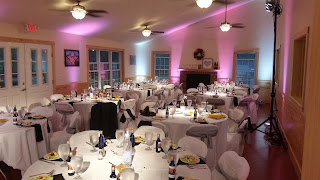 It was a long night. Guests pretty much ignored the outside weather as much as they could. There were periods when the rain paused, but for the most part it was a miserable night outside the walls of the winery. One of the things Chris did was hire a bus to bring guests back and forth from a hotel in Williamsburg to here. But we have the James River between these two destinations, so ferry schedules were very loosely adhered to. Though these guests made it to the wedding on time, their departure and arrival back to their hotel rooms missed by hours. The photographer never made it home; roads were blocked that prevented her from going forward or turning around.

Meanwhile our stellar crew put the place back in some resemblance of order; we had a winery to run the following day. Diane and I returned to our home, a few hundred steps away, not realizing others would be sitting in a bus for nearly half the night.

Chris and Lacey were beginning their life together.....officially as husband and wife.

Posted by Dave at the Vineyard at 2:59 PM