Even though the vineyard and winery are the mainstays which keep this operation running, I need to remind people that it is still a farm. Sure, we farm things other than peanuts, corn, cotton, and soy. Grapes are our "row crop" of choice. But we still have our animals (Diane says they are my animals, not hers).

Our four Red Angus cattle were artificially inseminated (AI) way back in January, and if they were true to form, they were all due October 22nd. There really isn't much for me to do during these 9 months, but as the date came ever closer, I went back to the fields 2 or 3 times a day and walked around the cattle to see if we had any new arrivals. I've gone through this calving thing a couple of times, but it is always a high time of anticipation during calving season.

The first calf to drop was from one of our heifers. It was her first (that is what a heifer means, afterwards it is a cow) born early on October 16th. Sprite little calf. Was up and hobbling within hours. Had many of Mom's features.....nice shaped head, ears that went out horizontally. We don't name our cattle, but this one will get a tag number: D44A. The D represents the year born 2016, the 40 shows the female blood line, and the A shows who its mother was in that blood line. No need to give the bull in the process much significance, though it is noted on the tag above the number. "Sun King" was the absentee father.

I have up to 3 days max to tag this calf before it can out run me or squirm it's way out of my arms. Also, it is during this very short period when the mother has this rude awakening that it has a young one to care for and becomes very very protective. Nothing worse than a 2000 pound angry mother coming straight at you. You can't stop it. You can't out run it.Dangerous times for someone only carrying a tagging gun.

So I was out walking the next day to see if the maternal instinct had arisen in this new mother. She was in the middle of the pasture, eating grass with the rest of the herd. No calf in site. Did she abandon her? Is the calf lost or did it die overnight? Just seems strange to me that a cow would just leave it's new calf and go off on it's own to chew grass. So I started criss crossing the field trying to find the calf. I always keep an eye on the mother to watch it's eyes watching me. Generally they tend to look where the baby is to see if I am getting close, too close. The new mom gave no indication this time. Pretty much ignored me completely. But in time I found the calf, curled in a ball hidden in some tall grass.  It was in the next field where mom must of been hours before. It's ears were flickering. Must have just been tired from all this earthly stuff outside the womb.

Not to lose track that this was a major opportunity, I raced home to get my tagging gear. I returned to the field and pretended I wasn't interested in the calf and in a round about way worked my way over to the calf. Straddling the calf I held it down. It was not happy, or maybe it was just scared. A calf bawling for mom is a bone chilling sound.....enough to capture the attention of the entire herd, and especially mom. I had about 30 seconds before I would be head-butted into the next county.

Under duress the tagging gun always seems clumsy. I had this bright orange tag (think Home Depot orange) with the number already inscribed. I had to get it on the ear straight, with the number facing forward. I didn't want to hit any blood vessels in the ear so I had to feel around where I could penetrate the ear with this arrow sharp tag. I had done this before, but that didn't matter. this time A44X was coming at me. The cries were getting louder, or so it seemed.

And then like the calf roper in a rodeo competition, I jumped up having completed the task. The calf bounced up too, now that my human weight was removed. Mom was not pleased, but she had her calf back. Time for her to bond again. Licking the sore ear. Offering milk to her young one; warm milk solves a lot of ills. 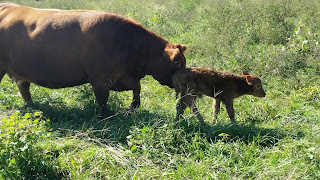 D40A was the next one to drop, born five days later on October 21st, only one day early. It mother, another first time mother, seemed so disconnected from the whole process. This distance I see between the new mothers and their newborns is hard for a human to fathom. Just seems strange to me. Everything seemed fine for a couple days, but on Sunday October 23rd I spotted a problem. The calf had a severely bulging right eye. The swollen eye was white. Even a neophyte in this cattle business knew this wasn't good, so I called the vet right away.

My normal vet was not on duty that Sunday, so I ended up talking to a new vet I had never worked with before. Typical of vets who live around these large animals all the time, they asked that I have the calf segregated from mom before they come out. Nothing worse than wasting time as the owner chases down a sick animal. (P.S. to the Vet: nothing worse than taking a newborn away from it's mother !)

The mother in this case was the one heifer that had always allowed me to scratch it's ears. None of the others really let me get too close. Would it be equally friendly "knowing" I was here to help? I asked Diane to get involved here, primarily as a distraction. She walked in front of the cow, trying to turn it's attention towards her as I walked around the back side of the cow to get close to the calf. The calf was circling its mom about as fast as I tried to calmly approach it, always considering I might have to do a quick dodge out of harm's way should I push mom too far.

At some point the calf stood still, right next to mom. I slowly walked in, put my arm around the calf, picked it up and walked ever so cautiously towards the squeeze pen, where I could close up the fencing to protect myself from a cow who realized a bit late that it's calf had been kidnapped.

The vet finally showed up and gave the eye a good look. The prognosis was bad. She thought that maybe mom had given the calf a kick when it tried to get some milk. The eye looked lost, and there was some concern that the calf might be totally blind; fortunately it was not to be the case we found out later. Blood work was taken, an IBR shot was administered, and some antibiotics were delivered under the eyelid to reduce the swelling and deter any infection. We even got a chance to weigh it; a sprite 63 pounds after 2 days!

As of today, almost a month later, the two older cows have not provided calves. At this time they have zero chance of coming through. So what does that say about AI, even after the vet had confirmed they were pregnant? Not much I'm afraid. In the last 8 AI applications, I had 1 bull (last year) and these 2 new calves (both heifer calves by the way). 3 out of 8 even though I am paying for sexed semen, AI injections, and pregnancy checking is not a very good ratio.

Time to bring in the bull!