When you are juggling a lot of balls, there are a certain number of balls you feel comfortable keeping in the air and one more ball thrown in the mix inevitably means balls will begin dropping on the ground. Nothing could be more of an example of this than the introduction of a new winery building, and the completely new businesses of retail and wholesale wine sales. The success of this venture is key to the continued operation of the farm and vineyard, and need less to say it soared to the top of everyone's priority list almost all the time without exception.

Though Diane was in charge of retail operations along with her normal wine making duties, Rich jumped in to be the primary grounds keeper and I took on the responsibility of bookkeeper and outside sales contact. I did my cursory work in the field, but it was never really enough. Rich found himself torn between doing the required vineyard work, but also trying to keep the winery as spiffy as reasonably possible. When he was mowing the winery grounds, he wasn't pruning or arranging shoots. And Rich is also the age that many of his friends up in New England are getting married, so Rich would disappear in the middle of the season to take a 600 mile jaunt to watch a few "I dos" and share in some pre-wedding parties. Tough to say no to a party which included old friends.

It was a difficult year in the vineyard, not even counting the lack of attention that occurred sometimes.

Our normal budbreak comes in the first week or two of April, and 2016 was no exception. Our Seyval Blancs, Cabernet Franc, and to some extent our Petit Verdot all responded on cue.The downside to this was that we received a couple of killer frosts shortly thereafter. We saw the browning of the buds, but we really didn't know the total extent of the damage until we harvested. 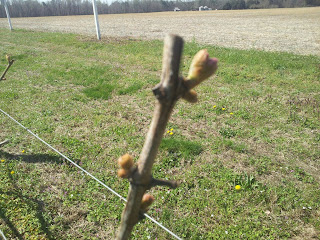 If there is a positive slant to this agonizing loss, it was that the vines have a tendency to over produce additional basal buds and "buds of questionable origin" that will allow us to better balance our fruit growth in the following season. But that is then and this is now. Upon harvest we found that all the substitute growth didn't really help to deter the loss of yield. We easily had a 50% reduction in output when compared to the prior year. This certainly is a bummer but it is a problem more visible 6 months to a year from now when we go looking for the grape juices that eventually lead to bottled wine. There is a commodity market for grapes we can tap into if we need to, but it is better to draw from one's own inventory.

Summer went along as expected, though we had more than our fair share of rain. And rain in an established vineyard is an unnecessary evil. Established vines have a very deep root system, so they can get all the water they need from down under. Besides, we have irrigation set up so we can supplement water via  this way should we need to.

As Fall approached, we went in to our normal routines, if there is such a thing. When grapes are ready they have to be picked. High humidity generally brings on the molds that are detrimental to producing good grapes. Molds love sugar just as people do, so if a fungus starts to take hold it is only a matter of days before the damage becomes too much. For the most part we stayed ahead of it. You can tell by the number of bee bites you get while picking. Healthy fruit has very little sugar seepage, and wasps and bees tend to not bother you. Once grapes start to pop, whether it be from expanding too fast (caused by rains) rupturing the skin, or by molds attacking the grape and making it soft and oozy, swarms of yellow jackets compete for the sweet fruit.

But it wouldn't be Fall in Virginia if we didn't have to worry about hurricanes coming up the east coast, or swarming in from the Florida panhandle. Hurricane Matthew was the Hurricane this year to contend with. We watched it as it approached from the south and then taking a customary turn up the coast. You see the maps drawn by the weather forecasters that include as many as 15 computer-derived models for likely hurricane paths....all had them getting up to the Carolinas before it turned out to sea. This may seem like a good thing, and I suppose it was, but the winds and rains that reach out from the center path of travel are just as concerning.

OK, we're fine with this. It happens nearly every year so it is no surprise. So let's throw in a twist here. My older son Chris decided to get married during the hurricane season. October 8th. Which overlapped with harvest time. And get married here, in Virginia....at the winery. Hmmmm. If you want to talk about priorities shifting, this is a key example.

As much as Chris did most of the planning and work putting together this wedding, and he really did do nearly all the work, vineyard attention was diminished.  We hurried the best we could to pull in all the grapes still on the vines, but we fell significantly short of the job that needed to be done. When the significant day arrived, we hadn't even touched the Scuppernongs, which normally are picked throughout October anyway as they slowly ripen, and we left half of the Nortons still on the vine. Our Cabernet Sauvignon was also ignored, but we didn't expect a big crop of those anyway.

The Nortons took a major beating in the hurricane, while the Scuppernongs were relatively unscathed.

But oh, what a wedding !