Matthew, Marriage, and Motherhood: Part One 2016 in Review

2016 is coming to a close, and it has been anything but typical. I have refrained from doing the typical slogging through the season. Enough with weed killing, pruning, leaf pulling and harvest. This has been a year of "Firsts", and just doing anything the first time takes a great deal of effort and time. So much so that writing a blog is of  "C" level priority, which I am now finding a little time to devote to it.

I am going to split these end of season entries into several sections. Maybe it's because I have these flashes of ADD which won't allow me to sit long enough to bang out a full length review of the year. Maybe it's because if I give you 10 pages of updates it might put you to sleep.

In one of my previous posts I mentioned the new winery building. Well, it finally was completed and we had our Grand Opening in mid-April. We had a soft opening back in November, nearly a year ago. Then we didn't have electricity (we used a  generator for the lighting), and we didn't have bathrooms (bless the invention of porta-potties, though they are what they are). We were able to start selling before the holiday season. What was good about this timing wasn't necessarily finally creating some sales. It was able to get us thinking seriously about the marketing and just get the basic operational flow going without the massive surge we expected 6 months from then. It also put a candle under the butt of the builder to show that this is not a project he should retire on. 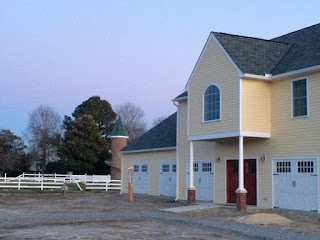 One thing I want to point out here is that having an official winery building does not bring back flashbacks of Kevin Costner in 1989 movie Field of Dreams. Do you remember the phrase: "If you build it, they will come"?  Well, this may be true for the Grand Opening, and it was even true for the absolute bust of a Balloon Festival we had. But once the novelty wears off, there is a never-ending challenge of attracting people to a rural winery.

Sure, compared to other wineries that seem to be spread out but still attract visitors, ours is an island in the middle of a rather rural, and what seems to be an isolated agricultural community. Until recently there were few other venues that brought visitors in from adjacent communities. A river on the north seems to be an insurmountable wall preventing people coming in from Williamsburg. And the county to our east looks at Surry County as the equivalent to the wild west, where GPS directions bring visitors in via rural, barely 2-lane roads that weave and bob so much they wonder if they will end up in Kansas.

Let's face it, there are just so many tastings the locals can attend, and though our wines are very good (visit our Facebook page for comments), they reflect the pricing of a micro-winery, not a high-volume operation that can send pricing spiraling downward due to immense economies of scale. Someday that'll be us, but not now. So we are going, and will probably continue to be going through our marketing plan to constantly make revisions to see what works best in attracting customers from "far away lands".

What we have found is that for those that have ventured so far to have found us, they love the quiet setting, the fantastic employees we have working for us, the wines, and the design of the new building. Oh, and don't forget the goat tower!

Posted by Dave at the Vineyard at 5:43 AM