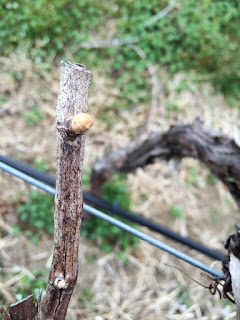 I have been reminded by both the happenings in the vineyard and by blog readers that it is time once again to keep everyone informed about the vineyard, and of course the new winery. There has been  a lot that has happened during the 5 month hiatus.

Bud break this year has already occurred. When Rich sent this picture it was only March 14th, a full 3 1/2 weeks ahead of when buds burst open last year on April 10th. It happened in the Seyval Blanc, and so far the other varieties are their normal laggards showing only signs of "fuzzy" buds. Rich has been more diligent than me in the vineyard. He has been working rather hard, and putting in some long hours, trying to get the vineyard ready for this year's action. He has completed most of the pruning, and has even moved over to prune the Norton grapes which I ordinarily do. My time is spread fairly thin with the winery and all. Though I have been able to finish pruning the Scuppernongs, I have spent very little time even thinking about the other vineyard. So it is good that Rich has made it his priority.

The winery work has been mostly inside during the winter months. Though I have been watching over the progress, pictures and descriptions explaining walls without drywall, walls with drywall, are a rather boring way to describe progress. A portion of the building was completed so that we could open up the tasting bar and gift shop just prior to Thanksgiving. It was like pulling teeth with the contractor to get this far. We still didn't have heat, and our lights were run off a generator. A porta-potty was all we could offer at this point since the bathrooms weren't completed. It was a tough few months, but our customers recognized our situation and enjoyed our wines anyway.

For the most part the winery is completed. We still have some "issues" which hopefully will be worked out in the next week or so. They better be, since our Grand Opening is Saturday April 16th.

We had a new member join our herd. A baby bull was born September 21st. Don't get me going on the advantages of using sexed semen; it obviously didn't work this time around. All of our cows (4 in all) have been artificially inseminated and are all due this coming September, so we'll see how that goes. I have decided to raise the baby bull and trade it for another bull in about 12 months. If I don't it'll be trying to ride its mother and sister and in-breeding isn't my idea of expanding the herd. 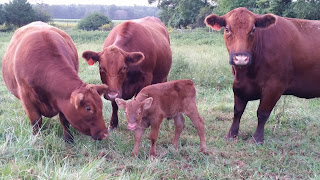 Lastly, for those that were watching this strange structure be built, here is a picture of the final product.

It is the world's tallest goat tower ! Goats coming next week.
Posted by Dave at the Vineyard at 4:34 PM