There seems to be no end to the amount of wood being put into this building. Trucks come in, each with their own tail-end forklift, to pull off and position mounds and mounds of wood. Pallets of panels, skids of pressure-treated lumber, 4" x 4"'s, 2" x 4"'s, rolls of Tyvek, and beams so big one person cannot lift even one end off the ground.

A crew comes in on a Friday, 12 or 13 in all, and before you know it a building is taking shape by the hands of a well-orchestrated crew. The average height of these workers cannot be more than 5' tall. They may be short in height, but proportionally all have the strength of gorillas. One person will "grab" seven or eight 2" x 4" x 12"'s and place on his shoulder to move it into position, all without skipping a beat. Their workplace language is American-Spanish.....for every 5 words of Spanish there is an English word thrown in that has no translation other than it meets specifications on a drawing. They work from sun up to sun down, taking only a short siesta around lunchtime. Coconut milk and water are the refreshing drinks of choice. Very few of them hold a hammer.....pneumatic air guns and Skil saws are the noise making implements on the work site.

In less than a week the walls are up and the roof is on. The roof is mostly made up of a series of pre-made trusses, designed and built off site and then within just a couple of hours put in place by a crane as workers nail in position. Where trusses weren't located, rafters, beams  & joists were built on location by these agile workers. From the start of the walls to this part of the assembly took only one week. 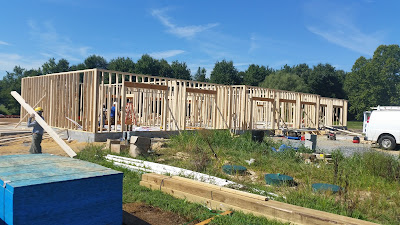 As you look at the picture, you will see what appears to be seven doors in the front part of the building. As I may have explained earlier, the building is being built using a classic carriage house design. The seven doors represent the seven carriage ports, however only the center one is actually a usable door. The others are faux doors because they really just provide a decorative front for the building, with actual working walls on the inside of the building. The two on the left are where the bottle room and rest rooms will be, while the 2 on the far right are on the north wall of the gift shop. 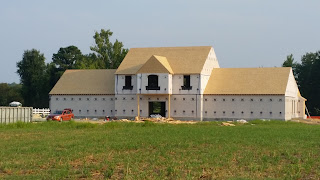 In this later view you will see the new Visitor's Center starting to take shape. It is no longer just a 2-dimensional building on a set of architectural plans. The walls have been covered with Tyvek, and the roof is waiting for the roofers to come in and staple on tar paper, followed by the roof shingles.

When it is completed it will be over 6000 square feet, with the downstairs being open to the public (less the bottle storage room of course), while the upstairs will house Diane's office, along with a conference room,several other offices and a kitchenette. It is now time to get super serious as to how the inside will be laid out......the tasting bar, the gift shop, the display area, and the function room with its fireplace for those cooler evenings.
Posted by Dave at the Vineyard at 6:50 PM