Other things goin' on

Certainly the building of the new Visitor's Center has taken a lot of attention lately, but there are other parts  of the farm that are moving right along as we enter the fall.

After nearly nine month's of pruning, leaf pulling, spraying, and shoot positioning, not to mention weed wacking, trellis repair, planting, and fertilizing, we are once again entering harvest season. If you thought that the day to day field work was exhausting, try picking and processing grapes. For our first harvest of the season, the picking of our Seyval Blanc grapes, we solicited the help of eighteen volunteers. Compared to last year when we had only six people cutting off the full bunches, we thought 18 was ample. 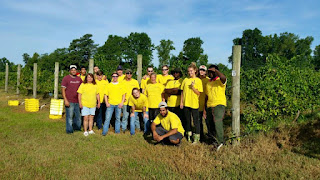 But after an entire day of picking, beginning at 7 a.m. and going right through to 4 p.m., there were still 3+ rows to do. Five pickers returned the next day, tired bodies and hands all, to spend nearly another full day wrapping up less than an acre of white wine grapes.

And after picking into the bright yellow lugs, the grapes needed to be brought back and processed. Crushed, destemmed, and then sent through a bladder press, and ultimately moved to the stainless steel tanks where they sit for a day or two as we allow some of the solids to settle out prior to initiating fermentation.

The time and energy spent throughout the season had its rewards. We harvested 11,421 pounds of grapes which resulted in 2500 liters of liquid gold.

We still have six more varieties to pick. Though we expect great yields from our Cabernet Franc, Petit Verdot, and our Norton, none will match that of the Seyval Blanc. Fortunately, these will be picked throughout the balance of August and well into September, as we let the Brix levels rise in the absence of rain, but with plenty of sunlight to enrichen the flesh of the grape. Our Scuppernongs are not likely to be fully picked until sometime in October.

There are other parts of the farm too. We expect 2 new calves to be born in the third week of September, and though they will most likely be drinking their mother's milk for a half dozen months or so, we need to consider making sure they have enough raw food to get them through the winter. This year we harvested the front field of its Fall Panicum grasses, getting it cut, teddered and roll baled for feeding to begin in and around December. 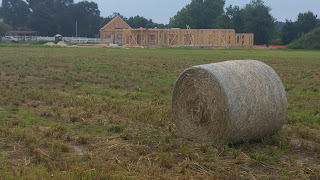 Posted by Dave at the Vineyard at 2:52 PM