Venison - On and off the hoof

One of the more frequent questions we get in the winery is if we are bothered by the deer in the vineyard. My quick answer is generally no, because we allow local hunters to use our land, free of charge, to keep the herds under control. It is a win-win for both of us. Yes, we do have problems with grackles, and lately turkeys have managed to increase in population for us to see where they were able to make great meals out of low-hanging fruit. But as far as deer go, we see them in the Spring when the new leaves present themselves on the vine, and the deer are just plain sick and tired of eating tree bark or whatever they can get their mouths on during the colder Winter months.

We have two vineyards here in Surry, and they are on opposite corners of the County. Up in the Bacon's Castle district, off of Route 10, we have 33 acres of mildly sloped land that is a combination of vineyard, thin forest, and row-crop land which alternates between corn and soybeans for the most part. Along one side is a meandering, shallow creek which provides some water to the land but also acts as a  pathway for wildlife that pass through from one side of Route 10 to the back of our field.

When I first starting making these hunting agreements I signed up with some recreational hunters. What this really came to mean was that they were "hunters in fashion" only, convincing their wives there is a reason for buying all the hunting gear, camo clothing and guns, not to mention an off-road 4-wheel drive truck as an accessory, but heavens forbid if they were going to wake up at 4 in the morning so they could approach a hunting blind in the cold to await passing deer. These are the guys that stopped for breakfast first, rendezvoused at the local 7-11, and then finally made it into the fields at 9:30 or 10. Needless to say, the herd wasn't thinned out by this approach.

But 3 years ago I came across 2 hunters that were serious. They act professionally regarding their sport, understand the privilege of hunting my land and have a respect for the animal they are hunting. Though when you talk to them they will always wish they had more successes than they do, especially with the time they put in setting up and waiting for game, they always walk away with a couple of deer during the season. 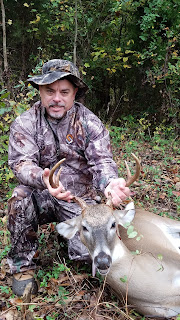 They are a nice bunch of guys to work with.

In our other field there is not quite the same opportunity for hunters, primarily because most of the acreage is either devoted to my cattle or the vineyard, leaving very little else to attend to wildlife. However, I do have a few acres that adjoins another neighbor's field, which provides the local Neighborhood Hunt Club (aptly named I might add) a place to hangout.  Hunting in Virginia also includes using dogs to flush out the deer from the wetlands, so these hunters make it a ritual to line up on one side of the trees while others send their dogs through, pushing the deer into the hands of those in waiting. Personally being from the north I don't grasp this type of hunting, but it does seem to work, especially for those hunters that want breakfast first. Chasing deer out of the swamps after they had decided to bed down during the day appears to go along with this type of daytime hunting.

I do not charge for the right to hunt my land. Some of the other farmers do lease the land to hunt clubs and individuals as a way to generate some income. As mentioned above, for me it is a no-lose proposition. All I ask in return is an occasional tenderloin (or roast) so that I can receive a little benefit from the deal.

This year I was brought a really nice piece of tenderloin, which Diane immediately delegated to me to cook. I put some time into it and the recipe can be seen on our website www.hamptonroadswinery.com/venison.html

Posted by Dave at the Vineyard at 7:35 AM