Baby, it's cold outside.

It's all about the animals.

Last night was our first snow of the season. Yea, I know. Compared to what has been happening up north, what we saw with maybe 5 inches of snow is nothing. But for us, it cripples the County and all the surrounding towns. With this amount of snow, and very few options as to how to handle it, we tend to hibernate and do the best we can. Hopefully it will melt and we can get back to normal in a few days.

The snow is one thing, but the winds are something else. We have been experiencing 15 - 20 mph winds which makes whatever snow is in the air propel itself horizontally. Need less to say, it puts a damper on our vineyard work. We can dress to stay warm if it is just the snow, but the winds make it impossible to stay out for long and brave the weather. It makes decision-making very easy though; we're going to stay indoors. Even going out to the unheated barn to work on projects doesn't sound very appealing.

But from sun up to later in the day, our minds are on the animals. This is a farm after all, and over the last couple of months our cattle herd has increased from 7 to 9, and our goat population has jumped from 3 to 7! Those following us on Facebook saw that we had 2 sets of twin kids around Halloween.
I am always concerned about babies being born in the late Fall; I suspect it is a human thing that makes me concerned about their adapting to the cold weather. It appears however that the young ones have taken the lousy weather in stride. All the goats have a fairly good fur coats on them, and the calves are running around like children seeing the snow for the first time. Let's face it, none are wondering where their next meal is coming from.....all the mothers have nice rounded udders to fill out their next meal. 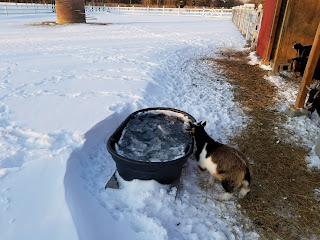 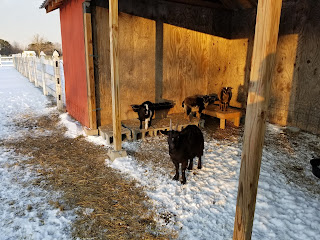 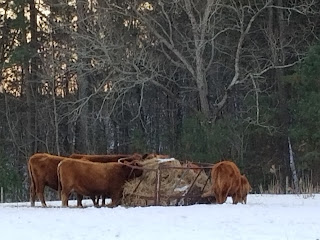 Ice troughs freeze over every night, and it is my job to go out there with a sledge to break through 2 or 3 " of hard cap. I do my best to remove the big chunks of ice without getting soaked, thinking that the surface will freeze over faster if the icebergs remain. For the goats I provide extra feed daily, since the ground is covered, and I make sure there is  fresh hay for them to chew on.

The cows on the other hand go straight to the round bales I have put out in the cribs. Their water has frozen over too, but they have access to some water inlets off the adjacent pond to meet their water needs. And they don't have a problem licking the snow. Goats on the other hand would just assume the snow didn't exist. It's funny how the dominant goat walks through the snow, from the Goat Tower to the feed shelter, while all the others try to walk in the same footsteps. I had been wondering where all 7 have been staying since every morning they have always met me at the feed bins at sun up. Well, I found out the answer this morning when it was still snowing. Adrian and her 2 are on the 2nd floor, Brittany and her 2 are on the top 4th level, and who knows where Charlene is (maybe with Brittany?). They came down later in the day only after the snow was blown off the steps.

Oh, the life of a farmer.

Posted by Dave at the Vineyard at 2:16 PM