It is December now. We have done all we can do for the 2016 season, shy of completing the 2015 bottling which we are way behind on. The vineyard lay dormant now. Though we haven't had any deep frosts this fall, we have had a few lighter ones which have led finally to complete leaf loss. Our American grapes were the holdouts as usual, hanging on to their leaves until a windy rainy day finally provided the power to blow the leaves off.

This is the 2nd season that Rich has been here to help with the pruning. He remembers that things get mighty cold in February if you wait that long to complete the pruning. He has already jumped into the Seyval Blancs to begin the process of "long pruning"; getting rid of the majority of the growth and only paying marginal attention to bud count. There still is some attention given to spur distribution, but it comes as a subconscious act instead of a planned endeavor.

Rich and I seem to communicate via psychic transfer. He leaves me the Scuppernong grapes to prune. They are a bear to cut back. For every one vine I train, he has done 4 of the French. There is just so much crazy growth in these American grapes. The vines look like vineyard anarchy in action. But if you don't train them, they will train you (into complete dismay). 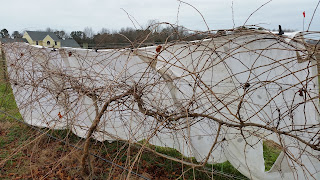 Rich tackled the Nortons (another American grape) last year and feels comfortable pruning those back. They are trained different than these Scuppernongs, using the the Geneva Double curtain trellis system.

When you first get into pruning the Scuppernong, you are trying to set up a trimming system where there isn't one readily apparent. If you look closely at the picture above, off on the right side above the rip in the cloth you see 2 clumps. Look even more closely now and you can see between the 2 clumps a couple of wires.   Basically speaking, everything above those can be cut off. One can do that once you identify the cordons (the 2 side arms), and any other long growth that should be kept if you are planning on rooting some cuttings in the Spring.

The shoots and canes are all tangled, and when you prune there is no time to be tender. Grab a shoot in your left hand, cut it to length with the shears in the right hand, and pull mightily to remove the tangled shoot from the mass. Repeat until all are trimmed to the wire....maybe 50 times.The entire vine shakes when you pull, and unfortunately there may be another shoot you wanted to keep that was torn off by the impatience and lack of care in the pruning process. But if you are careful to the nth degree, you can easily spend an hour on just one vine. As it is, this one took 20 minutes.

What I have described is "long pruning". We purposely worry less about final bud count or spar dispersion. Those are concerns we worry about during the 2nd pruning in March. This is when we go back and make sure spars (what is left of the cut shoots) are spread out among the 2 cordons, and that these spars are left with 4 to 6 buds. It is a counting game, but with practice  it moves along.

In the spring Hampton Roads Vineyard & Winery will be holding a series of seminars. The Vineyard will be having 3 sessions that are titled: "So you want to be a wine grower", which will include the basics to put together a commercial vineyard, a thorough pruning session, and lastly a Business Plan for establishing a vineyard.  Right now there are 30% fewer vineyards in Virginia than are needed to support the growing number of wineries. Anyone wanting to attend should drop me an email (DSheldon23883@gmail.com)so I can send out the registration form. Point of note: there is a fee and limited seating. The Winery will be providing seminars for the aptly titled "So you want to be a winemaker", that will cover the basics of wine making, offer tasting and blending sessions, and hopefully get involved in the actual bottling process. Watch our website for details.