Just a One Bull Town 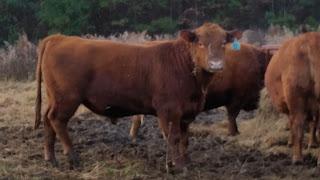 For those of you that follow my blogs, if there is any conclusion you come to, it's that none of my lessons have come to me the easy way. And increasing the size of my herd is one of them.

If you travel back in time I had to ditch 2 of the cows with their new calves because they were killing me with their nightly escapes through the fence. There weren't holes in the fence. The fences were't collapsing for any reason. They were 4-wire fences that were tightly built. Cows didn't care. Every night they would go over to this one particular spot....do a body slam, and off the entire herd (8 cows and calves by this time), traveling the back way 1 1/2 miles until they "joined" another herd of cows in another farmer's field. Sound travels easily in the flat lands, and my cows knew where their fellow bovines were. The grass had to be greener over there, right?

So in this business you trade off trouble makers or lack of sleep and stress will kill you. Moving them to someone else's herd isn't sending them trouble, because the herd dynamics in the new location, not to mention the scenery, is different and it quickly eliminates their escape instinct.

The following year I was now down to 2 cows and 2 heifers (their female calves). I had them all  A.I.'d, but only one out of 4 took. Talk about bad odds. And the one that took gave me a bull calf. Geez.......and this was using sexed semen which was to have given me an 85% chance of getting a female calf. Where are the statistical odds when you need them to  work in your favor?

I watched the bull grow, and fortunately I was able to trade it off for another bull from a farmer located one county over. He also has Red Angus.....400 of them! Didn't feel like line-breeding my stock, which is what they call a son being allowed to impregnate it's mother and sisters who happen to be near by. My new bull is tagged #11.

The following year I did the A.I. thing again. Even had the Vet come back and confirm that all 4 were pregnant. He used the ole "hand up the you know what" method instead of his Ultrasound machine. He said they were all pregnant, but once again the touchy-feely method had it's flaws. Only my 2 new cows provided calves; the 2 oldest cows didn't take. Don't know what the Vet felt, but it wasn't a 1st trimester calf in these two instances.

If you've been keeping count, I now have 7 cattle: 2 older cows, 2 new mommas, 2 heifer calves (thank heavens sexed semen worked this time), and a bull. Recognizing I purchased my original 4 cows in December 2012, we are now 4 year's later and I haven't quite gotten my head count to where I started. So easy.....I think not. 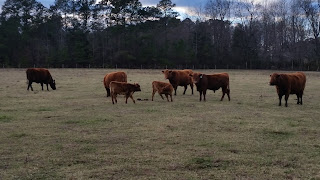 Now let's see if the bull has better results than semen in a straw!

Posted by Dave at the Vineyard at 2:12 PM