The Underground - Building the Winery: Part 7

Sometimes what you don't see can be very important. No, I'm not talking about the septic system which managed to rear its ugly head by having 7 silos pop above ground over the holding tanks. I'm talking about electrical power.

Dominion Power has a program which analyzes neighborhoods, and particularly residences, to determine if there is a high chance of hurricane damage to the elevated power lines that are suspended up on the poles. The theory is that if they provide some preemptive action to these locations, they then can avert a potential electrical outage should a major storm pass through. Our winery / farm location was identified as one of these sources of potential trouble.

So one of their engineers approached me to discuss their program. Nice guy this "Steve" (whose last name will be omitted to protect his identity), who must have had some human resource training along with his years of practical knowledge about power lines. He said all the right things.....like "you won't have any trees taking down your power lines" (there was only one along 800' of line), to "it'll remove an eyesore from your future winery view" to "we can do it all without destroying your lawn".

This has apparently been a program going on for some time. It just shows you that there must be some extra money in the till for them to worry about the future like this. In further discussions with Steve, he shared with me a common attitude that this program allows Dominion Power to be in control of an ever-increasing amount of real estate, for to have them come in and bury power lines, they require a right-of-way that measures some 15' wide for the length of the line. You do this often enough, they tend to become a major land-owner in the State, though technically they don't own the land, but they do control it.

For the most part I didn't have to give up too many rights regarding the parcel sectioned off. Yes, I can still put a fence over the top of it. I just can't put a shed or something that might be considered a permanent structure that might hinder future repairs over the line. But that's the trade-off, isn't it? And let's be honest, where the line is being dropped it wasn't really in a touchy part of the property. It managed to follow along one side of the property line, much like an "Invisible Fence" might. 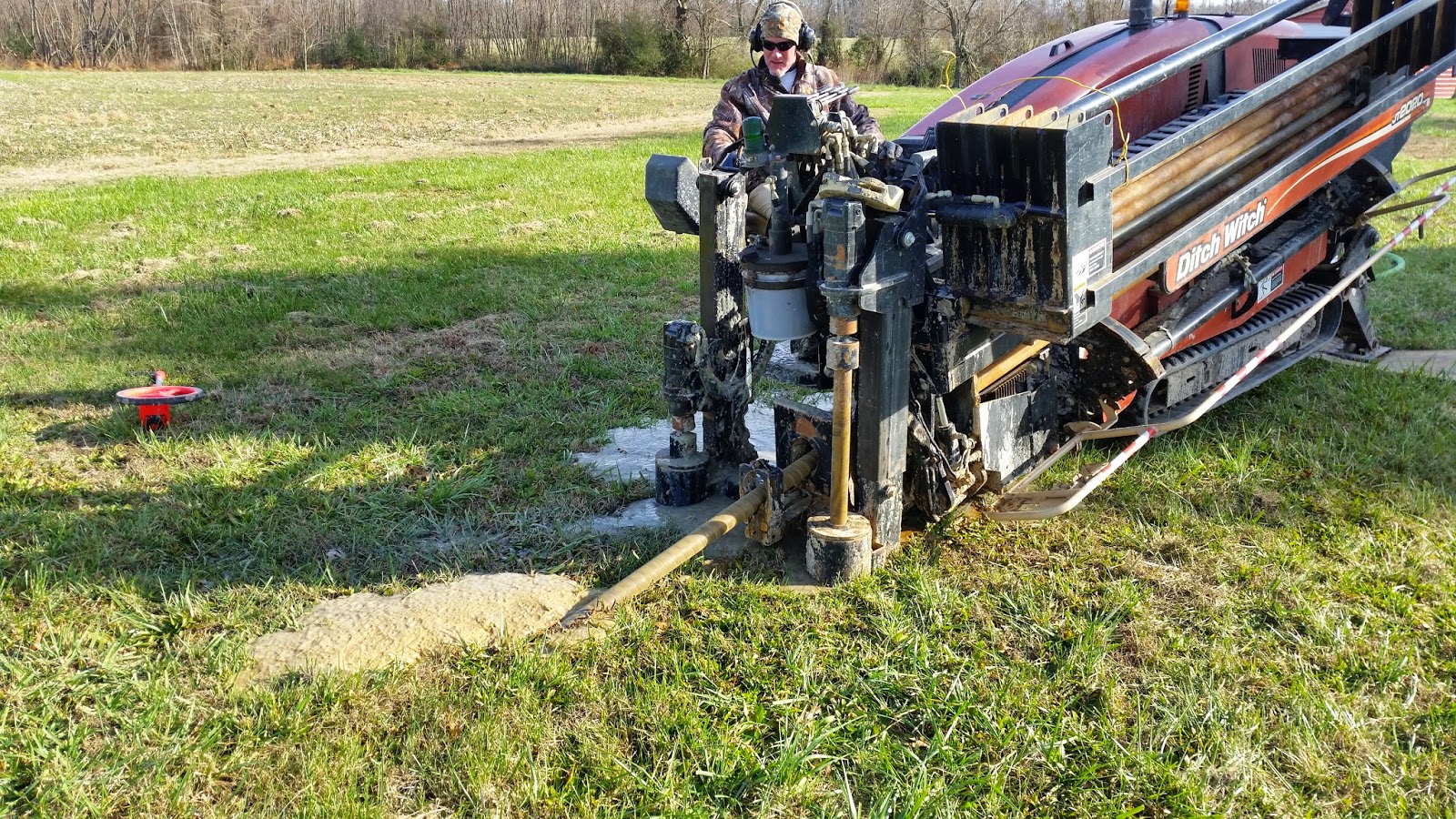 For those that think a Ditch Witch is just a piece of machinery you rent at Home Depot, you must expand your understanding. Ditch Witch is a company and a brand name that includes all sorts of earth construction equipment. The one that was used on our project was a Model JT2020 Directional Drill (seen above). Using an 85 hp engine, it rotated and push-drilled lengths of pipe, I'm guessing maybe 2 1/2" in diameter x 10' long, into the ground  to a depth of 4'. At the forward end of the lead pipe there was a deflector of sorts that the operator could maneuver back at the control box that would allow it to steer up or down, left or right. With an electronic guidance system that sort of resembles a parking meter, another operator would hold it upright a hundred feet or so away to determine the "flight path" of the underground piping. The guidance system would send radio waves into the ground that the main control panel would pick up on and allow for a directional adjustment.

Once the pipe popped out into a previously dug splicing pit, a roll of wire would be attached and the pipe would then be pulled back into the rig. This particular directional drill machine held 300' of piping that had a pulling power of 20,000 pounds in order to return the pipe to its docking carriage and yank the wire through the 300' cavity.

All in all, it took a crew of four an entire day to perform this task, and nearly a day for a 3-truck Dominion crew to detach the above-ground wires, hook-up the feeds to a new pad transformer , remove the old poles, and  clean up the site.

All did a great job. They barely left a trace other than a picket fence that had to be put back in place; oh, I had to reset all the blinking alarm clocks in the house too.

Posted by Dave at the Vineyard at 4:17 AM