Alright, the title of this blog grabbed your attention and now I have to explain myself. The fact is that it is that time of year again when I have to think about adding to the herd, and the best way to do it is by applying artificial insemination to my cows. Nine months later: POOF, I have a calf.

Much like people there is a best time of the month to enter the butt end of a cow and place a sperm sample for insemination. So for the last several days I have been walking among the herd and watching the cow's behavior looking for signs that they are entering their heat cycles and will soon be in standing heat. But there is a lot of prep work in order to get to this point which I'll explain in a minute.

I talk to my 93 year old Father once a week, and when I shared with him my activities during the past week, he asked if I thought about this aspect of farming while I was in engineering school 45 years ago. Who would have guessed; I thought about sex, just not animal sex.

I have registered Red Angus cows and heifers. My business plan is to build up a herd of these cattle and eventually offer cuts of meat from them in a cafe associated with the winery. It will be beef that I had total control over, from birth to slaughter, being grass fed without the use of growth hormones, and that meet or exceed the Beef Quality Assurance guidelines. The small herd I have now are the beginnings of my breeding herd, and I am trying to put together good, solid, and healthy stock that have the best EPD's (Expected Progeny Data) that support this endeavor. EPD's are today's answer to the Big T, little t genetic traits we learned about in high school biology. EPD's may include characteristics such as calving ease, feed efficiency, docile mood, weight to carcass ratio, or marbling. There are 12 traits to consider.   In order to get the ones I want, one has to match a cow with a bull that shares these desired traits. You can always buy a prize bull for $20,000 to $30,000, but unfortunately after just a couple of years this bull can no longer be used in the same herd or it will be jacking its daughters. Also, by using a single bull, there is no guarantee you'll get just daughters.....you might get bulls too.

Which brings into the discussion sexed semen. There are dozens and dozens of prize bulls out on the market, each with their own special EPD data that I can use to match with my cows. And once you identify the best bull for breeding, one can purchase sexed semen that provides maybe an 85% chance of it breeding females . This is an important feature for rapidly expanding one's herd: to constantly bring on more females.

So now that I have found the best semen for the desired traits, and then had it shipped to the Vets for nitrogen storage, the next thing to do is to coordinate all the cows to have similar estrogen cycles. Why is this important? For one thing, I don't want to have all my cows cycling at different times. I don't have 30 days to watch over each of them to understand their heat cycles. Also, my Vet needs adhere to a plan too, without knowing when I would need him to perform A.I. would really mess up his schedule. Hey, how often do you hear about a doctor wanting to stimulate a birth so it doesn't get in the way of his golf game on Saturday? Same thing, but here the Vet is involved in the insemination, not the birth. Lastly, knowing that all the calves are going to be born on or about the same day will allow me to monitor the pregnant cows in late September (after harvest) and if there are any complications I can spot them quickly for corrective action. Just a few days ago on Wednesday my Vet came in and gave the 2 cows a shot to stimulate their estrogen cycle; by each of them getting a shot at the same time they both should come into heat within the next 3 to 5 days. 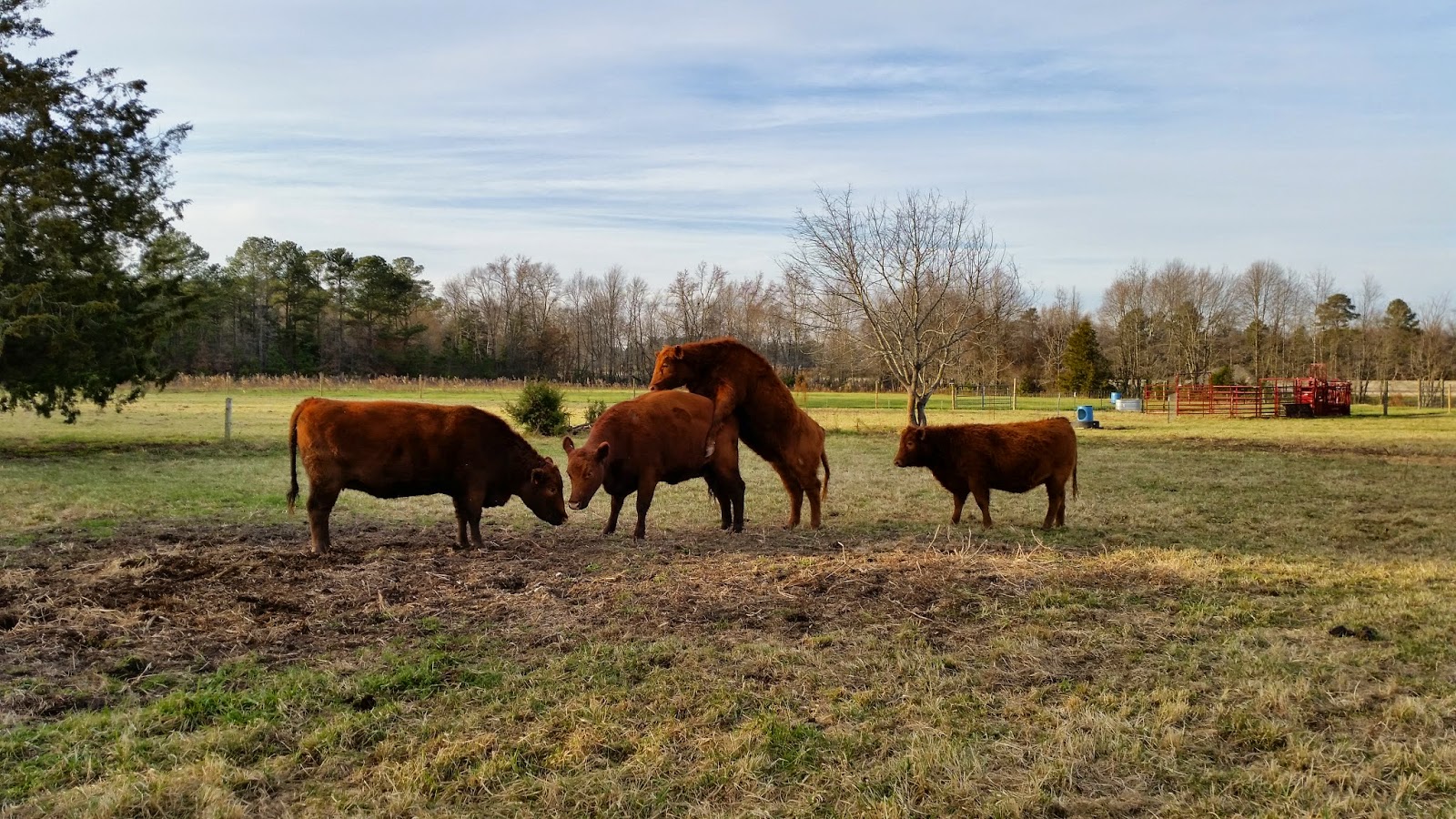 That's right, female on female. But that's not the point. The bottom cow is in standing heat (i.e. they stand still while they are ridden by another cow, heifer, steer, or bull) and this is the best time to inject them with the bull semen. Unlike mares where there is a 4 - 5 day window to get this done, with cows we only have 12 hours or we lose our window of opportunity. I gave the Vet a call and we scheduled a rendezvous for the next day, Sunday. There is no rest for the wicked.

There is still frost on the ground when the Vet shows up the next morning. I had already done my mandatory chore of getting the four cattle in the pen adjacent to the sweep pen and the squeeze chute. Our first job was to get the two cows that were to be bred into the chute leading to the squeeze pen, and with just a little prodding we were able to get them headed in the right direction. X406 was the first in line, and she was the one observed the previous night in standing heat. My job was to lock the head into position.....no cow with a hand up its butt will stand still on their own and let the Vet perform his duty. A squeeze pen is a necessity to control a 2000 pound animal. 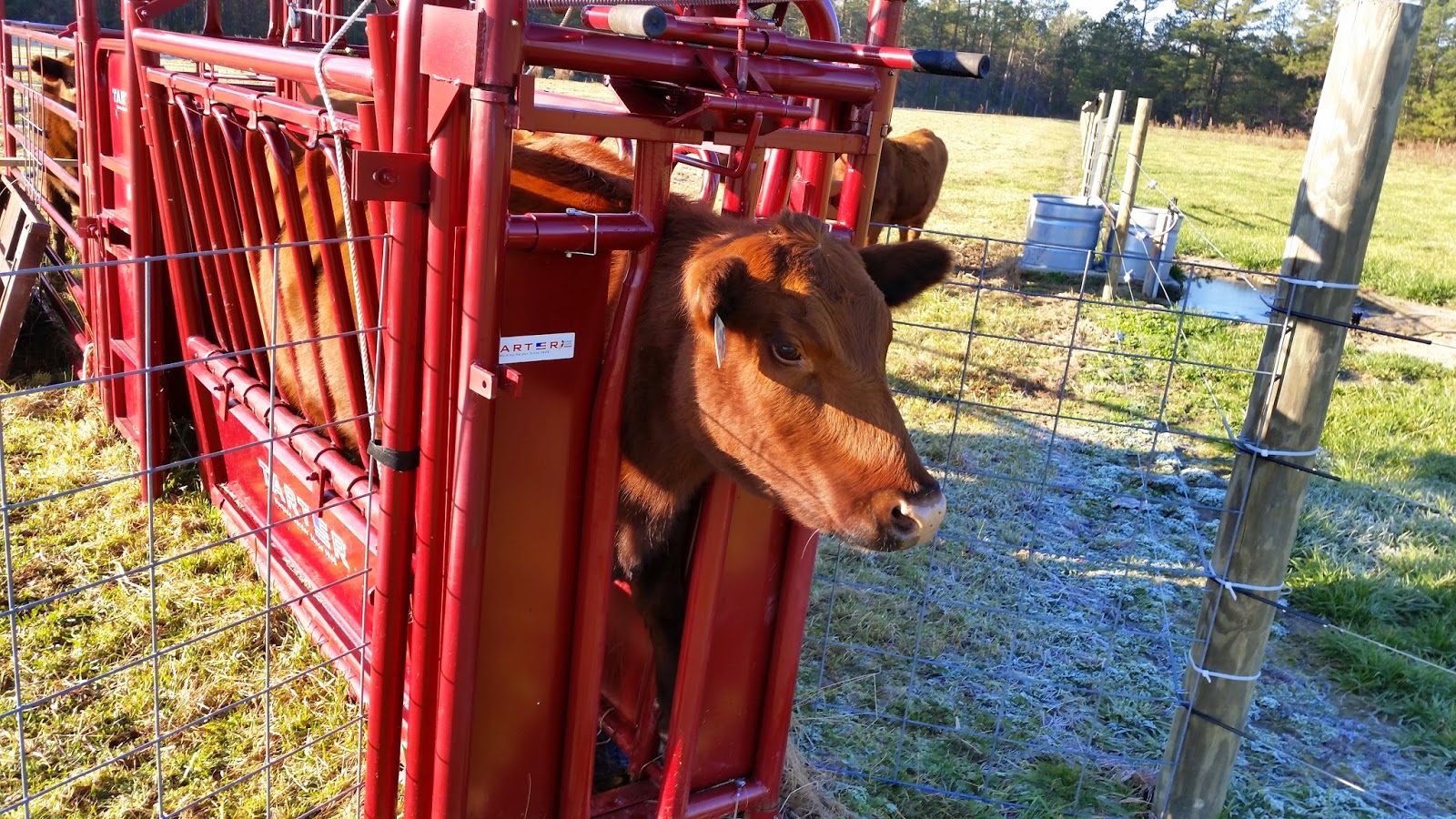 With a glove on his right hand which extends all the way up to his shoulder, the Vet reached in and felt the inner workings of X406. Everything was in place and sized accordingly. He confirmed she was in heat and proceeded to take a straw of semen and insert it into the uterus for dispersal. Wam. Bang. The job was done in just a few minutes. The Vet's arm must have been warm; the cow never put up a fuss.

Now onto X446. This was the other cow that received an estrogen cycle shot but so far had not shown any signs of heat. That was no excuse however to avoid the tender hand of the Vet. After I opened the head gate and allowed X406 to leave and join the 2 heifers who were eating grass within her view, X446 was prodded into the squeeze chute and I proceeded to close the gate to restrain her. She wasn't happy but she recognized her predicament and took it in stride. The Vet then repeated his prior actions, but this time he was exploring more to see what her inner activity was. He concurred she was well into her cycle, but not quite ready. Tomorrow would be the likely day and I should just be vigilant in my observations in order to spot her in standing heat and be ready for her being artificially inseminated.

This story was certainly more than you bargained for. Ah, life on a farm.

Now the big question is whether we were successful or not. Ultrasound can't be performed for 25 days, but before that time the cows may or may not go into their ordinary heat cycle. If I don't see them perform in 21 days, "we" are good to go. January 4th and 5th will be the telling days. If all is well, the new calves will be warming in the sunshine of mid-September.