The basic process for putting in a building pad is to first scrape off the topsoil, going down maybe 12 to 18", grading the area, and then back-filling with a compact-able sand soil mix. Seems simple enough. So the contractor who had put in our service road (see prior blog entry) proceeded to drive the blade of his bull dozer into the earth and push dirt out of the way. 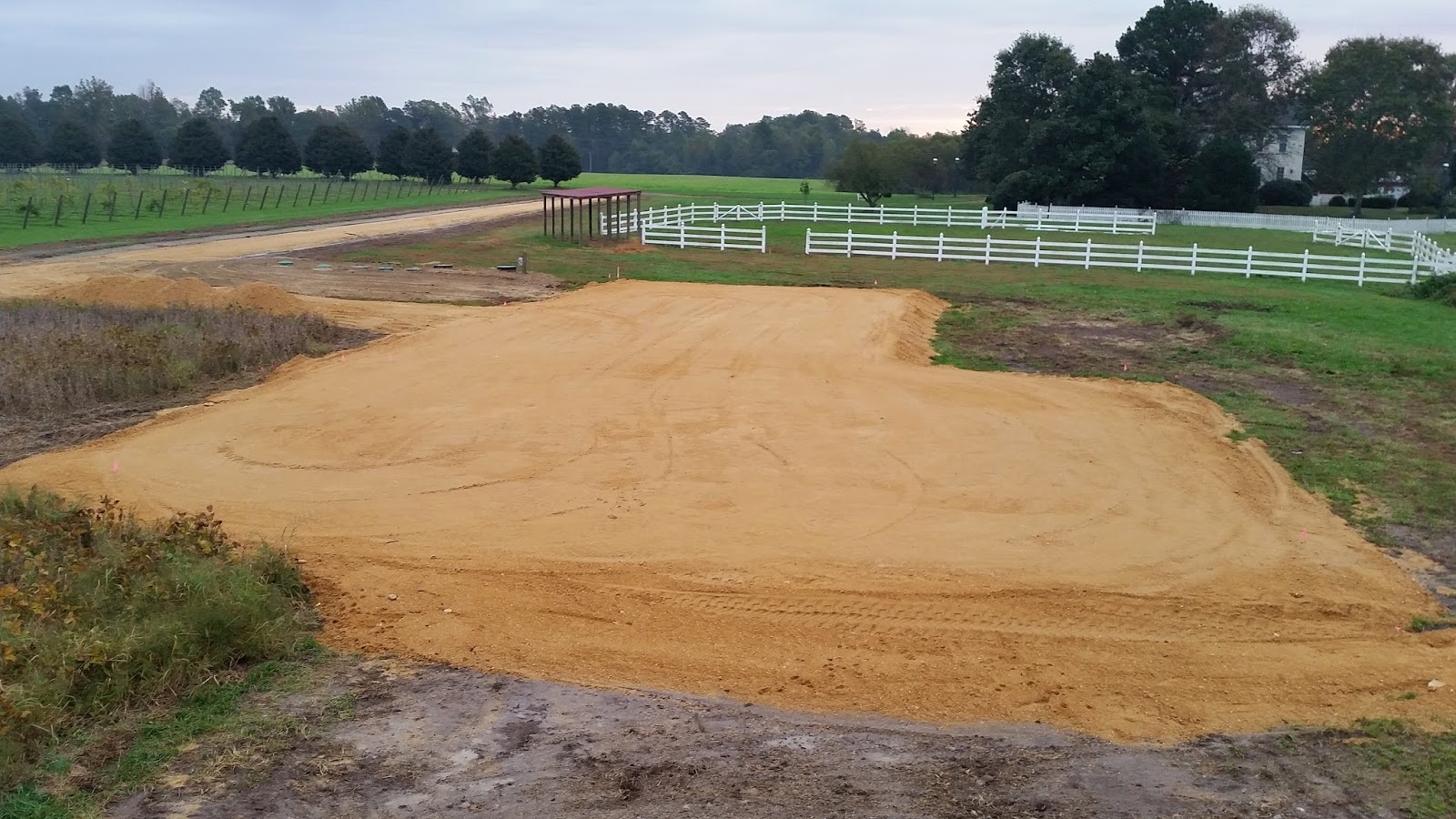 The corners of the building were staked out with those little tiny red plastic flags. They were like the ones you see when someone surrounds their property warning they just put up Electric Fence for their dog. Nothing really sophisticated about it, other than we had a surveyor come in and verify their location. I wanted the building to run parallel with the roadway we just had put in, which runs in a perfect east to west direction. It'll mean our front door will aim true north, and the rear of the building will face true south, which will be ideal for when we eventually install solar panels on the back roof.

A good machine operator can get the dug out plane to within an inch or so in variance over the 5000 square foot area, an accomplishment only achieved through years of practice and a drive towards perfection. He didn't need all the new fangled monitoring devices found in the newer dozers......he could tell how he was doing by the "feel" of his treads as he slowly moved back and forth. And if there was a mushy area he felt that too, as his 18 ton machine dipped ever so slightly while moving from one end to the other.

As with many contracts and quotes, there is the always present escape clause or fine print that a contractor uses to resolve unforeseen things, and not really knowing what one will find below the surface of the soil is reason to have wording that covers the contractor if a surprise is found while excavating. Wouldn't ya know it that after he dug out the required depth, a quick walk around on the newly graded surface inspecting suspect areas pointed to a major problem which he quickly shared with me.

There was this one area, maybe 20' x 50', that felt like you were walking on a trampoline. The ground, seemingly hard on the surface, floated under your feet as you walked on it.So a person of less than 200 pounds made the ground seem wishy-washy. This wouldn't bode well if you poured a slab on top of it and then added a building on top of that. Though the slab might hold true, eventually it would crack under the weight stress and then cause a nightmare in the integrity of the the structure.

The apparent cause for this is that soil has a skeletal structure, with pores filled with air or water. Normally this isn't a big deal, however when something of massive weight is put on it this honeycomb structure is compromised and collapsed. It is best to have a solid base to work on and not depend on the massive weight of a building to be uniformly dispersed throughout the footprint. The mushiness we felt was the sponge-like nature of our soils, where my weight was just moving the water around that was within these pores. There are two real choices one can choose from to resolve this new found problem. One is to wait it out and let the water table drop, and then compact the region and put in some additional fill. That wasn't likely to happen since we are entering our wet season here and the soil wasn't going to dry out any time soon. The other option is to dig it out and hopefully we can find the extremes of this soft spot, get out all of the weak earth, and then back fill once again. We had to go with option #2.

But this required bringing in the excavator, for the bulldozer is not meant to remove specific chunks of earth out. So the next day the contractor brought in another massive machine (same one he used on clearing the edge of the pond) and proceeded to dig down until he hit solid ground. When he was done digging, much like a dentist performing a cavity removal in a rear molar, he had made a mound of dirt 3 stories high. He had successfully identified the weak spot and removed all the weak soil that was doing the shifting. It was now time to back fill, and back fill, and then still more back filling.

When the project was "finished", 38 dump trucks of fill were brought in, along with another 27 dump trailers of sandy fill. To put this another way, a dump truck holds about 20,000 pounds of fill, which at about a ton a cubic yard comes to about 10 yards of material. The dump trailer each holds about triple this, or 30 tons of fill. Certainly makes you want to reconsider suddenly jumping in front of one of these vehicles on the highway ! So all in all we had 1190 tons of fill put into our front roadway and building pad. This equals over 2 million pounds of fill that would equate to having a 9" layer of sand put on an acre of land.

We are now ready to go onto Part 5 of Winery Building, installing the septic system. This is needed to be done sooner than later in order to jump ahead of the rainy season and to know where drains need to be roughed in before we pour the concrete foundation. We must hurry; it is the middle of October.