There is a lot that needs to be done before the first nail is pounded into the first 2 x 4 that is to be part of the building framing. Previous posts talked about laying out the footprint of the building and performing soil tests in and around that area to determine locations for a well and the septic field. Those decisions have been made and now it is a race to get certain things in place before the rainy season comes upon us. Normally by now we have had a threat or two by hurricanes coming up the east coast. Not this year however. And then there is the winter season, but with us being near the shore we are likely to get more rain than snow.

Big heavy equipment do not like wet earth. You may think that if the ground is rock solid during the summer, than how soft can it get with just a little rain ? It gets more mushy than you can imagine, and even a bulldozer, an excavator, or heavily laden trucks can get mired down and need assistance to be moved. Which is the reason why we have to think of an access road being put in place before anything else gets started.

All is not for wasted however; the road that is to be put in will be resurfaced later to become the one-way road in to the Visitor's Center ( aka Winery Building). There is very little of it that will have to be removed in the final tweaking of the design before we invite the general public in. The idea is to have the vehicles enter from our county road, driving up an entrance lined by huge Magnolia trees on each side, and then after bearing right passing in front of 45 rows of grapevines before they are then introduced to the new building, a Carriage House that will be the home for our new Winery. 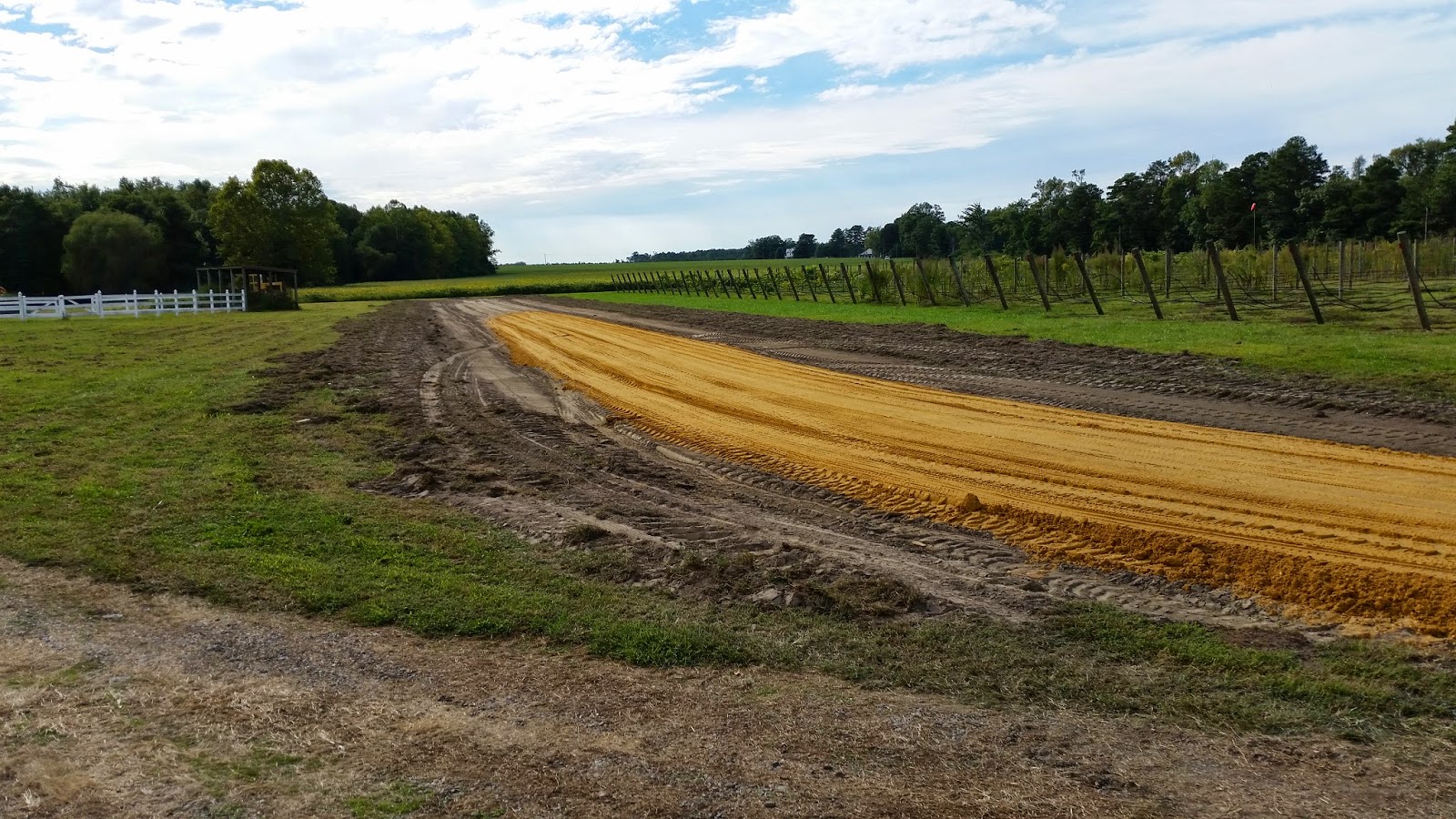 I call it "Runway 27". For the pilots out there it makes perfect sense. Running perpendicular to the grapevine rows, which face a perfect North-South, this roadway will then be in an East-West direction. With its one-way operation, a car enters this road facing true west, or 270 degrees. Pilots would make note that it is not a magnetic orientation which is what normally dictates runway number assignments, but I beg for their forgiveness here.  So runways are named after their heading, dropping the final digit. Acronyms and the use of abbreviations seem to be synonymous with aeronautics.

This road will eventually exceed 1000' in length as it passes by the Visitor's Center, parking lot, and eventually back out to the road. It will be straight as a bullet, and will , as time allows for further planting, be bordered by maybe another 100 rows or more of grapevines.

I do not necessarily recommend that this road be used by general aviation planes however. It will be only 15' wide or so and have a slight crown in it for water run off. It will have drainage ditches on each side to control water flow from the road as well as the huge amount of water that needs to find a way to run off the fields in heavy rains. And remember, just off to the right on the north side of the road there are all these vineyard posts.....one every 9'. A slight cross wind would certainly make landing a plane here a real challenge. But then, versus crashing, it might not be a bad choice !