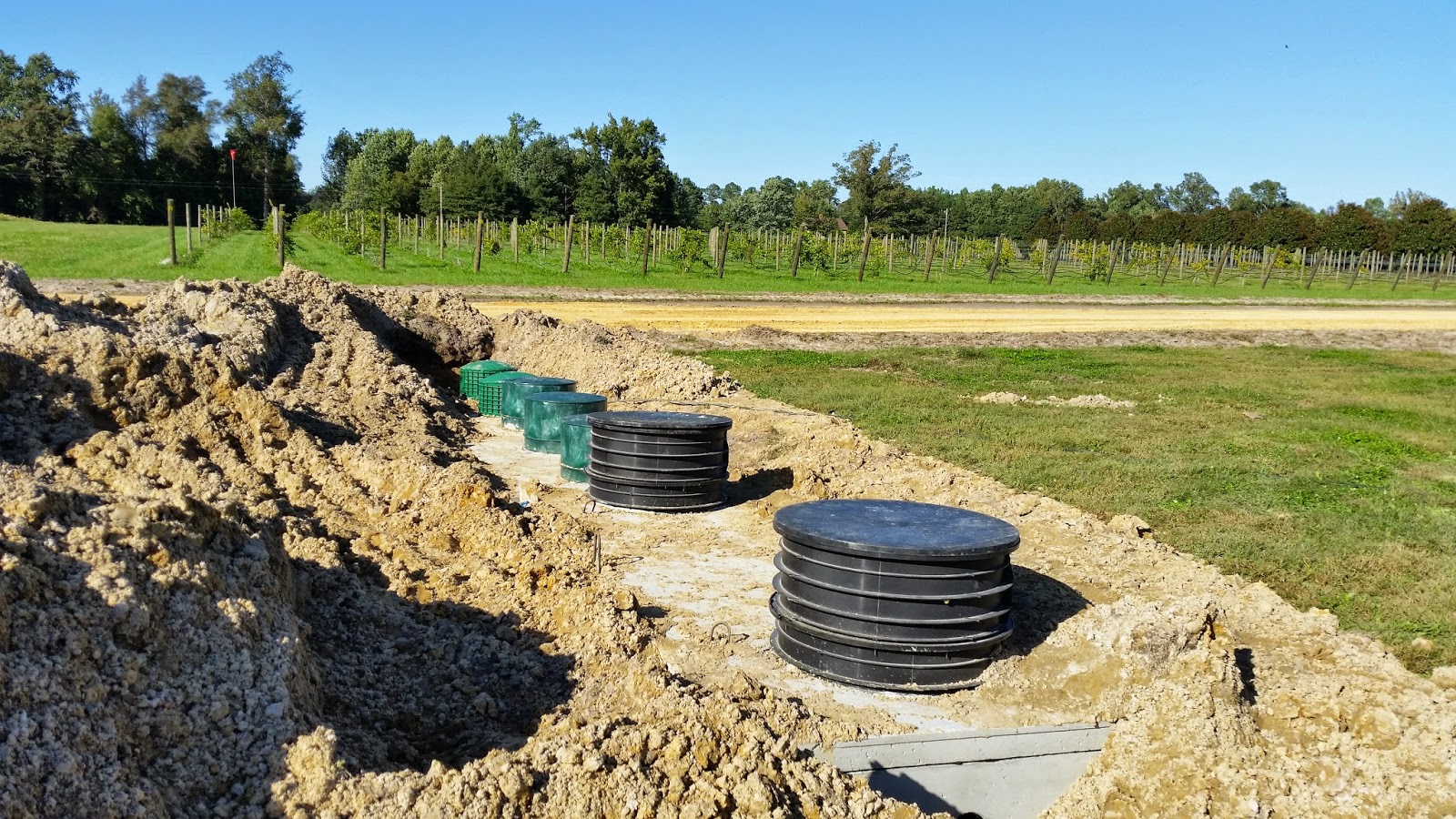 You put the words: "For Public Consumption" in front of any endeavor and automatically someone in the regulatory system recognizes that "whatever goes in must come out". Hence a septic system that resembles a 7 silo rocket launching facility. Unlike private residential septic systems where the homeowner can quietly cover up the access panels with a few inches of dirt and sod, a system such as this requires geo-engineers to design a system that includes three huge concrete tanks and seven manholes (all visible to the tourists we hope to cater to), 2 control panels and multiple pumps, one of which is intended to grind up solids before transport up hundreds of feet of discharge piping to a drain field. I think it is intended for that occasional use by three busloads of retirees, all of whom have "issues" and need the trip to a winery to use their rest rooms. Geez.

Any way, the area in front of the new building was dug out to allow the tanks to be dropped into place. As I mentioned in a prior blog, this needed to be done before the seasonal rains came in. If the backhoe went down and broke through the water table such that water pours in faster than the hoe could remove dirt, then these concrete tanks, as heavy as they are, would begin to float in place, much like an aircraft carrier. Not a great way to place and locate them in position so they could be tied together.

The contractor completed his work in about a week, grading the area around the "silos" as best he could, but recognizing the final grading and landscape work would be done months later. Shy of testing the system (of course, it needed to be tested), he felt he was done. That is until I looked over from a distance and said "No way".  The black silos were almost 2 feet out of the ground; about as ugly as it could be designed. Apparently the engineers that came up with this system didn't consult with an exterior landscape designer or have any understanding of aesthetics. But I'm sure it was operable!

The testing was scheduled for a few days later. So here were all these guys standing around. A couple of electricians to temporarily wire up the controls, another two guys who installed the system(who had a personal interest in getting paid), the G.C. and his son, the system designer, and me. Everyone kinda just stood there looking at each other until I decided I was going to be the first one to ask the first dumb question. Once that got out of the way, questions flew in all directions among these contractors, who up to that point just did their job without understanding the bigger picture of an operating system. I also voiced my displeasure with the height of the 2 black manholes; the contractor quickly got on it and removed 12" from each. The tests then got underway.

Garden hoses were run from my house to fill the concrete tanks. When the power was made available from a portable generator, the pumps were then started. There are two of them: one to grind the solids and another to send the pulverized waste up a slight incline into the discharge field maybe 200' away. The designer had certain specifications he was measuring against, and this was basically the number of gallons that could be moved in a specific time period. If it was too fast or too slow, the controls had to be tweaked for adjustment. If you removed a lid and looked inside of one of these silos, you'd see float valves and even more electronics controlling the movement of  excretions. Even our personal discharge has gone high tech. Ugh. Really, is this necessary ?

But when it was all said and done, regardless of how efficient the process is or the value it silently adds to the operation, the fact remains that is an eyesore. We are open to ideas, but our latest is to border the front lawn with boxwoods and then plant pachysandra all around the silos such that they will eventually cover them up. Or we could build tables over them and use them as footstools for a front cafe area (no, I'm kidding !)
Posted by Dave at the Vineyard at 4:53 AM