The harvest season for us is nearly over. Though we still have some grapes to pick (Nortons and Scuppernongs), they won't be ready for another 1 1/2 to 2 weeks. Our attention lately however has been devoted to the French vinifera, where we picked tons of grapes, first whites, and then the reds. They have already been put through their paces getting them well on their way so they can "just hang around" in the stainless steel fermenting tanks, mellowing out for the next 5 months prior to bottling in February. 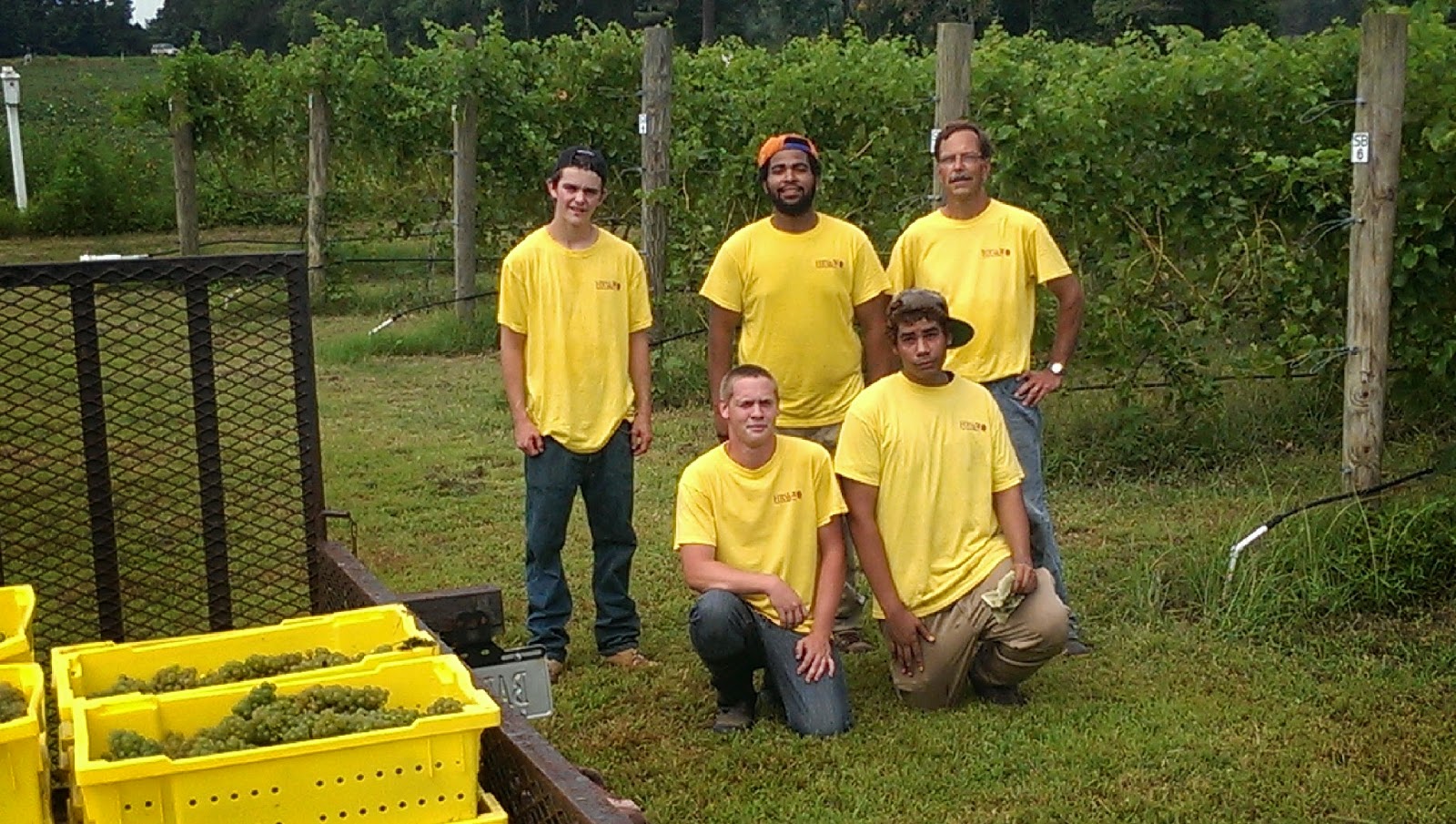 We had a great crew working with us this year. And though they seem motley, the fact is that these guys just clicked. I try to train as best I can, telling them the hows and whys for what they are doing. There is a definite step by step process we follow as we prepare the vines for picking, and then finally getting down to the task of clipping off the clusters one at a time. They were able to anticipate where the work was needed to be done, jumping in whenever extra hands were needed. They also grasped the flow of the operation to eliminate unnecessary movement, efficiently getting the grapes into the lugs, then onto the trailer for shipment back to the winery some 11 miles away.

Preparation for the harvest really began several weeks earlier by putting the shoots in place and then removing any leaves around the fruiting zone. This left all the clusters visible and easy to grasp and snip.This crew of yellow-shirted dudes pulled in 3 1/2 tons of Seyval Blanc in 3 1/2 days, and that included all the processing too, which included destemming, crushing, and sending through the press to remove the skins and seeds from the juicy pulp. This resulted in about 1500 liters of fermenting wine, enough to make 2000 bottles of dry white table wine.

Two weeks later this crew with the help of 2 more harvested the Cabernet Franc and brought in another 2 tons of grapes in only 12 hours. I shouldn't need to remind you that this is after an entire season of working with these grapes as I have described in prior blogs.

This was also the first year we purchased grapes from another vineyard to supplement our own vineyard production. 500 pounds of Petit Verdot were brought in one Sunday afternoon and Diane and I processed them into our MacroBins to begin the fermenting process, where they would soon be combined with our own grapes.

The 2014 season will soon be over, but that only signals the start of the 2015 season. Preparation for next year starts right away; more on that later.
Posted by Dave at the Vineyard at 5:09 PM