Houston. We have lift off.

A farm requires the need to have a variety of new "toys".

Remember when you bought your first house? It seemed at the time that the trip to Sears always meant coming home with a new tool. A hammer, a saw, pliers, wrenches, and on and on. These tools quickly built up to being able to handle most home projects. From here it was time to step up. All the tools one could get for under $25 were already had, and that meant the next tier of tools was required.....all those under $100. A power saw, electric hand drill, belt sander, a saber saw (we now needed multiple saws to do different tasks), some fancy saw horses, maybe an electric screwdriver. We had moved from just fixing things to now making minor adjustments and alterations to what had been working for years.

But that is not where it stopped. There were still tools to be had under $250 ! Table saws, a drill press, planer, belt/disc sander, and ultimately a radial arm saw that could cause real damage in the hands of someone less skilled.  We were now into remodeling, major construction, building decks, you name it.

But I digress. For the last 4 or 5 years I have dedicated pages to weed control, and to spraying fungicides on the vines. I had been using an augmented Fimco Sprayer (buy these at any Tractor Supply or similar store). It was just a big tank with a boom sprayer attached. Instead of using it in typical boom fashion, I had turned the booms 90 degrees, and flipped the 2 sidearms up so that they were parallel to the vines, instead of aiming towards the ground as originally designed. It seemed to work, even though I was never quite happy with how well it got the chemicals distributed.

And then last year we had an absolute disaster just before harvest. We had been watching the grapes to achieve their final BRIX, and then the weather flipped and became horribly hot and humid. That is a bad combination, because every latent spore multiplied and fed off the sugars in the grapes. Beautiful grapes became shriveled masses.....our harvest was diminished by tons.

I vowed never to let Black Rot, Downy Mildew, Sweet & Sour Rot, or Powdery Mildew get the best of me again, and the way I was going to attack this issue was to upgrade my sprayer and be very, very diligent in maintaining my spray program. At the time this blog was written, I have already sprayed three times....a spray every 6 to 7 days. Chemicals like Manzate Pro-Stik, Phostrol,and Sulfur are the mainstays, but later I will be adding Quintec and a host of insecticides like Sevin and Malathion in as much as Japanese Beetles (who absolutely love grape leaves) will be arriving the first week of June. 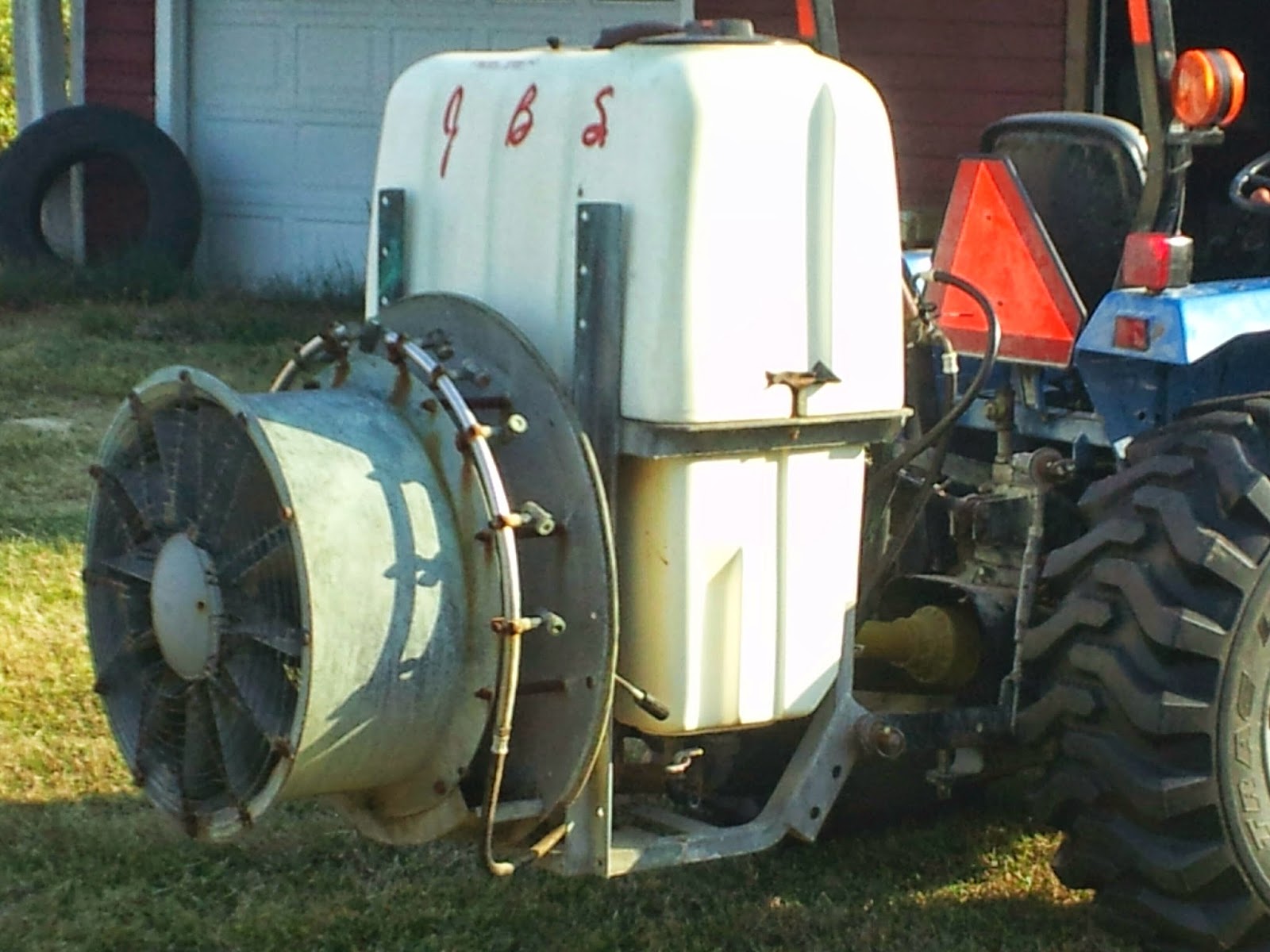 This new sprayer, a John Beam, is like strapping a jet engine onto the back of the tractor. The high speed fan sends a fine mist using its air blast design through the leaf canopies and across several rows at once. No side of a leave goes without coverage. It's quick too...in 4 hours I can spray both of my  fields which are 11 miles apart. Now with that being said, because it sprays so fine a spray, I have to put on a hazmat suit and respirator. Give me a fighter pilot's helmet and I am one step away from flying mach 1.
Posted by Dave at the Vineyard at 6:44 PM