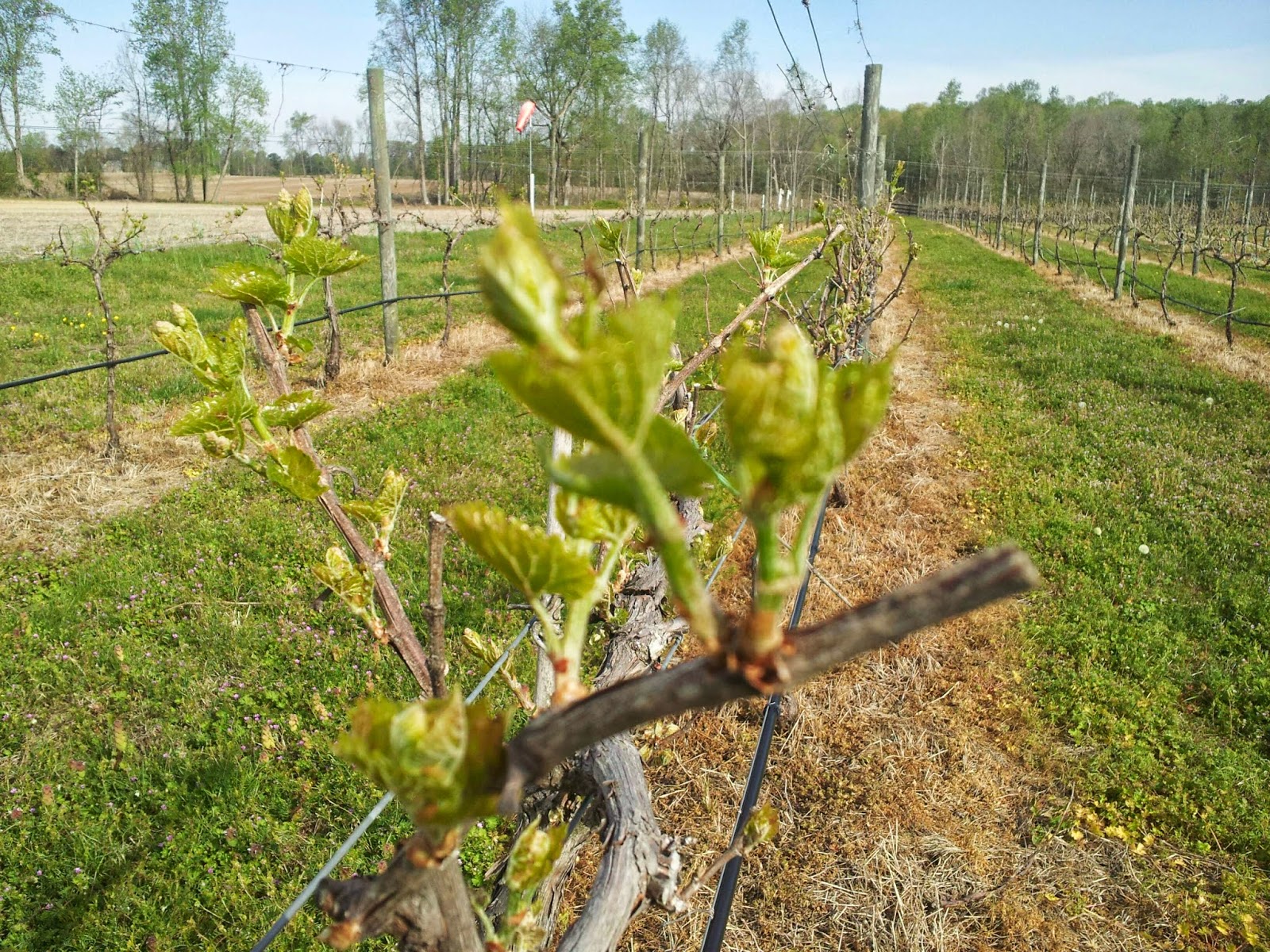 It has only been a week since the vineyard proclaimed that Spring has arrived. Buds have opened up and started to grow.

Vineyards and the activity of the grapevines has to be one of the most documented horticultural events there are. There are 47 defined life stages of a grapevine, with bud break actually being #4, and the  2 - 4 cm shoots with 2 or 3 leaves separated being at Stage #9 as seen above. Things change very rapidly in the vineyard this time of year.  We will watch as we get even more leaves, 10, 12, up to 16 or so as we also see the beginning of bloom......the start of little fruit clusters.

When we last pruned during the dormant season we left more buds than we ultimately desire. We are looking for about 24 buds that have fruiting character; 12 on the left cordon and 12 on the right. Basil buds, those that are near the cordons, generally don't provide fruit, but they are the beginning of replacement spurs should we need them. We have put the herbicide spraying behind us, and on Monday we will be putting down some 33-0-0 fertilizer. about 1/4 cup , at the base of each vine. We'll start out fertilizing 3000 vines, but eventually all 8000 will need to be done. After that it is a mad scurry to perform final pruning on all the vines to get to our final bud counts before the shoots get to be about 10". If we delay beyond this then energy will be channeled to areas we don't want.

Right around bloom the necessity to begin our spray program takes top priority. I have yet to calibrate the new sprayer we got....maybe later this week. Other than gasoline to power the tractor, trucks, and ATV, spray chemicals are the second largest expense in a vineyard. But without them, we might as well write the season off. Where we are the climate is both hot and humid; conditions that make it ripe for fungus growth or insect infestations. These are problems that California doesn't have any where near the level we have in the Mid-Atlantic region. I just finished a report on "going Organic" and objectively decided to try this in Virginia is the kiss of death, for being organic prevents one from using all the tried and true methods for keeping these diseases or bugs in check. There is one certified organic vineyard in Virginia and it does not appear they are close to profitability. To wave a banner and go broke  is not a good business model.