All's Calm In The Pasture

Since my last post regarding my cows, there have been some tense moments that have led to some emotional (not really) decisions to be made. Shortly after the late evening escape covered in my "It's All About The Moods" post, the herd managed to escape again and have an early morning jaunt over to the same farm they had visited a few nights before. The downside to all of this is that I no longer had my trusty farmhands (Rich & Chris) to help me herd them back.

Just as before the resident farmer gave me a call and told me where to find them; a good half mile away. They were adjacent to a fence in his northern pasture, sort of watching other cows and a few eager bulls as they nibbled on some short grasses under the barbed wire fencing. I was cold, and tired, and frustrated, and worst of all alone. My limited experience told me that trying to get them moving in the direction I wanted, being alone, was more likely going to end in failure as the cows bobbed and weaved from my blocking of escape pathways. It is not unlike them to start heading in the right direction, only to have them take a wide u-turn and go right back to where you  had them a half hour earlier. And this was the case today too, until all of a sudden Charlie (who owned the bulls and cows on the other side of the fence) came driving through with his pick-up truck to cut them off and start pushing them away from his bull....whose only motivation for staying on his side of the fence were an ample supply of females he called his own. My 4 cows however provided the bull with new conquests, and Charlie didn't want a bull to escape to satisfy his appetite.

So Charlie and I drove our trucks as if we were riding ranch horses, across fields that had hardened up enough so our wheels wouldn't sink in. The fields had corn last year, and the thought crossed my mind that with all of these short corn stalk spikes one would eventually spike through a tire. But the task at hand was to move the cattle back to the farm and all we could do was hope nothing else happened to interfere with this mission. Amazingly it went well, and the cows went to their pasture as hoped.

With my mind rattled, though some calming was now evident, I got on the phone and called the guy that I had bought the cows from and asked if he knew someone that I could sell my 2 trouble makers to. T29 and U204 took great pride in crashing through fencing for their nightly ritual of exploring the surrounding neighborhood. I had to make a business decision to at least get rid of these two cows that were causing all the grief....not that all the others didn't follow their lead on these great escapes.  I was lucky to find out that there was a rancher in the next county that had a red angus herd, and would be willing to buy these two cows and their unweaned calves to supplement his herd. He couldn't pick them up soon enough !

By the next day, with some difficult coaxing needed to move these 2 cows and 2 calves to a loading pen, he came and picked them up just hours before he was scheduled to go on vacation in South America somewhere. I am very glad he saw the need to grab them before he took off, which would have meant another 10 days of unhappy adventures.

Cutting my herd in half helped to solve my problem immensely, but it wasn't a cure all. The 2 calves that remained with their more reserved mothers still had an adventurous streak, and they would easily crawl through the loose barbed wire fencing that still bordered 2 sides of my pasture.  I had put electric fencing up on the west and south sides by then, but I had the 2 remaining sides still to do.

So one morning I woke up and here the four of them were, eating the grass in my back yard. My yard is surrounded by a tall picket fence which I decided was a good place for them to stay to bide me the time to complete the electric fencing around their pasture. I closed the gates and for the next 3 days I threw baled hay into my back yard, which given food and a place to drop their plops they seemed fairly well at home. When the fencing was done, I "scheduled" a half day to gently move them back into the pasture.

Since then they have been fairly content. No break outs. No bad behavior. The replaced fencing has kept them in and allowed me to get many a good night's rest. They have been fed either roll hay or bales every day, and with it nearly the beginning of April I suspect that grass will be growing soon so I don't have to keep feeding them. The calves are getting rather big now; I am guessing they are easily 400 to 500 pounds each. From a distance it is hard to tell them from their mothers. They are still sucking down their mother's milk though, which probably won't last for too much longer. The moms will want to kick them away soon; they are getting too demanding and too large to keep hanging on. 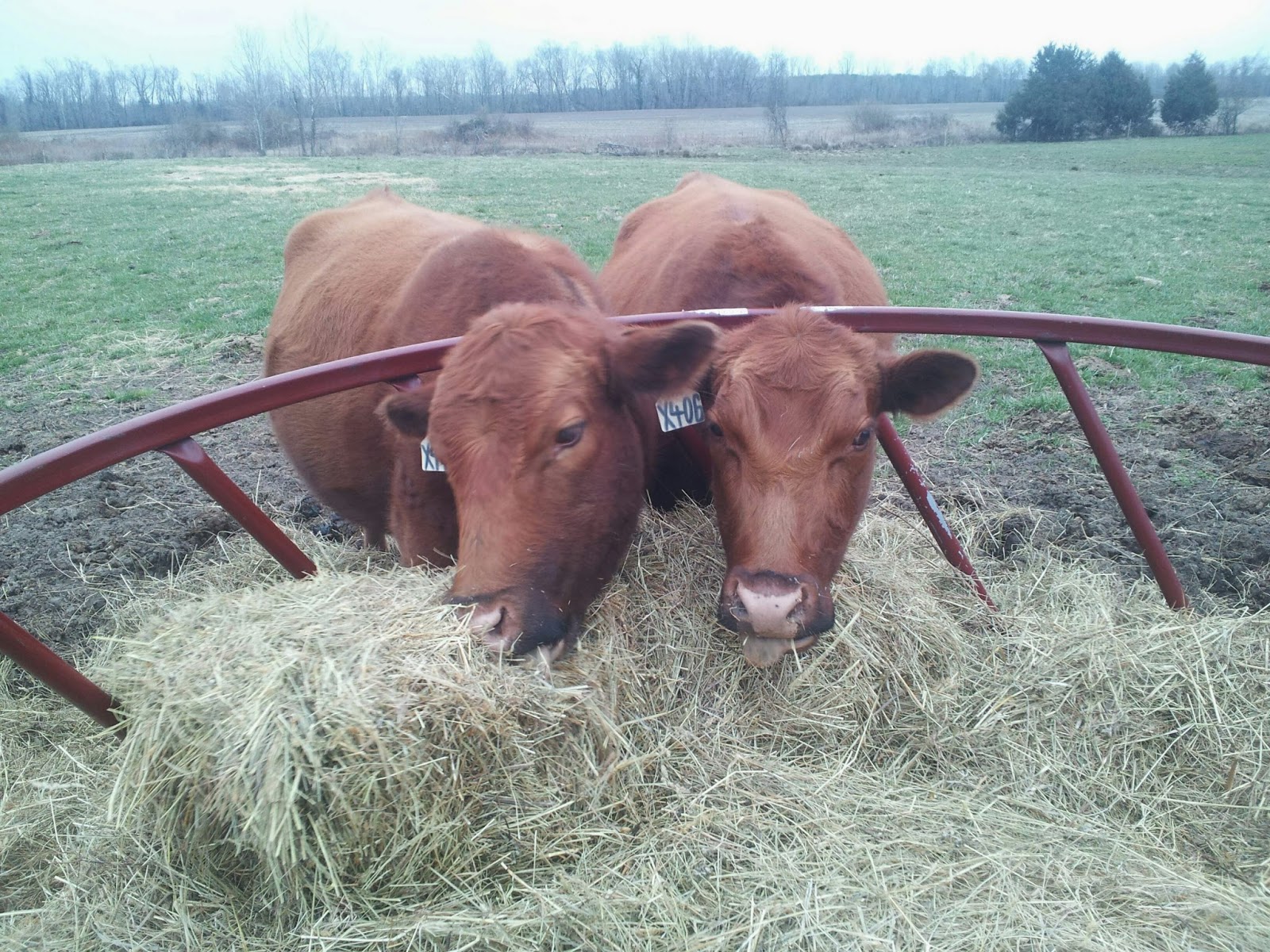 Posted by Dave at the Vineyard at 5:04 AM