It's All About The Wine

Though my rants and stories tend to center around the vineyard and my cows, making of the wine is the ultimate goal in any season. When harvest occurs back in September, it seems that all the work is done and winter time projects begin to take hold. However, during this time the grape juice is patiently going through its task of slowly fermenting, letting its solids drift to the bottom of the tank, and bringing on the character that will define its taste and aroma profile.

It has been about 6 months since we picked the grapes. Our Seyval Blanc came in with our first real harvest of just over a ton of grapes. We lost quite a few from a late season heat & humidity spell, tainting some of these grapes, and our reds were clobbered by the latent mold spores waiting for the opportune time to attack.  But this is real farming, just as soybeans, corn, cotton, and peanuts are that are grown in the rest of the state.

Picking and crushing, along with destemming and initiating fermentation all occur on the same day. From there comes a series of steps that include pressing, more fermentation requirements, and a possible racking or two.  And then it is time to wait for the process to take hold, expelling CO2 as the yeast does its thing by converting the sugars into alcohol. A month or so later we might rack again, which takes a few hours. This might be repeated several times before we finally decide to bottle. After 4 or 5 months we begin our taste tests, checking for mouth feel, acidity, alcohol level, and clarity. There are things we can do to pull some of these traits towards making the best wine possible. If there are particles still suspended in the wine after these rackings, we may add some Bentonite which helps clarify the wine........we will also send it through a filter just before bottling to provide one last opportunity at making the wine visibly clear and showing the color of the wine as it should be.

Rich and I were assigned bottling duty this year. It needs to be done while it is still relatively cool out, and before the vineyard pulls us in that direction for the next growing season. We found a day this past week, the fourth week in March, where it was just too cold and rainy to get anything really accomplished in the vineyard. So the winery found "willing volunteers" to get the bottling ready and in motion to bottle last fall's harvest. Bottling isn't hard but there are a few steps that need to be handled well, and with some kind of poetic balance between Rich and me so we don't trip over each other. We start by cleaning everything which takes a few hours. Tanks, pumps, hoses, fittings, machinery, and ultimately the bottles all need to be flushed with a sanitizing solution. Only then can we move forward and begin sending wine through the hoses to get to the filling machine. We have gone through these motions before, and each time we get a little more efficient. And each time we make notes on how to do it even better next time.

I have been chosen the "filling guy", using a 4-station filler to top off the bottles with the right amount of wine. From me the bottles are transferred to a side table adjacent to the capper where Rich puts a cap on top of the bottle, inserts it into the machine, which then spins a chuck down on the bottle simultaneously making threads in the cap as it seals and caps the bottle. We just bought a new capper chuck from Italy this year, and this was our first time at using it. It performed perfectly......we have found that the best winery equipment comes from Italy. 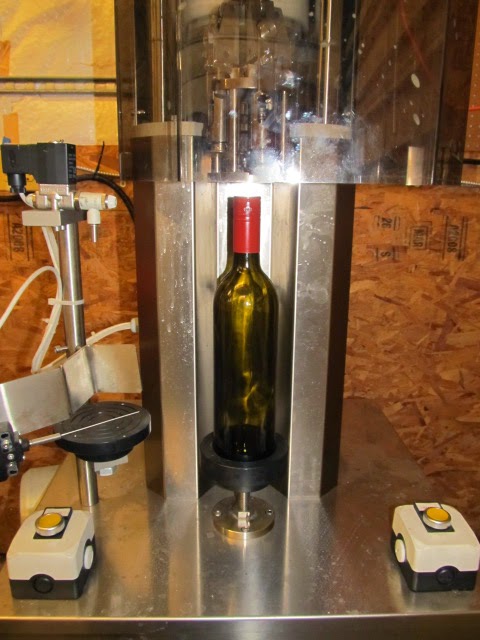 It took all day to bottle 762 bottles of our inaugural edition of our Seyval Blanc. It is not like a Pinot Grigio or a Chardonnay. It is not even like a Vidal Blanc, another white French hybrid. It has its own flavor. Some citrus, some grassiness, a hint of vanilla. Can't sell it yet, at least not until we get our state ABC license. For now it will have to mellow out in the bottle; Diane seems to think this will take about a month.

I remember staying on my Uncle's farm in the Catskills during the summers. He had a hundred or so Holsteins that he milked every day. When his family needed milk, he would bring out a pitcher and milk right into it, carrying the fresh white stuff into the house and putting it into the refrigerator for later consumption. We have started a tradition here, not unlike his. At the end of our bottling we had some wine that was the last to come through the hoses, or just a portion of a bottle that we wouldn't be capping. Rich filled a pitcher for our dinner that night, and it was very good even without the mellowing Diane is allowing.
Posted by Dave at the Vineyard at 10:16 AM