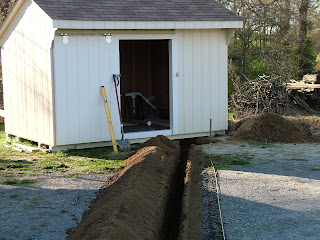 The remainder of 2008 had one major theme....getting water to the vineyard. Ed was spending hours lugging water from the well to the vines via the 55 gallon drum method. Surry County was in its 2nd year in a row of drought conditions and getting water to help the vines survive was paramount.
The rest of his time was mowing, or doing all the little things to help the cause. There was little time for weeding, though he squeezed some time in for drilling those wire holes we now needed to hold the drip system piping.
Every trip I took had irrigation as the priority, so, recognizing it might take me twice as long to figure out how to do it, Glenn Slade made a recommendation whom I contacted to help jump start this project. Scott Wright was a retired Va.Tech guy who was an expert in irrigation systems. Though he spent most of his consulting efforts on golf courses and new developments, he took on the challenge of a vineyard. With my significant weakness in Fluid Dynamics in college, he was able to quickly calculate the size pumps I needed to pull water up hill from our source, get it through all the filter systems that we had lined up, and then shoot down the driveway over a quarter mile to get to the end of the rows, taking into consideration the pressure loss over that distance.

It was more than just a tinker toy set to assemble. We needed to pour concrete to make 2 pilings to support the first in line self-priming pump (there is a real play on words) near the creek, make our equivalent of an aqueduct to get the water up 20' or 30' of hill , get a shed built to hold all the equipment, design a manifold system for the first block and allow for all the subsequent expansions, not to mention getting it all wired up with 220v and run all the pipe.

We now recognized that we had alot of work to be done, and it wasn't going to be done overnight. Ed dedicated his time to drilling the holes and running the wire, and when that was done he stretched out the drip lines and installed all the drippers ( 1/2 gallon per hour)......one for each plant. This took him into the Spring of 2009. As for me, I spent all my time on the forward end. Figuring out where to put the pilings and getting them ready for the concrete, making the small design changes I wanted on the shed, which Amish Sheds out of Petersburg was able to do in a very skilled timely manner, and then after it was delivered (dropped in place on a dime I might add), I assembled the irrigation system just as Scott had designed it. With a few twists and turns, a missing part here, an additional part needed there due to extra bends in the flow or my particular required quirks, I got it finally together in mid-Winter. It was time to get an electrician in to do the first half of the wiring, which included all the hook-ups, electrical panel in the pump house, and tieing the the creek pump to the main box.

The 2nd half of his wiring had to be held back until we made all the trenches for the pipe. He needed a trench to bury his source line which came 89' across the driveway from the service barn. This was scheduled for April (April seems to be a popular month in a vineyard) when we hoped everything else was all wrapped up so we could dedicate our time to dropping almost a mile's worth of pipe and tieing it into the 41 drip lines that Ed had put together during the winter.

Our vines were now dormant during this winter period. It wasn't particularly cold by northern standards. We had done our inventory in late Fall to see how many vines we needed to replace that didn't make it through that first year......maybe a hundred or so.

We had decided to make 2009 a "recovery" year. We just had too much on our platter to deal with to worry about an expansion. We had to finish the irrigation system or it would have been crazy to hand water all these vines 2 years in a row. We needed to replant some of the vines. We needed to start and maintain a spray schedule. We needed to do some serious pruning to get the vines trained on the trellis. And we had to resolve the weed issue....somehow.
Posted by Dave at the Vineyard at 4:55 AM