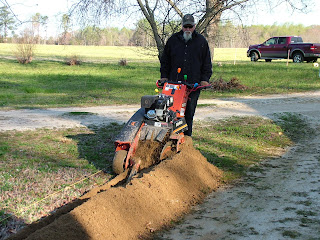 2009 was a year of few setbacks, mostly being progress measured in small steps and renewed optimism. The irrigation project was still front and center as we entered into the early Spring. The electrician had completed his work in the pumphouse, along with wiring everything he could do short of the hooking up of the main line which required the trenching. Ed was as determined as I was to get the system up and running. He still had memories of his watering last year, and he saw the emphasis that had put on getting it all in and I think he just wanted to see it in operation....finally.
We found a rental place in Petersburg that had Ditch Witch trenchers so we rented one for a week's time. I personally didn't have a clue as to how much time was involved in digging all the trenches we had in mind, but a week seemed an adequate amount of time to do the job. Ed picked it up one morning and with it we were off to the races.
First, the trench for the electrical lines. Ed had run one before, so he felt comfortable taking this machine and starting her up. Just aim Ed and he was off. This machine, if you've never seen one in action, resembles a huge chainsaw on wheels. The chain and bar gouging the earth and sending the dirt off to the side with no effort at all. It could do a couple of feet a minute, digging at a depth of 18" to 24". Here we found a use for the now infamous yellow plastic line with all the colored tape markings. Ed needed a guideline to follow, and since you have to walk backward when digging a little guidance to maintain a straight line came in handy. Within a short period of time the first trench was done, whereby I immediately called the electrician and told him we were ready for him to hook-up the complete irrigation system. He would come the next day to finish the job inside of just a few hours.
Now we were ready to go from the pump house down to the vineyard. Line of site , along with the yellow line got us to the driveway, and now we had to sort of follow the road. We made our guiderope 15' from the center of the driveway, where the only real issue was missing a telephone line that was buried near the house. The utilities have what is equivalent to our "Dig Safe" up north, and they had come out on one my previous trips to mark its location. When all you need to do is make a trench, progress seemed to advance rapidly. It is just a matter of grinding it out so to speak, and taking a turn down by the vineyard to make a trench that follows the end of the rows. With the power now hooked up, we could almost feel the excitement in the air as we were getting near to the end. Well, not quite. We still had to assemble all the PVC pipe, where the major run was using 2" diameter pipe. But that was later in the week, and lugging all the pipe to its approximate location needed to be done first.
A mile worth of pipe is alot of pipe. Even though we had only a quarter mile run down to the vineyard, we were putting pipe in for the next 2 or 3 year's worth of expansion. The vineyard was defined as Block 1, and along the way we passed by 3 future blocks that would eventually need irrigation. With that in mind, and the complete manifold already part of the pumphouse planning, it was decided to run the major lines to each of these blocks too. In the trench then we initially ran 4 lines, and as we got to the junction for each block we capped the specific pipes off, locating them on the surface with a identifying marker, and then continued on. Once we got beyond Block 2 which was just "upstream" from Block 1, we just had a single pipe to contend with.
As we approached Block 1, we took our bend and surfaced by the first row nearest the driveway. Here we have a final filtering and pressure regulation for the 41 rows of drip lines. Once tied to this, we dropped back underground and proceeded down the end of the rows, putting in tie-ins for all drip lines. The tie-ins popped above the surface at the end of each row, theoretically being protected from mower damage by the end post lines and anchors once in place.

We had come a long way, but once again my week ran out and I had to return to New England with the job unfinished. There was still more work to be done by Ed in the meantime to get the irrigation system finalized. There were a dozen or so drip lines that had to be installed. And more drippers had to be inserted above some of the plants. Spring was with us also, so Ed's responsibilities of mowing were started up again, and we had gotten our replacement vines in that needed to be planted where the dead ones had been identified. I was gone but eager to get back; we were so close to getting the irrigation system in and the weather was due to get warmer. The vines needed water and I was determined not to have Ed carry it in his truck like last year.
Posted by Dave at the Vineyard at 9:06 AM