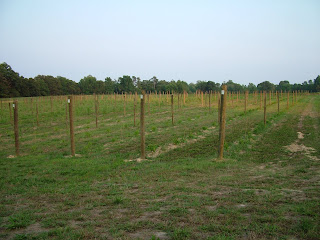 The hydraulic post driver was now fully operational, and on my return trip this was the top project for Ed and me. All the vines had been planted, and during the last couple of weeks Ed had been trucking water back and forth from the house well to keep the new plants watered. With 2000 vines at 1/4 to 1/2 gallon a day, that's alot of trucking. Ed was probably the only one wishing for non-stop rain just so he could skip doing it. It wasn't like he was carrying pails upon pails; he had a 55 gallon drum in the back of his truck that he filled and then used a standard hose with "gravity feed" to water the vines. It was still alot of work even with this. Couple this with the mowing he did weekly, and a certain amount of weeding, and you can see how his time was spent.

When these poles were dropped we only had half a clue as to how we were going to proceed with the job. One of the things we did was break all the bundles, determine which end would go in the ground, and predrill our first wire holes that were to be 18 inches above the ground surface after they were pounded in. It just made sense that it would be easier to drill them lying on the ground instead of in a vertical position. We loaded about 20 poles at a time onto the pickup truck for distribution, using the tape marks on the yellow rope we had also used for plant location. This is when we found another problem. Turns out the rope really did stretch, especially over 450' of row length, and that everytime we moved the rope a bit to plant the vine (or auger the hole), the rope was really pulled out of position, affecting every location down the line. What a mess. Plants were to be 6' on center, poles 24' on center. Putting the first vine 3' from the first pole, then going 6', 6', and another 6', (leaving 3' to the next pole) we would be giving each vine 3' in each direction for trellis training and growth. Our actual measurements were close at best, and putting some plants literally on top of a true pole location at their worst. It bothered me (and still does) to no end how 2 educated guys couldn't get a simple pole / plant layout to work in a simple grid pattern. We did the best we could though, compromising in some areas and moving vines in others. We decided future layouts would use a steel cable only, and discard this rope idea.

This problem, though accentuated by this rope idea, was really due to not getting the poles in the ground first. Pole pounding is a long tedious process, and we wouldn't have been so inclined to use the yellow rope if we only needed to be true on center , which we used a surveyor's transit for, and be 24' apart, easily measured by the cable or a long tape measure. Once the poles are in, laying out the plants would have been easy.

There are 2 sizes of poles. The 10' long end posts, that are 5" - 6" diameter, that go 3' into the ground, and the smaller much easier to handle 3"-4" line posts, that are 8' long and go in the ground only 2'. Though the hydraulic driver was able to handle the end posts, it did take seemingly forever to drive them in. Remember, the posts have blunt ends and had to go in 3'. Driving straight down, with all the earthly resistance , is a tough job even using hydraulics. It maybe took 15 minutes to pound one in, and we had 82 of these to do ! We resolved the time issue by using a post hole digger to start the poles, digging down maybe half the required depth and letting the driver do the rest. It cut our time in half, thank heavens. And you couldn't even get these to vibrate once they were in. Line posts comparitively, were a snap. Their biggest issue was because they were smaller, if they hit a rock or a hard spot they would go in crooked. Though we were really aware of this, Ed ended up digging out maybe 20 of them to straighten them . The vineyard was now easily identifiable when someone drove by on State Route 10. There were nearly 500 poles in the ground, dwarfing the vines they would someday support.

As you can see, it took some time to do this part of the job. Oh, and those pre-drilled holes ? We couldn't see them after we brought the poles out and put them in position, and the poles sometimes twisted when they were put in, which would have twisted the wires had we used them. We also changed our minds sometimes on which end of the pole should go in first. Enough of that. We gave up and just decided to ignore the hole locations and to drill them later. When we finally got to this, we set up a portable generator on the back of the truck and used a drill with a level on its face to keep it aligned, and placed the bit on a jig that located the hole exactly 18" above the ground. It was much easier than we would have guessed, and alot more accurate.

When we finished with the hole drilling, it was now time to run the lowest wires. Bamboo stakes were used to support the vertical growth of the vines, but the wires were needed to run the black flexible PVC pipe needed in the drip system. But now was the time for chasing the latest problem, and strange as it may seem getting water to the plants efficiently had to take the back burner. We were getting eaten alive by Japanese beetles, which came out in droves on June 1st. And with the hot humid days before us, weeds as well as airborn fungi & mold became our primary concerns. I raced out to our local AgriSupply (local is 50 miles away) and picked up a backpack sprayer. We only had 2000 vines, and none of them were above knee high yet. I felt it would be able to do the job. Wrong again. A backback sprayer only held about 5 gallons, which didn't get us very far. The very next day I raced out once again to pick-up a 55 gallon ATV-sized sprayer which I put in the back in my truck, locked and loaded to spray the vineyard.

The good news ? 55 gallons was enough to do the entire vineyard, riding along down each row in my truck, using a hand wand to direct my spray on each vine. The bad news ? Though the rows were supposed to be 9' on center, they weren't, and I got my truck wedged in-between 2 endposts, bringing my nice shiny truck to an end. There was no debate on which was the immovable object. The truck now has "personality" with what I call "story lines" on its right side showing that this is no longer a highway truck, it is now a working farm truck. Needlesstosay, when Ed saw what I did to my truck, proclaimed I would get in a boatload of trouble with the Mrs., and that he wasn't going to subject his nice shiny F150 truck to row driving. Once again, Weeds 2 - Opposition 0.
Posted by Dave at the Vineyard at 3:01 PM

Email ThisBlogThis!Share to TwitterShare to FacebookShare to Pinterest
Labels: Looking at the front, Pole Forest