When I give people some advice about pruning, I generally start with telling them that one must understand the natural growing habits of the grape being considered, and from there choose a  training method that best works with this tendency. And then there is me,  not practicing what I preach and a strong advocate of do as I say, not as I do (or did).

When I first planted our Scuppernongs (a cultivated muscadine), I was right in the middle of getting my Masters in Agriculture and Life Sciences. Here is a case of trying to use my new found learning in a practical way. Though anyone in the commercial side of this particular grape knows, it has "trailing" tendencies, which means it runs along the ground in a wild state. Growers however use a high single wire to train these grapes, which makes them look more like they are drooping as opposed to trailing.

Me on the other hand decided I could boost yields and go against the industry norm and try to train these grapes using a 4-arm Kniffin method. So instead of one wire, I could use two, doubling the number of cordons (aka arms or canes), hence increasing my output significantly. I was so proud. 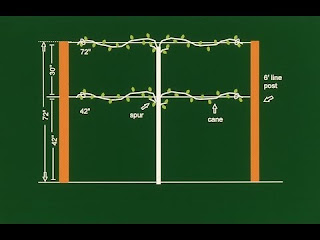 The good news is that Scuppernongs grow like weeds, and inside of two years the vines grew up to both wires and created these cordons just as I planned. A major problem was seen at this point however, and that was that the upper set of arms appeared to be stunted, with the lower set seemingly getting all the nutrients. Comparatively it was like the size of one's finger versus one's arm. So not wanting to give it another year to see if the upper arms would eventually balance out, I scrapped this training method and went over to another method called Smart-Dyson by clipping off the arms on the very top wire.  This was more in line with the natural growing tendency of this grape. Returning to a single wire support system, it recognized the desire of the Scuppernong to grow both up, and down from it's cordon. 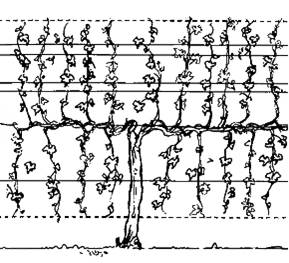 This worked rather well, almost too well. The Scuppernongs grew, and grew, and grew. Many of them filled out the 24' of wire space I had given them, and expanded out into the middle between the rows. Mowing the grass meant getting wacked in the face by grapevines. To thin these out, along with everything else we had to do on the farm, kept getting downloaded in priority.

Harvest came in October as it had in the past. To pull off the grapes meant weaving through all the growth to find the hidden fruit. It was a hard-fought but banner year. We brought in over 2 tons of grapes; 1000 pounds more than the previous year. The additional labor, not to mention the time and the complaints, meant something had to be done. Was it really worth bucking the industry norm for these extra grapes?

With Rich concentrating on the French grapes at the other vineyard, the decision lay squarely on my shoulders. It was really the realization that in 8 to 10 years or so, we are apt to be using mechanical pickers to strip the vines of their grapes, and the Smart-Dyson method of training, at least how it pertained to these muscadines, would have prevented this. So, I held my head down, not in shame for trying something new, but with the realization that the vines needed to be pruned heavily once again. 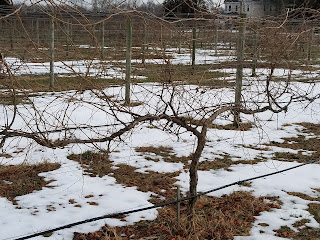 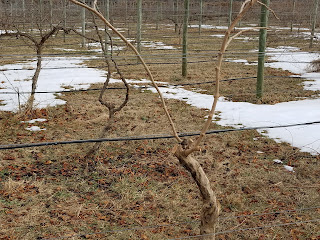 When the cordons were too thick to bend upwards, back to the top wire, there needed to be some major surgery. First I had to find adequate canes to retrain back to the upper single wire, and then cut off the oversized cordons which had now grown quite well on the lower wire. It has been a rather painful experience, both for the vines and me. I can easily spend 20 or 30 minutes on a vine getting it shaped the way it is needed. And in many cases, there are no canes that I can send up to the top wire, so the process would then be to set up some new ones in this growing season, prune the vine as it had been for the Smart-Dyson method, and put the major overhaul for a year from now.

All the while I hope I am not significantly hurting our yields in the Fall by doing all this extra cutting. There are no easy lessons in this business.