Serve Reds at room temperature: "Are you kidding me?"

There are generally 3 questions we hear at the tasting bar, time and time again. These are (1) Do you grow your own grapes?, (2) What is it in wine that causes headaches?, and (3) At what temperature should I serve my wines?

The answer to #1: We grow most of the grapes that are in our wine....there is one however that we don't and for that one we look high and low for one that the winemaker approves of. Surry County with it's hot humid (day and night) summers makes it uneconomical to grow thin skinned whites.

For #2: This is a blog subject in and of itself, so the quick answer here is it could range from over indulgence to sulfites (scientifically not likely, though one can be allergic to sulfites) to tannins and then some. Every body has different tolerance levels for different things, and to choose one thing to pin it on would be too easy.

Now, on to #3: At what temperature should I serve wines? This is really not that hard a question, but it compares to the easy answer one gets on what do you pair with chicken or fish and you constantly get White Wines, of course.

Serve whites chilled and reds at room temperature is the common understanding. Serving whites chilled is generally easy to agree on, since most people keep their refrigerators set at about the same temperature, i.e. around 40 degrees. There are those that set the frig. lower, say around 35 degrees or so. This as a basic setting is OK once you recognize there may be some colder spots on the shelf, and those items tucked in the back might get a little frozen. For wine this isn't much of an issue.....our wine never makes it back where it can get hidden.

As for room temperature, this is where it is very easy to "loosen up the crowd" by throwing the question back to them. "Well, room temperature is room temperature!" they proclaim. Unfortunately, as they are describing it, no it's not. The problem is that in their restaurant experiences this is what they're told, and that is how it's served, the temperature of that room. Yuch! I have been served reds that were stored under stairwells, or against the warmest wall in the restaurant which happened to have the kitchen on the back side. For someone who takes a fair amount of pride in raising the grapes, getting them into the wine making process, and eventually through bottling and sale to the customer, all I see here is the equivalent of torture. These grape juices are still considered young and impressionable and unable to defend themselves.

Room temperature is cellar temperature, not the 70 degree temperature the restaurant thermostat is set at.  According to Master Sommelier Andrea Robinson ( 1 of 23 female sommeliers in the world), she says room temperature was the case when wine was served in cottages and castles! Since people tend to want to deal in absolutes, I say this is about 55 degrees.

Now, how do you get there? What I did was put together a rather unscientific experiment by inserting a chef's thermometer in a bottle, and in a glass of chilled wine and counted the minutes it took to get up to 55 degrees. This was more a measure of pure discipline as I stared at my wine, determined not to cheat and start sipping it. Gosh it took so long. 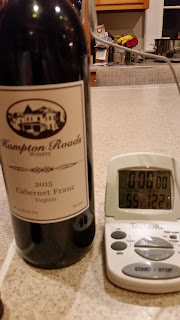 Our refrigerator is set just below 40 degrees and our kitchen was around 72 degrees as Diane started to crank up the heat by cooking dinner (told you this wasn't very scientific, but it makes a point). The bottle took just shy of an hour and a half to get up to 55, while the glass of wine only took 30 minutes. Obviously this is way too long to wait to dive into a good Cab, and it might make you consider keeping your reds in the basement instead of the refrigerator to get them table ready sooner. But if you didn't finish that dry Bordeaux the night before, it is the best way to keep it another day or two with the least possible chance for mischief. I'd rather have a cold wine than a bad wine any day.

But then again, it is rare we put a partial bottle back in the refrigerator to live another day !
Posted by Dave at the Vineyard at 2:28 PM